`` Loki, '' the new Marvel series debuted on Disney + on June 9. Centered on Thor's mischievous half-brother, it mixes time travel and detective comedy and gives pride of place to this deceitful and endearing antihero. A secondary character in the cinema but well developed in the comics. 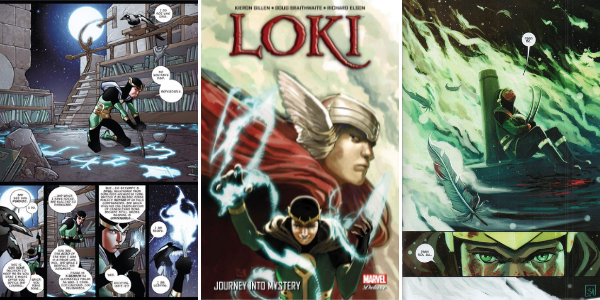 “Loki,” the new Marvel series debuted on Disney + on June 9.

Centered on Thor's mischievous half-brother, it mixes time travel and detective comedy and gives pride of place to this deceitful and endearing antihero.

A secondary character in the cinema but well developed in the comics.

Falcon and the Winter Soldier

, Marvel continues its path on Disney + with a third superheroic series in six months:

. Composed of six episodes broadcast at a rate of one per week since June 9, it features the antihero of the same name, half-brother of Thor and another figure of Norse mythology. Loki, the god of mischief, is a licensed liar who dreams of dominating the Earth. Usual antagonist of the Avengers, he is, in the series, forced to play the heroes in order to save the universe from temporal chaos. An intriguing series that we advise you to accompany with some comics to better understand this character with a thousand faces and recently modernized.

Loki first appeared in 1962, along with Thor, in the SF series

Subsequently become entirely devoted to the god of thunder, for a long time she confines her half-brother to the role of pure villain, mainly characterized by his deceit, with his square jaw and his Machiavellian plans.

By threatening Earth, he even unwittingly contributes to the creation of the Avengers, the group of superheroes led by Thor, Iron Man and Captain America.

, which then reached its number 622, that the screenwriter Kieron Gillen recast the character of Loki. After summoning an entity that destroyed Asgard, to everyone's surprise, the Prince of Lies sacrifices himself to save his own. But he doesn't actually die and reincarnate as a teenage version of himself. The opportunity for a new start on a more virtuous basis? Thor wants to believe it and Loki himself seems to want it. When Odin's belligerent attitude threatens Asgard, it is therefore the god of mischief who leads the revolution. It remains to be seen whether he serves a noble cause or just his interests ...

Edited in one volume by Panini, this gripping story arc, served by the splendid designs of Doug Braithwaite, laid the groundwork for modern Loki, as the general public has discovered in the Marvel films.

Less caricature, more charming, the god of mischief has never worn his name so well as in this story.

This two-volume comic book, published in 2014, is a direct continuation of

. Now a young adult, Loki continues his redemption endeavor by putting his gifts of deception at the service of the Norse gods. He thus becomes "agent of Asgard" and carries out missions for the royal power. But shenanigans are never far away when it comes to Loki and, alongside his official actions, he places his pawns in a game with potentially dramatic consequences.

is an excellent Loki comic book and a writing gem.

It takes a bit to hang on to understand the tricks of the story but the game is worth the candle as the plot is breathless.

Screenwriter Al Ewing plays with temporalities to give more force to his twists and turns and dust off the entire pantheon of Norse mythology through Loki's missions.

Without doubt the most complete comic book on the character.

In addition, the god of malice is described there as pansexual and

(he does not recognize himself exclusively in a feminine or masculine gender).

A great first at Marvel, visible elsewhere on the screen in the

Would you vote for a repentant supervillain? This is the original pitch of

, a political satire published in 2016, a genre rare in comics. A few years after causing the destruction of New York and being defeated by the Avengers, Loki returns to Earth to run for the US presidential election. The god of mischief assures us that he has changed. He even prides himself on being a liar but at least having the decency to admit it, unlike politicians. Quickly, he climbs in the polls, which does not prevent observers and the media from severely judging Loki's supporters and watching with amusement this wacky third candidate, not invited by the Washington elite.

Any resemblance to the rise of Donald Trump… would not be accidental!

was released in the summer of 2016, shortly before the billionaire's election to the White House, and draws heavily on the real incredible presidential campaign.

From the little joke thrown in the air to test opinion at meetings and televised debates, the pages are teeming with winks larger than life.

Despite the somewhat crude drawings, this comic book quickly became cult for its originality and its tone more serious than it seems behind Loki's jokes.

So much so that it directly inspired a sequence in the Marvel series.

The god who fell to earth

The most recent of the four comics in our selection (2019) begins with a contrast: Loki is now king of Jotunheim, the realm of the ice giants, a title he has been chasing for years. Erected as a hero on Asgard for having killed the previous ruler of this warlike kingdom, the god of mischief now has everything to be happy. Really ? In reality, Loki is bored. From Earth to Odin's Palace, from the past to the future, he walks without enthusiasm. A goalless journey that will make him think about his true destiny.

, has nothing to do with the Disney + series in substance. But the commonalities are more numerous than one might think, starting with the portrait of Loki drawn up in the two works, that of a god between two waters. Nice or mean? In this comic book as in the series, Loki questions his inner nature, his dreams and his nightmares, and questions the ultimate goal of his actions. A nuanced portrait that sheds light on the personality of Marvel's most endearing anti-hero.