[NHK] While summer festivals in various places have been canceled due to the influence of the new coronavirus, elementary school students in Hirosaki City, Aomori Prefecture, are trying to paint a neputa in the shape of a goldfish ... 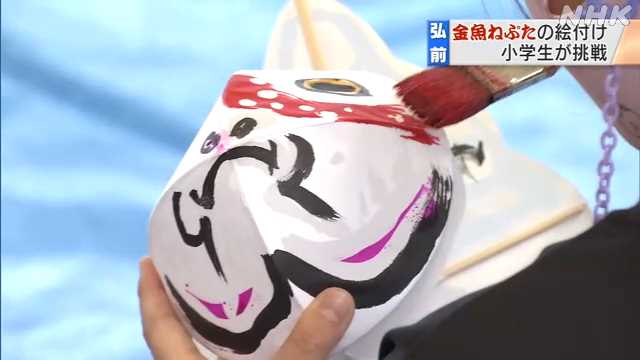 While summer festivals in various places were canceled due to the influence of the new coronavirus, elementary school students tried to paint a goldfish-shaped neputa in Hirosaki City, Aomori Prefecture.

In order to convey the local culture to children, Hiromae City has opened a classroom at an elementary school in the city to experience the production of Neputa and Tsugaru Nuri, and about 60 second-year students from Toyoda Elementary School participated.

First, Mr. Kazuhiro Hiyama, a Neputa craftsman, explained that "Goldfish Neputa" has been handed down since the Edo period and is modeled on a goldfish with a large tail fin called "Tsugaru Nishiki".

After that, the children tried to paint, drawing eyes and gills with ink and dye on a 12 cm diameter goldfish nebuta with Japanese paper, and painting red and pink colors.

In Hirosaki City, the "Hirosaki Neputa Festival", which has been designated as an important intangible folk cultural property of the country due to the influence of the new coronavirus, has been canceled following last year.

At the elementary school, the completed goldfish neputa will be displayed in the school until the beginning of next month.

The second grade boy said, "It was fun. I want my mom to see it."

A second-year girl said, "It was difficult to paint in red. I want to decorate the front door of my house."