Archaeological Petra: Tour guides have lost their livelihoods, donkeys and mules are starving

Hundreds of Jordanian owners of animals transporting tourists in the famous Petra have lost their main source of income after tourism stopped for more than a year due to the Covid-19 pandemic, and they are now unable to feed dozens of starving donkeys, mules and horses. 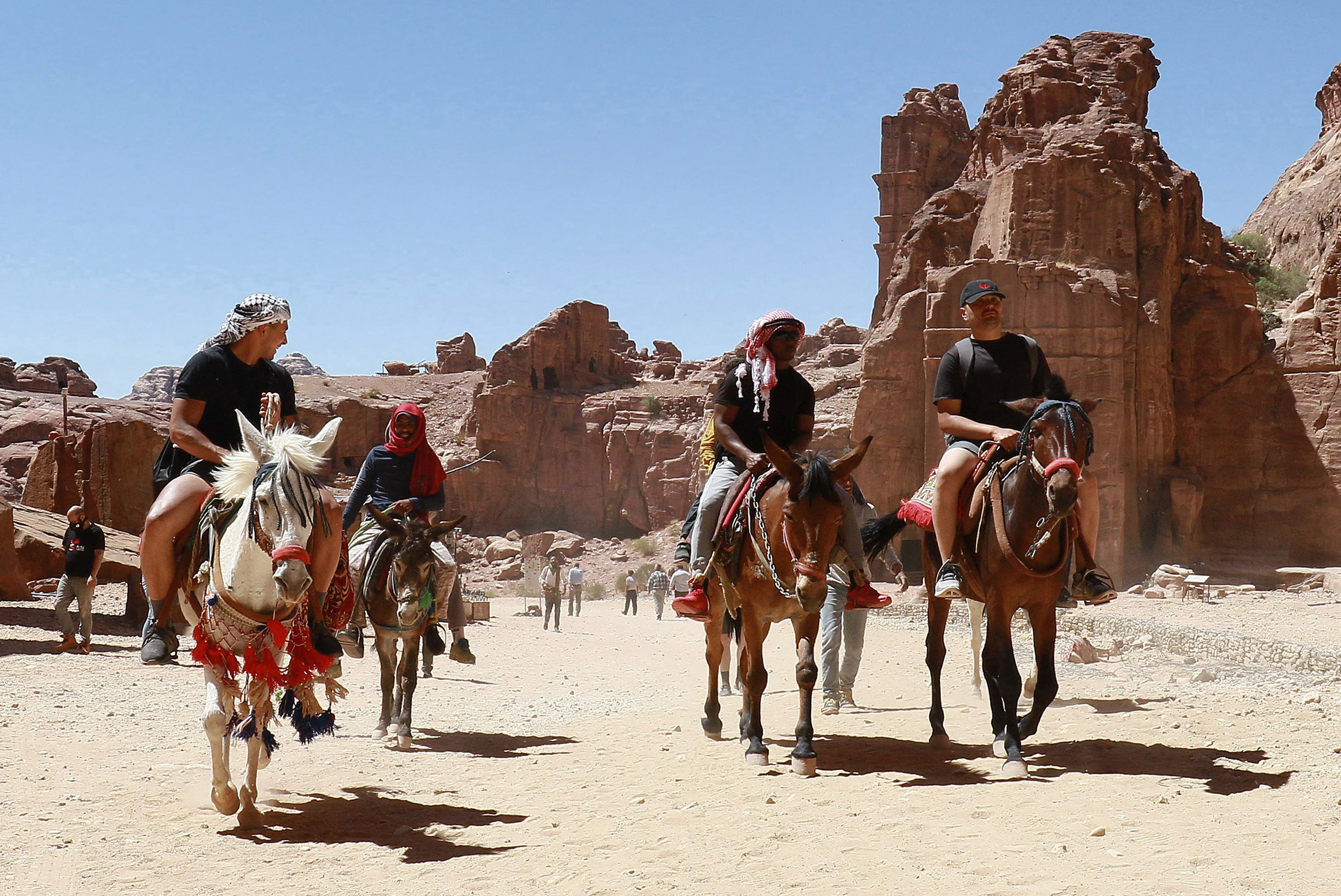 Archaeological Petra: Tour guides have lost their livelihoods, donkeys and mules are starving

Hundreds of Jordanian owners of animal carriers for tourists in the famous Petra lost their main source of income after tourism stopped for more than a year due to the Covid-19 pandemic, and they are now unable to feed dozens of starving donkeys, mules and horses.

Abdul Rahman Ali, 15, is standing in a veterinary clinic near the rock-carved Pink City in southern Jordan, waiting to get free fodder for his donkey, as he can hardly feed them with the cessation of tourism in the ancient city (230 km south of Amman).

"Before Corona, no one was without work, the Bedouins in Petra used to get money and feed their animals," the cheerful brown boy, who wore a blue shirt, olive-colored pants and a blue hat, told AFP. But with Corona, we are forced to come to this clinic to get free feed and treatment.”

The clinic, which was established by the American non-profit organization "PETA" in the village of Umm Sayhoun, near Petra, includes a stable for sleeping horses, donkeys and mules that need care.

In November 2019, Petra celebrated its one million visitor in a year, while the number of visitors to Petra in 2020 decreased to a quarter of a million due to the restrictions imposed to contain the Covid-19 crisis and the repercussions of the epidemic on the economy.

Between 150 and 200 tourists visit the city per day, compared to more than 3,000 in 2019, according to the head of the Petra Regional Authority, Suleiman Al-Farajat.

He adds, "About 80% of the population of Petra (about 35,000) before the pandemic depended directly or indirectly on tourism as a source of fixed income for them, and this income stopped with the cessation of tourism."

There are about 200 tourist guides from the people of Petra, and about four thousand people benefit from transporting tourists by 700 to 800 donkeys, mules, camels and horses.

"It is not only the owners of the animals that have been affected, but also the owners of hotels, restaurants and oriental antiques shops, where hundreds of employees have lost their jobs," Farajat said.

The Corona pandemic hit the Jordanian tourism sector, which was contributing between 12 to 14 percent of the gross domestic product, and tourism income decreased from 5.8 billion dollars in 2019 to one billion in 2020, according to official figures.

At the clinic's large iron door, 23-year-old Muhammad Al-Badol, who was wearing a brown Arab dress, a military jacket and a black cap, also stood with his donkey. He says, “Before Corona, my family and I had seven donkeys and we worked in Petra. Now we only have one donkey that I can hardly feed.”

He points out that his family has seven members, and he and his three brothers work, who are younger than him.

The "Beta" clinic provides care for working animals, especially those that suffer from poor health conditions as a result of malnutrition.

“People here depend on their animals to work in tourism, and with the cessation of tourism, they lost their source of income and no longer have the ability to care and feed them,” said Egyptian horse surgeon Hassan Shata, who runs the clinic, which opened in January 2020.

Shata explains that about 8 months ago, “we started seeing many cases of malnutrition, donkeys and very skinny horses. This prompted us to launch a feeding program to support donkeys, horses, camels and mules.”

The clinic, which is currently the only operating and free of charge, receives between 10 to 15 cases per day, according to Shata.

He points out that the program "saved about 250 animals during the period of suspension of tourism, because people do not have the financial ability to feed or treat their animals."

While examining a wound on the leg of a gray mare called "Salwa", Shata tells that the program was able to follow up on cases that were suffering as a result of starvation and were brought to the clinic and given food, water and the necessary treatment, and she recovered.

In addition to malnutrition, the clinic treats saddle injuries, falls or abuse.

Al-Farajat confirms that there is a project to replace the living quarters with electric cars.

He talks about a project to "operate 20 electric cars by July 1 in Petra, to benefit the owners of the dead."

Some of them will be hired to drive those cars.

It will also deduct from the value of the tourist entry ticket of 50 dinars (70 dollars) eight dinars (11 dollars) for the dead.

In 2019, the value of entry tickets to Petra exceeded 50 million dinars (70 million dollars).