Feature: "When you win, please don't forget us!"

China News Service, Hangzhou, June 5th. Title: Feature: "When you win, please don't forget us!"   Author Guo Qiyu Tong Xiaoyu   On June 5, at the release site of the new book "Moment: Return to the Red Scene of Zhejiang" held in Hangzhou, Zhejiang Province, Qiu Shi, a teacher from the Party School of the Fenghua District Committee of Ningbo City, waited for the four to take a group photo in fr 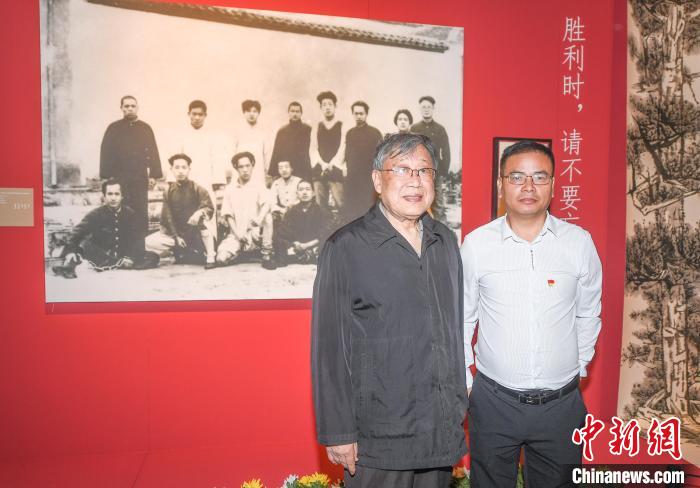 On June 5, at the release site of the new book "Moment: Return to the Red Scene of Zhejiang" held in Hangzhou, Zhejiang Province, Qiu Shi, a teacher from the Party School of the Fenghua District Committee of Ningbo City, waited for the four to take a group photo in front of a painting.

These four people came from all over Zhejiang. They had never known each other before, but their predecessors were all friends in the Zhejiang Army Prison.

The paintings behind them are the predecessors who died in the revolutionary era.

Group photo of descendants of martyrs.

Qiu is the younger uncle, a martyr Qiu Guhuai who served as the deputy secretary of the Zhejiang Provincial Committee of the Communist Youth League in 1928.

Qiu Guhuai graduated from Huangpu Military Academy and participated in the Nanchang Uprising. He died in Zhejiang Army Prison in 1930 at the age of 25.

"When you win, please don't forget us!" Before the sacrifice, he left such touching last words.

Since the day of imprisonment, Qiu Guhuai put his own life and death out of consideration.

He secretly established a special branch of the Chinese Communist Party in prison, served as a propaganda committee member, and organized inmates to fight for many times.

Before his execution, he fell on the ground and wrote a suicide note, calmly going to death.

The new book "Moment: Return to the Red Scene in Zhejiang" was released.

Qiu Guhuai wrote: "I am satisfied that I died for the truth, but unfortunately I have done too little work in the past, and it is too late to make up for it." "Seeing that every comrade did not have any fear when he was justified." "I was victorious." Time, please don’t forget us"...

"I remember the first time I read this letter, my eyes were wet with tears." More than ninety years later, Qiu wrote a letter to his uncle Qiu Guhuai that could never be delivered.

In the letter, he summarized Qiu Guhuai's life as follows: "In the past, I was ignorant of the countryman, but he was in the school when he heard the truth. The brave heroes made steel, but his lofty aspirations were not rewarded."

The new book "Moment: Return to the Red Scene in Zhejiang" was released.

But for many years, Qiu Shi has always had a question in his heart: How did the suicide note of the martyr Qiu Guhuai spread from prison?

After multiple verifications, Qiu found clues in the book "Prison" published by the writer Wan Zheng in 1953. The book described the martyrs' struggle in prison and the details of the suicide note.

In the end, after Chen Wei, a friend detained in the Army Prison, was released from prison, he brought this suicide note to the party organization so that it can be passed down to the present day and will last forever.

Qiu told reporters that in addition to his suicide note to the party, Qiu Guhuai also had a suicide note handed over to his elder brother by his inmates: "In the letter, my uncle asked the family not to tell his mother about his sacrifice, so as not to make her feel sad."

Since Qiu Guhuai left home for the last time in 1928, his mother has not waited for the youngest son for more than 20 years.

It was not until the local people's government sent a plaque to Qiu's family in 1949 that Qiu's mother knew that her favorite young son would never return.

In less than a month, Qiu Guhuai's 80-year-old mother died in depression.

Outside of work, Qiu has been collecting and sorting out documents related to Qiu Guhuai. “Perhaps these things should have been done by his uncle’s descendants, but unfortunately, he didn’t even leave a single child behind.”

Martyr Xu Ying, the fifth secretary of the Zhejiang Provincial Party Committee, led the struggle with Qiu Guhuai and others in prison.

After more than ninety years, the descendants of the martyrs met again, which is meaningful.

Xu Yanfang is now a full-time commentator at the Xu Ying Martyrs Memorial Hall. She tells her grandfather's deeds and spirit several times a day.

"Although my grandfather's short and heroic life is only 24 years, my father was only over a year old when he died, but his spirit is the everlasting treasure of our family." Xu Ying hopes to tell such stories and spirits to millions. Ten thousand people will continue to talk about it from generation to generation.

Among the martyrs who came to the scene that day, Zhang Qiuren, the former secretary of the Zhejiang Provincial Party Committee, also had no children.

His grand-nephew Zhang Lijiang told reporters that Zhang Qiuren was ordered to serve as the secretary of the Zhejiang Provincial Party Committee during the "white terror" period, and was arrested and imprisoned only 4 days later. He died in Hangzhou in 1928 at the age of 30.

The secretary of the Zhejiang Provincial Party Committee who had only been for a day was recognized by the West Lake, jumped into the West Lake, dived into the bottom of the lake and buried important documents with him in the mud, but unfortunately he was arrested.

"Before he came to Zhejiang to take office, Zhang Qiuren said that he is likely to die here because there are too many people in Zhejiang who know him. But even so, he still has no hesitation." Zhang Lijiang believes that Zhang Qiu's life is "head-to-head". revolutionary.

On the same day, Zhuo Wute, the martyr's grandson of Zhuo Lanfang, the former secretary of the Zhejiang Provincial Party Committee, brought his daughter to the event.

He said: "My grandfather was 30 when he died, and my daughter is also 30 this year. This is a meaningful dialogue that travels through time and space."

In those days, the martyrs shouted "Please don't forget us when you win" before the sacrifice.

Now, after traveling through a century of time and space, people later gave the answer: "How can we forget."