Directly hit the scene of the collision of a train on the Lanzhou-Xinjiang line: the crowded corners talk at close range and the wind is lost

China News Service, Jinchang, Gansu, June 5 (Reporter Feng Zhijun, Yang Yanmin, Ai Qinglong) A train crash on the Lanxin Railway in Yongchang County, Jinchang City, Gansu Province on the 4th killed 9 people. The accident was located in the Gobi, where the railroad tracks are densely curved, and the satellite image shows a "W"-shaped line from the bird's-eye view. The wind is extremely strong, an 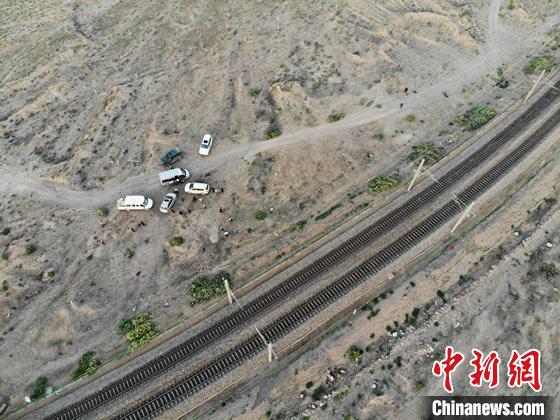 The accident was located in the Gobi, where the railroad tracks are densely curved, and the satellite image shows a "W"-shaped line from the bird's-eye view. The wind is extremely strong, and people can barely hear people talking at close range.

On the evening of the 4th, an investigation team consisting of ten vehicles and more than 20 people was still on the scene to investigate the cause of the accident. There were still scattered keys, gloves and other items around the railroad tracks.

Due to the frequent passing of trains, several railway security officers in work uniforms used professional communication equipment to persuade on-site investigators to leave from time to time to ensure safety.

The picture shows the scene of the accident where a train collided with a train on the Lanzhou-Xinjiang Railway.

The Jinchang section of the Lanxin Railway in Gansu has the famous Jinchang Zhan line group. The trains on this section (mainly concentrated in the section between Jinchang Station and Yushi Station) need to turn many times before going up and downhill.

In order to lower the slope, during the electrification of the Lan-Xin line, this section of the road was transformed into a "W"-shaped extension line. Due to the special terrain and line design, you can even see "multiple trains chasing in circles" and "The front can see the rear of the car" and so on.

"This is due to the steep slope of this section of the road, and the power equipment at that time may not be able to pull the train to operate normally." A railway staff member at the scene told a reporter from China News Agency that the section of railway in the deserted Gobi could have been It was built in a straight line, but due to the technical conditions at the time, the slope problem faced in operation could only be solved through multiple bends.

The picture shows the scene of the accident where a train collided with a train on the Lanzhou-Xinjiang Railway.

The accident site is surrounded by a flat Gobi Desert, and the unobstructed wind will have an unimaginable impact. When the reporter used the drone for aerial photography, the roaring wind made the drone equipment out of control and forced to land one kilometer away. local.

While speaking normally at a distance of one or two meters away from the counterparts, the other party can hardly hear them, and even if they yell out of their throats, they can't catch them all.

Lanzhou Railway Bureau stated that on the 4th, in accordance with the “Skylight Construction Plan” of the Lanxin Line, the staff of the Bureau closed down the Lanzhou-Xinjiang Line to carry out maintenance operations on large machines. The skylight was scheduled to be from 4:6 to 7:6.

At 5:18, construction workers collided with a passing train on the up line.

The picture shows the investigation team at the scene of the accident on the evening of June 4.

"There are more than 120 trains passing through the Lanxin Railway every day, and the increase in the number of vehicles has continued to increase the wear of the rails. The damaged rails must be replaced in time." According to a recent report by local government media in Gansu.

The reporter saw at the scene that the distance between the up and down lines of the accident was about 2 meters.

"According to the regulations, we will be equipped with sufficient safety protection personnel at the inspection and repair construction site." A railway department staff member who participated in the investigation at the accident site said that what happened at that time needed to be collected from multiple parties to investigate and collect evidence.

It is understood that dozens of workers currently participating in the on-site construction are being questioned and investigated by the police.

The railway department has started to appease the families of the victims and deal with the aftermath.