'Miwoo Bird' Jang Yoon-jung, Do Kyung-wan's third free attempt "OK as long as you come under me"

At the time when Do Kyung-wan made a free declaration, Jang Yoon-jung's reaction was revealed. In SBS 'My Little Old Boy' broadcast on the 30th, broadcaster Do Kyung-wan appeared as a special MC. 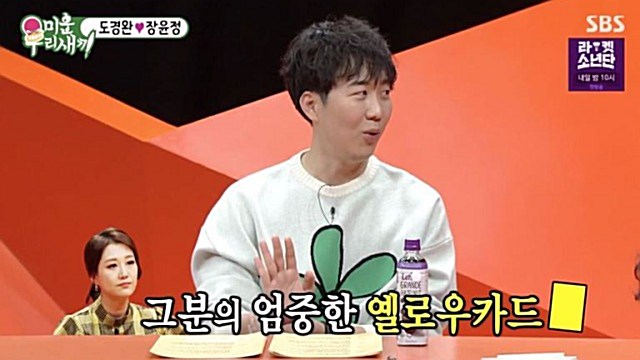 In SBS 'My Little Old Boy' (hereinafter referred to as 'Miu Bird') broadcast on the 30th, broadcaster Do Kyung-wan appeared as a special MC.

Then, Do Kyung-wan said, "I think we talked about it three times." "The first time was when we were informed. At that time, he said that he would do a freebie, so he didn't answer. “It felt like this,” he explained.

Then, Do Kyung-wan added, "It was the most severe yellow card he could give," and Kim Jong-kook's mother sympathized, saying, "Don't say anything that doesn't sound like a word."

And Do Kyung-wan asked his wife if she could do the free again after appearing on variety shows with the children, and Jang Yoon-jung said, "Are you ready?" To this, Do Kyung-wan explained, "I saw myself unable to answer that I was ready, and I thought I wasn't ready, so I didn't continue the conversation."