The Kings have presided this morning the central act of the Armed Forces Day 2021, which on this occasion was held in the Plaza de Lealtad in Madrid. A very event 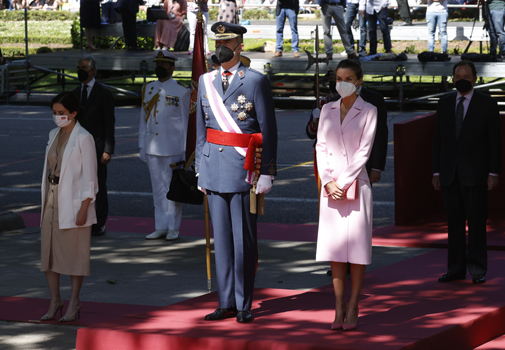 The Kings have presided this morning the central act

, which on this occasion was held in the Plaza de Lealtad in

. A very emotional event in which, due to the pandemic, a small group from the

Army, the Navy, the Air Force and the Civil Guard participated

to pay tribute to those who have given their lives for Spain and to make the work that the military carry out inside and outside our borders. And in which

has once again given her particular lesson in style.

For the military event, which was also attended by the Minister of Defense,

, the host of the event;

the president of the Community of Madrid,

, and the mayor of Madrid,

has worn an elegant light powder pink coat as a dress.

Doña Letizia, very pretty with her hair gathered in a simple ballerina-type bun without bangs, has combined the little coat, a

and purse also in pink, although both in a shade more intense that veered towards fuchsia.

A formal and elegant design that thanks to the color, one of the most in trend tones of this season, has compensated for the perhaps too winter cut for this time of year.

As jewels, Queen Letizia has chosen long earrings with a double ruby ​​and emerald stone, which stood out a lot thanks to the simple collection and a very natural makeup in nude tones.

In Seville, in red

due to the pandemic,

Queen Letizia in a dress by the Seville firm Cherubina, on Armed Forces Day 2019.

, the Suzie model, costing 280 euros, was a short sleeve design and knee, complete with accessories also in red: portfolio

Trends: Maximum from Holland, black is worn with pearls

TrendsThe two for one of Queen Letizia: support tourism and 'made in Spain' in a single act