Yunnan releases the intensity map of the Yangbi M6.4 earthquake to provide a basis for the restoration and reconstruction plan of the disaster area

China News Service, Kunming, May 25 (Han Shuinan) At the fifth press conference of the Press Center of the “5.21” Yangbi 6.4 Earthquake Relief Headquarters in Dali Prefecture, Yunnan Province, held on the 25th, the Yunnan Seismological Bureau officially presented to the society Released the Map of Earthquake Intensity with Ms 6.4 in Yangbi, Yunnan.   Zhang Jianguo, researcher of the chief engin 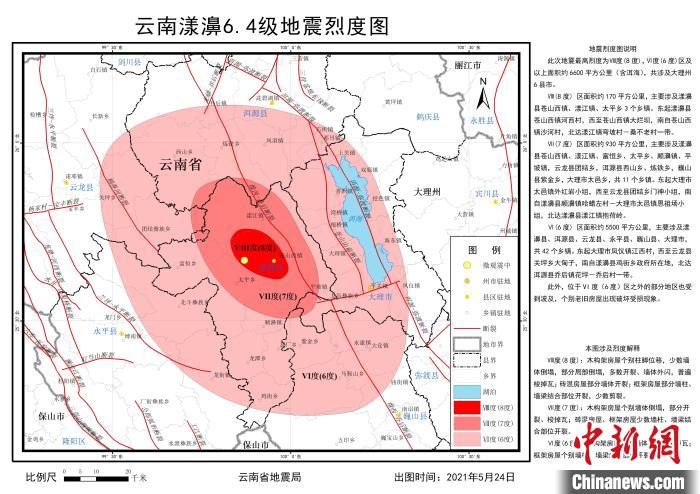 China News Service, Kunming, May 25 (Han Shuinan) At the fifth press conference of the Press Center of the “5.21” Yangbi 6.4 Earthquake Relief Headquarters in Dali Prefecture, Yunnan Province, held on the 25th, the Yunnan Seismological Bureau officially presented to the society Released the Map of Earthquake Intensity with Ms 6.4 in Yangbi, Yunnan.

The so-called earthquake intensity refers to the degree of damage to the ground, buildings and other structures, including damage to buildings and changes in natural landscapes.

The intensity of China is divided into 12 levels, the higher the level, the heavier the damage.

Among them, buildings with an intensity of 6 degrees and above will have varying degrees of damage.

The seismic intensity map reflects the range and degree of ground impact caused by an earthquake.

According to Zhang Jianguo, the Seismological Bureau of Yunnan Province conducted field surveys on 218 survey points in 53 towns and villages in 6 cities and counties in Dali Prefecture, and made reference to the scientific and technological support achievements such as fault structures in the earthquake area, distribution of aftershocks, focal mechanisms, and instrument intensity distribution maps. The strong motion observation records confirmed the intensity distribution of the earthquake.

The picture shows the "Intensity Map of the M6.4 Earthquake in Yangbi, Yunnan".

The highest intensity of the earthquake is Ⅷ degree (8 degree), and the area of ​​Ⅵ degree (6 degree) and above is about 6,600 square kilometers (including Erhai Lake). The long axis of isoseismal is north-northwest trending, the long axis is 106 kilometers, and the short axis 76 kilometers, involving 6 counties and cities in Dali prefecture.

It starts from Jiangxi Village, Fengyi Town, Dali City in the east, to Dadianzi, Guanping Township, Yunlong County in the west, from the seat of Jijie Township Government in Yangbi County in the south, and reaches Huaping-Qiaohou Village in Qiaohou Township in the north.

In addition, some areas outside the VI degree (6 degree) area were also affected, and some old houses were damaged.

Zhang Jianguo explained at the press conference the intensity involved in the intensity map of the magnitude 6.4 earthquake in Yangbi, Yunnan.

Degree VII (degree 7): The individual walls of the timber-framed houses collapsed, partially cracked, and the tiles were dropped; the joints of a few wall columns and wall beams in brick-concrete houses and frame houses cracked.

According to previously released information, as of 11:00 on May 22, 14,122 houses in Yangbi County were damaged, of which 232 were collapsed. Most of the collapses were distributed within a radius of 5 kilometers from the epicenter of the earthquake. Residential dilapidated houses), 13930 rooms were moderately and slightly damaged (all houses in 9 villages and towns in the county were involved).