Conjunction of Mars with the Moon this weekend

At the beginning of the nights of this weekend we can see a conjunction of Mars with the edge of the crescent moon. It is also possible to see Venus and Mercury at twilight ... 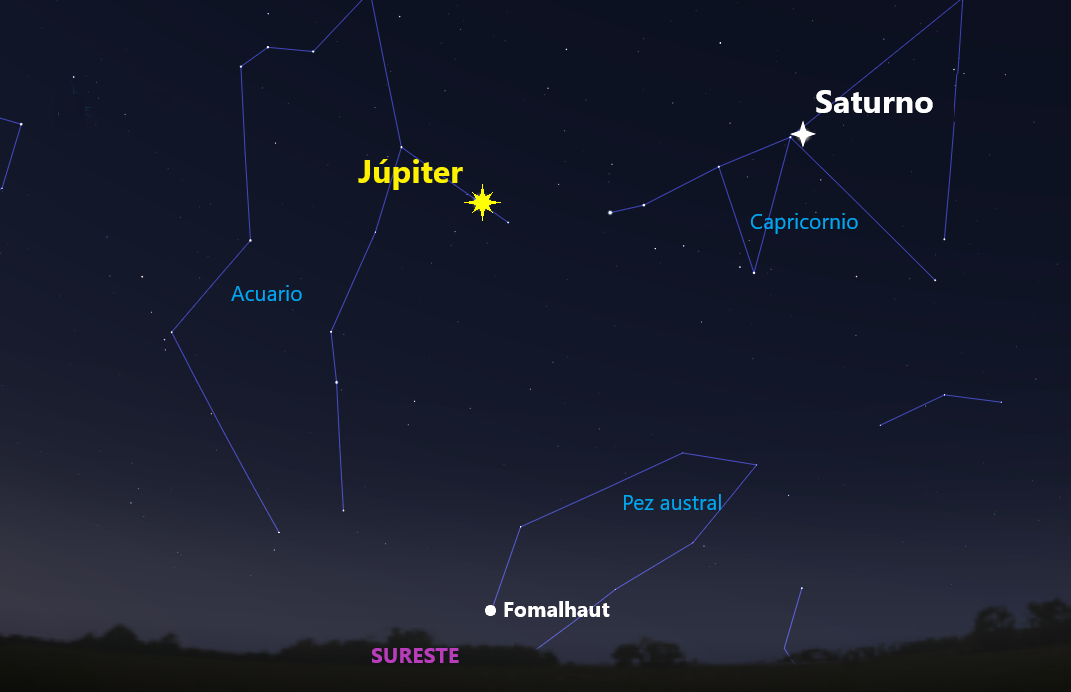 At the beginning of the nights of this weekend we can see a conjunction of Mars with the edge of the crescent moon.

It is also possible to see Venus and Mercury in the evening twilight.

And to Jupiter and Saturn during the second half of the night.

This is a very conducive weekend to observe the planets with the naked eye. In addition, if time permits, we can enjoy a beautiful conjunction of Mars with the Moon. Our satellite passed through the new moon last Tuesday the 11th, so this weekend, the crescent is still showing a fine and brilliant edge. It is a good time to appreciate the delicate glow of the ashen light. This slight glow from the dark part of the lunar disk is caused by the reflection of light that comes from the Sun, after reflecting off the Earth. It is thus the reflection of a reflection.

At around 11pm, that is, an hour and a half after sunset, the sky will already be very dark in the west.

On the horizon we can see the reddish glow of Mars.

On Saturday 15, the lunar edge will be a little lower than the planet.

On the night of Sunday 16, the Moon will be higher and further west.

The scene takes place in Gemini.

Mars is like a ruby ​​that contrasts with the twinkling brilliance of the beautiful Castor and Pollux.

The conjunction of Mars with the Moon will descend in elevation as the minutes pass, so it is advisable not to delay to observe it.

The Moon will go to bed at 1 a.m. (peninsular time) from Saturday to Sunday, and at 2 a.m. from Sunday to Monday.

Mars is now about 300 million kilometers from us.

This distance is twice the distance between the Sun and the Earth.

As we direct our gaze towards its distant reddish glow, we cannot help but consider that several remote-controlled off-road vehicles from Earth are passing by on its red surface, among them the Perseverance that was recently sent by NASA together with the Ingenuity helicopter that works very satisfactorily. .

Those who are lucky enough to be in a very dark place and with a clear horizon to the west, will also be able to take advantage of this weekend to see the two inner planets, that is, those whose orbits are closer to the Sun than the orbit. from the earth.

Because of this, the apparent positions of Mercury and Venus are always relatively close to the line of gaze to the Sun, and are only visible for short periods of time at twilight (verpertin or morning).

After a period without being seen, since its position was too close to that of the Sun, Venus is slowly returning to the evening skies.

This weekend we can see it go to bed, in the west, shortly after the Sun.

In addition, these days are ideal to observe the little Mercury.

The apparent position of the elusive planet has been gradually separating from that of the Sun during the last days and will achieve an extreme position (called 'maximum east elongation') on Monday the 17th. You have to be very vigilant after sunset and wait for lie down Venus so that the discreet glow of Mercury stands out against the reddish glows of twilight.

Early risers, and night owls who stay up until dawn, can take advantage of these days to observe the giant planets Jupiter and Saturn, which serve as morning stars throughout the month of May.

Jupiter appears considerably brighter than the giant with the rings.

This should not surprise us since Saturn is now about 1,500 million kilometers from Earth, a distance that is twice the distance that separates us from Jupiter.

Jupiter and Saturn, at 6 o'clock in the southeastStellarium / RB

As the night progresses, they both gain height and remain visible until dawn.

They will shine splendidly at about 6 am in the southeast, before dawn clears the sky.

At that very moment, low above the horizon, the very bright Fomalhaut, the main star of the small constellation Pez Austral, will appear.

Its name, which is derived from Arabic, means 'fish mouth'.

The sky changes as spring progresses.

The beautiful winter constellations, such as Orion and Taurus, are giving way to those other magnificent constellations that mark our northern summers, such as the Swan, the Lyre and the Eagle.

Little by little the most beautiful part of the Milky Way is also visible, which is visible from our latitudes and which will reach its maximum splendor in midsummer.

Do not miss these celestial shows that always invite us to dream and reflect on our role in the universe.

Rafael Bachiller is director of

(National Geographic Institute) and academic of the

Q&A A Chinese rocket will fall uncontrollably this weekend, what is the risk of it hitting an inhabited area?