Even if you rely on a magnifying glass, you must insist on creating for three hours a day   Entering May, the weather is getting hotter, 107-year-old Ma Shitu lives in the study every day and writes at the desk. The creation of the novel "The Man with the Best Way" has entered the final stage and will be published this year. This is his big wish. .   When Ma Shitu shared the good news with us 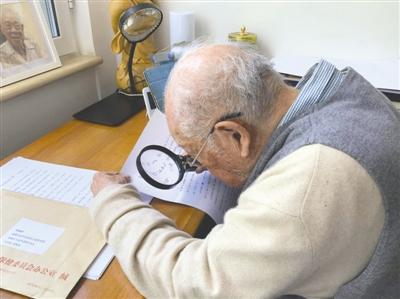 Even if you rely on a magnifying glass, you must insist on creating for three hours a day

Entering May, the weather is getting hotter, 107-year-old Ma Shitu lives in the study every day and writes at the desk. The creation of the novel "The Man with the Best Way" has entered the final stage and will be published this year. This is his big wish. .

When Ma Shitu shared the good news with us excitedly, his face was full of smiles, even every wrinkle was shining, red plum blossoms in front of the window behind him, and a picture of blessing personally on the window, beaming with joy, What could be more exciting than this.

Young people, when faced with an old man over a hundred years old, who is scrambling to learn and create every day, what reason do you have to waste your time and give up your efforts?

"If there is a chance to go back to the past, which year do you want to go back?" Ma Shitu answered without hesitation and solemnly: "I think the happiest time in my life is at Southwest Associated University. The day I enrolled, was When I am happiest."

Participating in the documentary "Post-Nine Zeros"

In theaters this month

On May 4, 1919, a patriotic movement with young students as the main body began.

At this time, Ma Shitu was only 4 years old, reading ancient books and idioms in a private school, and was deeply immersed in traditional culture.

In 1931, after graduating from junior high school at the age of 16, Ma Shitu left his hometown to study in Peking. That year, the sound of the "September 18" artillery shattered his "dream of a strong country", and since then he joined the student movement for anti-Japanese and national salvation. .

In 1941, the 26-year-old Ma Shitu was admitted to the Department of Foreign Languages ​​and Literature of Southwest Associated University under the name of "Ma Qianhe", and then transferred to the Department of Chinese Literature. He was taught by Wen Yiduo, Zhu Ziqing, Chen Mengjia, Tang Lan and other famous artists, and received literary creation. , Subject training of text exegesis.

On May 29th, a documentary "Post-Nine Zeros" will be released. In the starring list, the name of Ma Shitu appears, along with Yang Zhenning, Xu Yuanchong, Pan Jiluan, Yang Li, Wang Xiji...16 average ages Union University students over 96 years old, they want to "star in" together and return to the era of wars and shining stars.

For these "post-ninety" old people who are over ninety years old, the Southwest United University is not a dusty history, but a youthful memory that is still fresh as before.

At the Southwest United University, Ma Shitu studied while participating in underground party work and served as the party branch secretary of the United Nations General Assembly. In the documentary, Ma Shitu also reviewed the story of "doing a bomb against Japan."

Plan to publish this year

The best nostalgia for the teacher is to pass on the knowledge and wisdom taught by the teacher.

After retiring, in the leisure time of literary creation, I began to write "Recollection of Oracle Bone Inscriptions", especially after Ma Shitu's book "The Story of the Night" was completed in 2017, he devoted himself to ancient characters including Oracle and Bronze inscriptions. During the study, the new book is titled "Ma Shitu Southwestern Associated University Oracle Notes", which is currently being edited and produced by Sichuan People's Publishing House.

This book is Maro's first Oracle research work, and it is expected to be available within this year.

The book recalls the language and philology taught by Mr. Luo Changpei, Tang Lan, Chen Mengjia, Wang Li, Zhu Dexi, etc. when he was studying in ancient philology at Southwest Associated University. It also recalls the essence of Tang Lan’s research on oracle bone inscriptions, and records at the same time. He did some of the Oracle research back then and his current training notes on Oracle.

I want to travel back to student time

During the interview, a reporter from Chengdu Commercial Daily asked Ma Lao: "If there is a chance to travel back to the past, which year do you want to return?" Ma Lao answered without hesitation: "I think I have the happiest time in my life. It was at Southwest Associated University. The day I enrolled was my happiest time."

During the interview, it coincided with a Peking University alumnus visiting Ma Shitu.

"I'm 107 years old this year. During the entire four years of Southwest United University, I studied the Chinese Department, majoring in language and writing. There, I developed a habit of studying, studying, and studying again." Ma Shitu At that time, although the conditions were poor, the professors were very good. The teachers and students never gave up their efforts. The outstanding students at that time gradually became some important figures in the Chinese construction team.

The habit of relearning

"Although I am very old, in poor health, and near-blind, I still stick to the habit that I developed at Peking University. I study, study and study again. My eyes cannot see clearly. I also want to read with a magnifying glass." He raised the magnifying glass beside him to indicate.

Ma Shitu talked for half an hour with a clear mind. He also hoped that young students would develop the habit of innovation and learning throughout their lives, and study and study again.

"I believe that as long as we can maintain this spirit and study hard, we will definitely be able to make a great contribution to our country in the future. Therefore, although I am old, I have high hopes for young students."

At the age of 107, Ma Lao lived a fulfilling and hard life and lived up to his time.

When the reporter asked him what his aspirations for life at the age of 107, he thought about it for a moment and replied: "I am still working hard to study and create, so I have done a lot of literary creations in the past two years, and I have also produced several This book, the "Night Story Continued" that was released, I heard that it was also selected as a good book in China."

Ma Shitu’s first wish is to publish the book on Oracle research that has been completed this year. "I once read the language and writing major. I saw on the news that Oracle’s 120th Anniversary Symposium was held in Beijing. I was very excited. In the past, the study of Oracle bone inscriptions, explanation of characters, and inscriptions in bronze inscriptions at Southwest United University has been restored. Therefore, two Oracle notebooks have been completed this year, one is called "Ma Shitu Southwestern Union University Oracle Notes", and the other is my comment. Oracle re-read the notes written. I will publish a novel and two Oracle notebooks this year. They all say that a 107-year-old can publish three books in one year. How did this come about? This is how I am in Southwest United Greatly cultivated learning, exploring and creative spirit."

More than 40 years ago, Ma Shitu planned to write a novel, but was not finished because of his busy work.

Recently, old friends from the past came to visit him, hoping that he would finish this unfinished novel.

Therefore, in addition to reading books every day, he continues to finish his new novel "The Man with the Best Way".

But he was too busy at the time, and only published an article "The Man with the Best Way" and there was no further article.

After the reform and opening up, Ma Shitu met Chen Baichen again.

One day later, Ma Shitu suddenly found the manuscript, which contained seven to eighty thousand words. "All conditions forced me to finish this book before I left."

"Now, I am very hardworking on the one hand, and nervous on the other, afraid that I will leave the world before I finish writing this novel, so I have to spend three hours a day engaged in specialized creation until now."

Ma Shitu turned around and took out a red-covered notebook on the desk: "I have not only completed the modification of the past seven or eighty thousand words, but also added about one hundred thousand new words." Now the writing has come to an end. Ma Shitu hopes to be published this year.

"I am very happy to see this book published before I leave."

Ma Shitu still has many expectations for the future, "This year, if I am in good health, I also want to participate in the Tenth National Congress of the Chinese Writers Association in Beijing. If I can go to Beijing this year, I will definitely return to Peking University. At first glance, I was worthless of this life."

In June 2021, Ma Lao will also hold a personal calligraphy exhibition in Chongqing to celebrate the 100th anniversary of the founding of the party, "If my body allows, I also want to go to the scene."

The interview with Ma Lao coincided with the "May Fourth" Youth Day. Ma Lao sent a message to the young people through the Chengdu Business Daily: "Learning, exploring, progressing, and creating, this is my little expectation of our youth." He told the young people, people Really study, real study, real thinking, real creation.

"I hope everyone will work hard together. In my lifetime, I hope to see young people make more and better contributions."