Directly hit the scene of the Wuhan tornado disaster: big tree cuts off the roof of the factory building

Chinanews.com, Wuhan, May 15th, title: Go straight to the scene of the tornado disaster in Wuhan: big trees cut off the roof of the factory building and overturned   Reporter Zhang Qin   The Wushan area of ​​Caidian District of Wuhan City and the Junshan area of ​​Wuhan Economic Development Zone were hit by a level 9 tornado on the evening of the 14th. A reporter from China News Network rushed 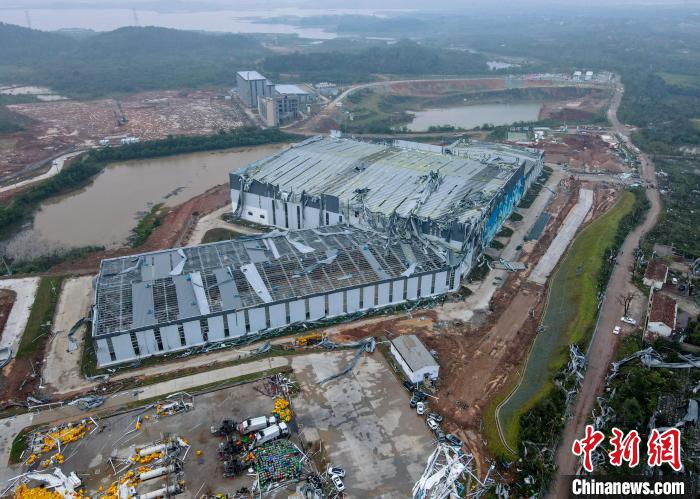 Chinanews.com, Wuhan, May 15th, title: Go straight to the scene of the tornado disaster in Wuhan: big trees cut off the roof of the factory building and overturned

The Wushan area of ​​Caidian District of Wuhan City and the Junshan area of ​​Wuhan Economic Development Zone were hit by a level 9 tornado on the evening of the 14th. A reporter from China News Network rushed to the more severely-hit areas near Qianzishan Avenue and Tutong Road in Caidian District. At the site, the roofs of some construction sites were overturned, the prefabricated dormitories where workers lived were more severely damaged, and rows of trees along the roadside were cut off.

After the tornado passed, a construction site in Caidian District, Wuhan City was seriously damaged.

The Wuhan Meteorological Bureau reported in the early morning of the 15th that affected by the high-altitude low trough and low-level warm shear, moderate to heavy rain and partial heavy rain occurred in most of Wuhan from 8-22 on May 14th, accompanied by thunderstorms, gales, and hail. , Short-term heavy precipitation, etc., strong convective weather mainly occurred at 20-22 o'clock on the 14th, and at 20:39, there was a strong wind (level 9) of 23.9m/s at the Xingshan Observatory in Caidian District.

According to local official statistics, as of 4:30 on the 15th, 6 people were killed and 218 injured; 27 houses were collapsed, 85 houses were destroyed, 400 houses were 130 houses, 2 tower cranes, and 8000 square meters temporary work sheds were damaged.

At 3 o'clock in the morning on the 15th, the reporter came to the Wuhan Qianzishan Circular Economy Industrial Park area along the Tutong Highway in Caidian District.

There were blown down sheds and scattered doors and windows everywhere at the scene. Many sturdy trees on the side of the road were chopped off or uprooted, and many telephone poles along the line broke.

The roof of the factory building at the construction site on the side of the road was overturned on a large scale, and some of the blown steel plates were twisted around the remaining tree trunks on both sides of the road.

The iron sheet rolled up by the tornado was wrapped around the big tree on the side of the road.

The reporter saw at the scene that there was a power outage in the surrounding area due to damage to the power facilities.

A large number of personnel from the fire, civil affairs, public security, health, transportation, emergency and other departments carried out rescue in an orderly manner under the searchlight.

While large cranes, excavators and other equipment remove road obstacles, some workers use oxygen cutting equipment to clean the squeezed steel structure.

Xiao Guoyang, 64, is a security guard at the construction site.

At the time of the incident, he was alone on duty in a doorman's room built in a mobile board room.

"It rained more and more at 8 o'clock, and suddenly the house was blown down." Recalling the incident, Xiao Guoyang looked frightened.

He told reporters that after the concierge collapsed, it was pitch black. He crawled out from under the steel plate with strong support, and there were also many bruises on his body.

Relying on his familiarity with the terrain, he ran into the factory not far away in the dark, and walked out about half an hour later.

With the help of the dim light of the flashlight, the reporter came to the prefabricated house Xiao Guoyang said. The scene was already in a mess, and the house was not visible at all.

An electric tricycle parked nearby propped up a corner of the board house and became Xiao Guoyang's "escape" channel that night.

The factory building not far away is left with only ruined walls. The originally hard steel plates above the roof are like "rags" pulled on one side. The bodies and windows of dozens of cars parked near the factory are seriously damaged. Several vehicles were overturned under strong winds, and a large tower crane parked on the construction site also twisted and collapsed.

Xiao Guoyang told reporters that opposite the factory building is the workers' residential area, and the original prefabricated houses have disappeared.

After escaping that night, he heard calls for help from the opposite side from time to time.

1. The construction site is seriously damaged.

He said that at 8 o'clock in the evening on the 14th, he and his wife were watching TV at home, but the signal was suddenly interrupted, and then he heard a "hooping" noise outside.

The old couple closed the doors and windows tightly until dawn and went out to check before discovering that the roof tiles of two of their houses had been blown off, and several large trees that had been planted for decades in front of the house had also been cut off.

As of the press time, heavy rain had fallen again at the site of the incident, and the rescue at the scene was still continuing.