“Why is it that Ben Salman - perhaps the most influential and richest man in the Middle East - is laying the red carpet in front of the prime minister of a poor country? Because the Islamic Republic of Pakistan is the sixth largest army in the world and the only Islamic army in the world with nuclear weapons. Pakistan is a key player in the security of the region and the golden key to a peaceful settlement in Afghanistan. " 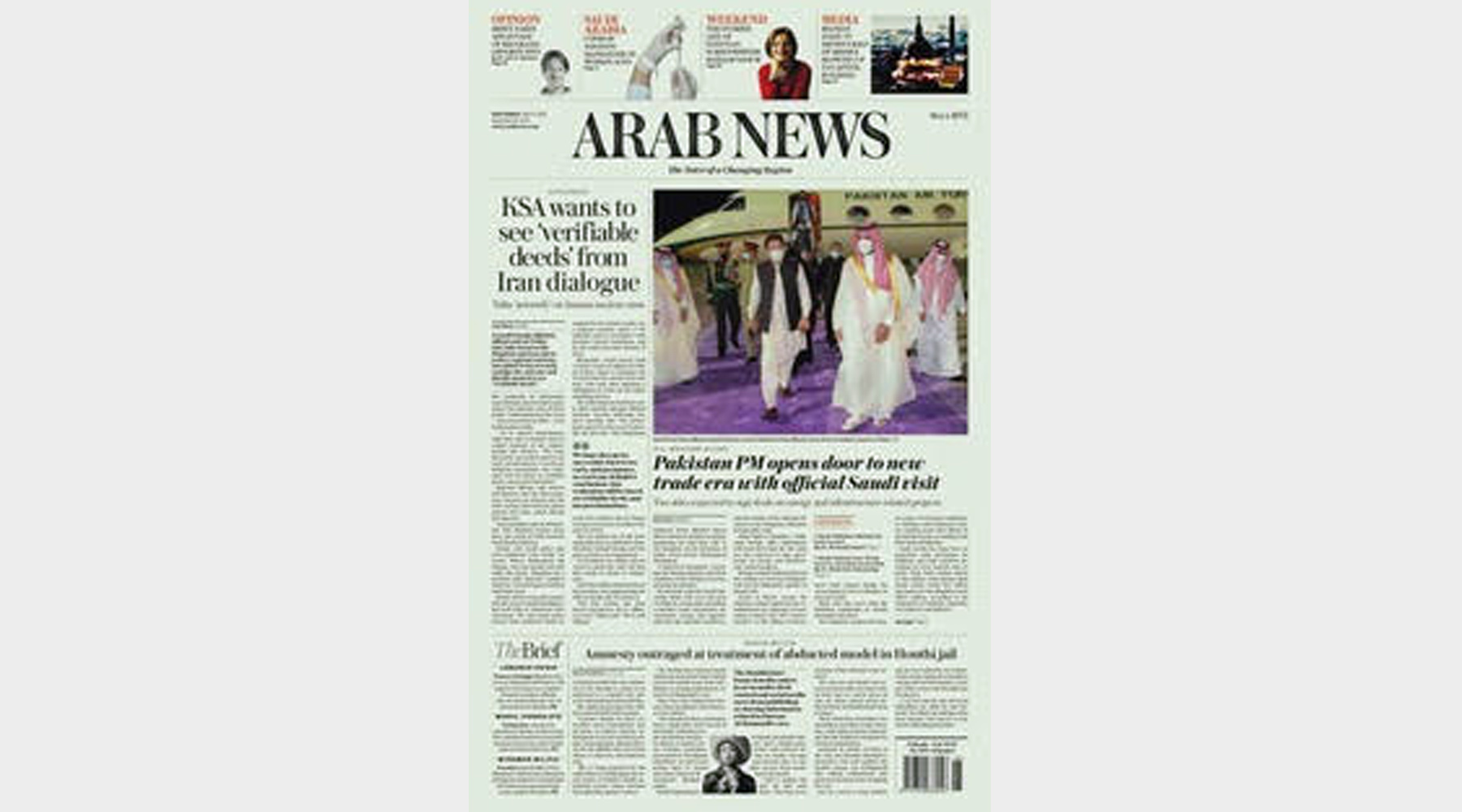 All the media of the Arabian Peninsula went out for three days with special issues and photos of the Pakistani prime minister on the covers, covering his visit as if it were an event of exceptional historical importance.

Why is it that Ben Salman - perhaps the most influential and richest man in the Middle East - is laying the red carpet in front of the prime minister of a poor country that ranks 105th out of 149 countries in the world according to the happiness index (that is, in fact, included in the anti-rating of unhappy countries ).

Pakistan is a key player in the security of the region and the golden key to a peaceful settlement in Afghanistan.

Secondly, because Pakistani Prime Minister Imran Khan, after a year of cold war with Saudi Arabia and geopolitical voyage to the Turkish-Iranian alliance (under the big Chinese flag), returned Pakistan to the American-Arab bloc.

Right these days, these minutes.

Do we have anything from this?

First, the Russian Foreign Ministry has recently begun to intensify its rapprochement with Pakistan and building up bilateral relations.

Second, as mentioned above, Pakistan, the birthplace of the Taliban *, is the key to a settlement in Afghanistan, which is part of the Russian zone of influence and interests.

The Russian Federation is one of the participants in the "peace" negotiation process in Afghanistan, and we stepped up our actions in the region against the background of the withdrawal of American troops from there (remembering that a holy place is never empty).

On March 18, 2021, an interesting coalition for an Afghan settlement - Russia, the United States, China and Pakistan - was even assembled in Moscow, with the participation of Turkey and Qatar as guests of honor.

The very same "Afghan" conference in Moscow in March gave reason to assume that Russia has taken a foreign policy course towards a non-Arab Muslim bloc - Pakistan, Iran, Turkey.

As if in confirmation of the new alliance, on March 23, 2021, the birthday of the Islamic republic (Pakistan became the world's first Islamic republic in 1956), the Turkish Air Force arrived in Islamabad to write pirouettes in the sky in honor of the holiday, relations between Islamabad and Tehran intensified. and in April, Russian Foreign Minister Sergei Lavrov went on a tour to Pakistan (and further to Iran).

“Expansion of trade, bilateral relations and the North-South gas pipeline project are the first on the agenda of Sergei Lavrov, who arrived in Islamabad on April 6, 2021, Pakistani media reported.

The North-South gas pipeline, aka Pakistani Stream, is a 1.1 thousand km pipe with a throughput capacity of 12.4 billion cubic meters.

m per year, which will have to connect the South Pakistani city of Karachi, where terminals for receiving liquefied gas are located, with Lahore in the north of the country.

The interests of Russia in this project are represented by the Rostec corporation.

Even the dates for the start of the construction of the gas pipeline were announced - July 2021.

So, most of the Russian-Pakistani agreements may be called into question if the June meeting of Biden and Putin does not resolve the painful problems of Russian-American relations.

Because after the historic and conciliatory visit of Prime Minister Imran Khan to Saudi Arabia, Pakistan's foreign policy is likely to change.

What preceded the warming between Pakistan and Russia?

The separation of Islamabad from the strategic partnership with the United States and the monarchies of the Persian Gulf, primarily the UAE and Saudi Arabia, and rapprochement with China and the Islamic non-Arab alliance.

The painful break and the cold war with Saudi Arabia and the UAE emerged more than a year ago because of Kashmir: under the influence of China, Pakistan, tied to Beijing by financial obligations, began to "swing" the topic of Kashmir and asked for the support of Saudi Arabia to mobilize the Islamic world against Delhi ...

The OIC is a group of 57 Muslim countries ruled by Saudi Arabia.

But Islamabad did not back down, demanding that the OIC be used to put pressure on India over the Kashmir issue.

Historical background: Kashmir is a contested territory with a predominantly Muslim population, the rights to which India and Pakistan have disputed since they gained independence from Great Britain in 1947.

In 1963, Pakistan transferred to China the Kashmir territory of Aksaychin with an area of ​​37.5 thousand square meters.

km and claims the entire territory of Kashmir.

In 2020, the region again experienced a military exacerbation.

If they fail to do this, I will have to ask our Prime Minister to convene a meeting of Islamic countries - Iran, Turkey and Malaysia, which are ready to support us in the Kashmir issue ”.

In the confrontation with the powerful and super-rich bin Salman, the powerful and wealthy Mahathir Mohamad helped Pakistan from 2018 to February 2020, once again serving as Prime Minister of Malaysia and known for anti-American and anti-Israeli slogans.

And with loud "wow!"

Pakistan has lost $ 20 billion all at once, which Crown Prince bin Salman was just about to invest in Pakistan in 2019.

Yumko described the incident in the Pakistan Today newspaper dated 09/05/2021: "But adding insult to injury, Islamabad tried, albeit unsuccessfully, to lead a group of OIC opponents sponsored by Mahathir Mohamad."

Pakistan was faced with enchanting troubles: at the end of 2020, the UAE suspended the issuance of work visas for Pakistanis: only officially, it is 1 million 300 thousand people who earned a piece of bread from Arab neighbors.

To understand how much and how tangible this is for Pakistan, it is enough to cite figures: in October 2020, a month before the visa ban, Pakistan received $ 2.28 billion in remittances from its citizens abroad, of which $ 504 million came from UAE, the second after Saudi Arabia "employer" for Pakistani workers.

And the projected receipts from Saudi Arabia to Pakistan in 2021, according to SBP analysts, will exceed $ 8 billion - this is only remittances from Pakistanis working there to their families.

Riyadh did not cancel work visas, although it kept it on the current agenda, but asked for the return of its $ 6.2 billion loan, which it provided to Islamabad in 2018.

Beijing "outbid" Islamabad from Riyadh and therefore in early August 2020 provided it with its loan of $ 1 billion so that Pakistan could repay part of the Saudi loan.

The terms of the Chinese loan are unknown, but Riyadh has asked for the rest of the loan on principle, and this has literally brought Islamabad to its knees.

To get an idea of ​​the socio-economic state of Pakistan, you can watch the famous Indian film "Slumdog Millionaire".

These very terrible slums and poverty with crowds of vagabonds - this is today's Pakistan.

And the promised multi-billion dollar Chinese investments never pulled him out of poverty - they remained just promises.

Stella Hong Zhang, an expert on China's economic interaction with Pakistan and a graduate student at J. Mason University in the United States, believes that Islamabad is unlikely to count on China's budgetary support: “China can help with the balance of payments, but project financing is another matter.

At present, China will be very cautious about borrowing to finance infrastructure projects. ”

With the election of Biden and the withdrawal of American troops from Afghanistan, Washington's attention to Islamabad has increased, and the United States is very sensitive to Chinese activity in Pakistan (in Peshawar, the Pashtun center of Pakistan, there is a center for financing the Taliban, according to Washington and official Kabul).

It is clear that the shadowy efforts of Pakistani military diplomacy and negotiations with the United States through London have yielded results.

Pakistan has swiftly swung from the "Chinese" extreme to a central position between Beijing and Washington, and today, apparently, has returned to a strategic partnership with the United States and the Arab world.

“Washington desperately needs cooperation with Pakistan to facilitate the withdrawal of its troops from Afghanistan.

Also, the United States is an intermediary in the alleged thaw between Islamabad and Delhi.

However, the most daring assumptions are related to the fact that the United States wants to establish a base in Pakistan, ”said Arif Nizami, editor of Pakistan Today.

Pakistan went to soften with India on Kashmir issues, and on April 21, 2021, a bomb exploded at the Serena Hotel in Quetta (the capital of Pakistan's Baluchistan province), as a result of which five people were killed and 12 were injured.

This happened a few minutes before the Chinese Ambassador Nong Rong was supposed to arrive at the hotel to spend the night - and, despite the fact that one of the terrorist groups claimed responsibility, this is a serious warning to China that it cannot feel safe in Pakistan. ...

Since May 5, exactly on the eve of the visit of Prime Minister Khan to Saudi Arabia, Islamabad prudently closed all land borders with Iran and Afghanistan (obviously, fearing provocations).

Pakistani Army Chief of Staff, General Qamar Javed Bajwa (essentially a gray eminent and de facto head of Pakistan, while Prime Minister Khan, a former famous cricketer, is more the façade of the army behind him) flew to Riyadh on Wednesday. two days before the arrival of Imran Khan.

In a word, even before Khan's arrival, key negotiations took place and decisions were made.

Saudi Arabia has "forgiven" Pakistan and greets him as a brother returning home after a long quarrel and wandering in search of a better life.

The result of the visit of Imran Khan to Saudi Arabia, which ended yesterday:

- Saudi Arabia and the UAE are postponing a $ 2 billion loan repayment for Pakistan until next year;

- Resume project investment work in Pakistan worth $ 20 billion in Gwadar, which looks like an alternative and displacement of China;

- CA and Pakistan are preparing a comprehensive agreement on customs cooperation;

- General Bilal Akbar, recently appointed Ambassador of Pakistan to the SA, is responsible for the coordination of defense and strategic relations between the two countries;

- Khan shares bin Salman's vision in the "Green Middle East" climate project and is implementing the "Clean and Green Pakistan" initiative (the Pakistanis have already begun close cooperation with the EU and, in particular, with the Danes in this direction) - here everyone is waving to the "king of the climate." "At the White House to John Kerry;

- the formation of a supreme coordinating council to oversee the relationship between the CA and Pakistan.

Addressing the Pakistani community in Jeddah, Saudi Arabia on Sunday 9 May, Imran Khan said, “I want to give you good news.

A new Pakistan will soon appear before your eyes.

The country is back on the right path - the path of its real destiny. "

And on Monday, May 10, General Qamar Javed Bajwa flew to Kabul, where he met with Afghan President Ashraf Ghani and Sir Nicholas Patrick Carter, British Chief of Defense Staff.

While the Pakistani authorities were in Arabia, terrible terrorist attacks rocked Afghanistan.

But if, after the talks in Riyadh, Bajwa went to Kabul to resolve the issue, one can really expect an early de-escalation in Afghanistan.

Money and investment will save Pakistan, and Pakistan will begin to save the world in Afghanistan.

Security can be a good commodity.

The point of view of the author may not coincide with the position of the editorial board.