China News Service, Beijing, May 6 (Du Yan Massa) The façade improvement project of Di’anmenwai Street in Xicheng District, Beijing has been launched. The project strives to achieve partial façade image by the end of June and the end of September 2021. The exhibition reproduces the prosperous scene of the ancient capital commercial street of the "front and back markets".   Di'anmenwai Street st 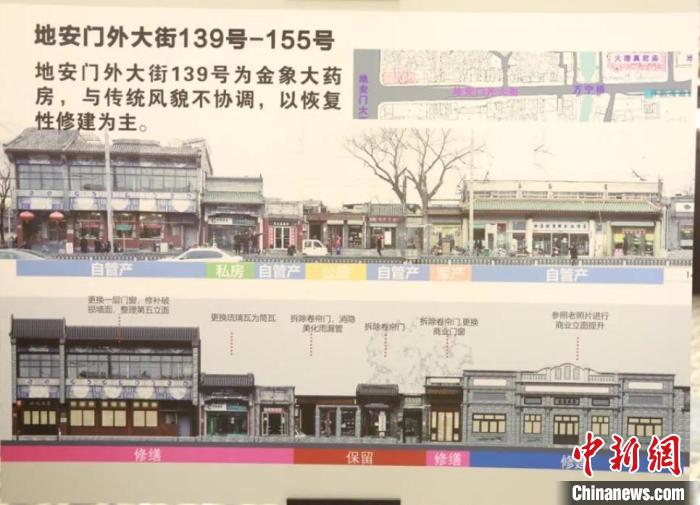 China News Service, Beijing, May 6 (Du Yan Massa) The façade improvement project of Di’anmenwai Street in Xicheng District, Beijing has been launched. The project strives to achieve partial façade image by the end of June and the end of September 2021. The exhibition reproduces the prosperous scene of the ancient capital commercial street of the "front and back markets".

Di'anmenwai Street starts from Gulou in the north, reaches Di'anmen in the south, connects Nanluoguxiang to the east, and faces Shichahai to the west. It is about 730 meters long and 19 to 26 meters wide. It is the starting point of Beijing's central axis.

Since the formation of the Yuan Dynasty, it has not only been the only way to go out of the imperial city, but also the location of the "post market" of old Beijing. It embodies the ancient Chinese traditional "pre-dynastic and post-market" concept of Yingcheng, and its historical commercial functions continue to this day It is the commercial market with the earliest time and the most stable form on the central axis.

Today, the reporter learned from the Beijing Shichahai Fujing Street Construction Headquarters that since the beginning of this year, Beijing’s Xicheng District has been guided by the three-year action plan for the protection of the central axis, following the “one axis (central axis Diwai Avenue) and two wings (Nanluo). District and Shichahai District) three nodes (Gulou, Wanning Bridge and Di’anmen)" spatial layout, strengthen overall planning, intensify coordination and scheduling, accelerate the implementation of the project, and comprehensively improve the overall spatial quality of the outer street, and strive to The Main Street Revival Project has become a benchmark project and a model project on the central axis.

The relevant person in charge of the Shichahai Fujing Street Headquarters said that at present, the "one building, one policy" design plan for the facade along the street has passed the review of experts, and the business format improvement project operation planning report has basically been completed.

On this basis, the façade renovation and commercial operation plan are integrated, and integrated into the fifth façade renovation, the surrounding environment renovation of Wanning Bridge, the lighting of the central axis, the road tree-lined plan and the cultural exploration road, etc., to form an off-site The overall plan of the main street revitalization plan.

Di’anmenwai Street, located in Xicheng District, Beijing, is the oldest and most stable commercial street on the central axis.

Specifically, the plan design takes the restoration of the interface style along the street as the starting point, and follows the concept of "micro renovation, minor renovation, and minor renewal" to systematically upgrade the central axis heritage area and surrounding blocks to shape a complete street.

In accordance with the concept of "high quality, emphasis on culture, and strong leadership", promote the close connection between block renewal and commercial format upgrade, carry out overall format planning, and form "old scenes, new consumption".

The pedestrian system connects the blocks on both sides to construct a pedestrian space integrating east and west cities, and the waterfront promenade is the core to form a block walk system and a central axis cultural exploration road.

Carry out the management and control of the fifth facade of the viewing gallery, comprehensively rectify the key points that seriously affect the traditional style in the south view of the Bell and Drum Tower, and form a coordinated fifth facade with a unified overall style.

With the theme of "time and space circulation, city life", through light and color planning and design, the concept of China's twelve o'clock is integrated into the night life of the old Beijing city, showing the night atmosphere of the traditional style commercial district with the bell and drum tower as the core.

Di’anmenwai Street, located in Xicheng District, Beijing, is the oldest and most stable commercial street on the central axis.

The person in charge pointed out that in the next step, the project will start with the implementation of the basically stable exterior street elevation plan as the entry point, and on the basis of the initial implementation of the directly-managed public housing improvement work, the overall promotion of the exterior façade transformation and the fifth façade will be implemented. Renovation, business format improvement, operation optimization, Wanning Bridge surrounding environment improvement, lighting of the central axis, road tree-lined plan and green landscape improvement 7 work contents.

The relevant person in charge of the Shichahaijing District Management Office said that the renovation and upgrading work adhere to the planning and guidance, and the demolition should go ahead.

On the basis of carrying out unified planning and self-construction, the residents and merchants will implement the "co-construction, co-governance and sharing", and in line with the premise of the old city renewal protection and the central axis application, create a simple, elegant, charming and dynamic commercial district, and jointly create a sustainable The new model of continuous development of neighborhoods.

It is reported that the project strives to display part of the facade image at the end of June and September 2021, respectively.

The overall appearance will be realized before the end of this year, which will reproduce the prosperous scene of the commercial street in the ancient capital of the "front and back".