Norwegian psychiatrist on misinterpreted alcohol theory: "Today they had called it fake news"

The theory that man should be born with half a per mille alcohol too little in the blood laid the foundation for the now Oscar-winning Danish film Another Round. But the theory is not really a real theory, but a misinterpreted preface written by the Norwegian philosopher and psychiatrist Finn Skårderud to a 200-year-old book. 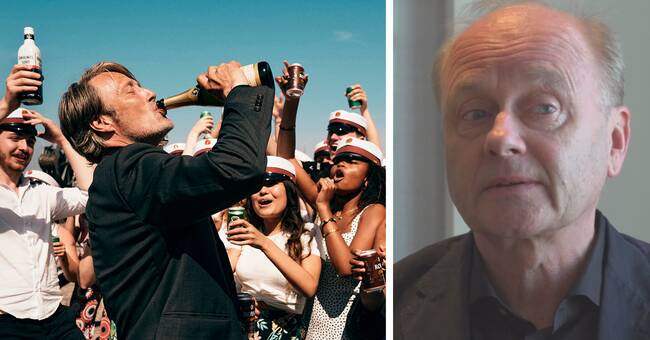 “There is a Norwegian philosopher and psychiatrist - Finn Skårderud, who believes that it actually makes sense to drink.

He believes that man is born with half a per mille too little ".

The quote is taken from Thomas Vinterberg's En runda till.

The film, which follows four middle-aged men as they put this alcohol-positive theory into practice, has been praised by critics, and as recently as last night, the film was awarded an Oscar statuette.

More of a thought experiment

But the theory on which the film is based is not only untested - it is not even a real theory - but a short excerpt from a 20-year-old preface that Finn Skårderud wrote to the book On the psychological effects of wine by Edmondo de Amicis, published in 1880.

- Today you would probably call it fake news.

A while after the preface was published, there were various media outlets when a somewhat over-enthusiastic summer substitute misinterpreted the text in the grossest way, the man behind the "theory", Finn Skårderud tells DR.

Do not want to be an alcohol prophet

In part of the preface, the author only plays purely artistically with the idea that man may have been born with half a per mille too little.

Finn Skårderud has said several times that he did not mean it as a definite theory, but more as a thought experiment.

Skårderud has for almost 20 years been associated with misquotation, which he himself found very frustrating.

- I work with people with major alcohol problems and I meet their families daily.

Then it becomes very wrong to be known as an alcohol prophet at the same time.

Tributes to the film

Although he was worried about his reputation as a professional, he still gave Thomas Vinterberg his blessing to make the film, after reading the script and meeting Vinterberg over a few glasses of wine in Copenhagen.

- It's a fantastic film.

It is rich, complex and with great acting efforts, so nowadays I am just proud to have been a part of the production, says Finn Skårderud to DR.