Seven "Great Power Craftsmen" who have won provincial and ministerial science and technology awards, but can't be rated as a high-level professional title

Seven "Great Power Craftsmen" who have won provincial and ministerial science and technology awards, but can't be rated as a high-level professional title   On May 7, 2020, Lu Xindi inspected the operating status of the diesel engine in the workshop. Photo by Xinhua News Agency reporter Long Lei   7 provincial and ministerial level scientific and technological progress awards (science and tech 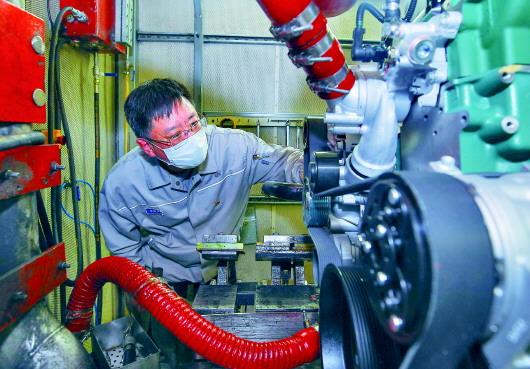 Seven "Great Power Craftsmen" who have won provincial and ministerial science and technology awards, but can't be rated as a high-level professional title

On May 7, 2020, Lu Xindi inspected the operating status of the diesel engine in the workshop.

7 provincial and ministerial level scientific and technological progress awards (science and technology awards), 6 international invention exhibition gold awards, 23 national patents, more than 100 national, provincial, and municipal technological innovation awards... "Great Power Craftsman" Lu Xindi has the conditions Under the circumstances, he was unable to appraise a senior professional title, and the unit's "agree" chapter became the biggest "blocker" and blocked him from being a senior engineer.

Lu Xindi is a representative of the 13th National People's Congress. Xinhua News Agency reporters have repeatedly reported that he "drums and shouts" as a skilled worker. Our newspaper also published the deeds of "Engine Doctor" Lu Xindi in April 2020.

However, he is now deeply worried: "The state has given such a good policy to skilled workers so that we can be judged high, but because of a chapter of the company, we are disqualified. Looking at the whole country, how many skilled workers are there who have encountered the same skills as me? "

Speaking of Lao Lu, everyone at FAW Jiefang Dalian Diesel Engine Co., Ltd. knows that he has a distinctive feature-"stubbornness".

Lu Xindi, 54 years old this year, is a senior engineer of the company. In the past 34 years of working, he has grown from an ordinary worker to a well-known expert in diesel engine assembly and testing in my country's internal combustion engine industry with this "stubborn" energy.

He is known as the "Diesel Engine Debugging King" and has successively won honorary titles such as the National Model Worker, the Chinese Skills Award, and the first Liaoning Craftsman.

In recent years, he has completed a total of 526 innovation achievements, creating economic benefits of hundreds of millions of yuan for the enterprise.

In an experiment, he encountered a question of whether to add or reduce pads. Just ask a colleague next to him to continue the operation, but in order to thoroughly master the technology, he just thought about it for a year.

With this "stubborn" energy, Lu Xindi has gradually become a person who can truly understand the "temper" of diesel engines.

During the bench test of the CA6DK diesel engine, there was a major exhaust failure. Lu Xindi judged that the piston was "burning" by looking at the color and shape of the exhaust, and smelling the smell. It was true when it was disassembled; oil pressure appeared on the BF6M1013 diesel engine. Low failures, the company's production stagnated, and hundreds of diesel engines could not leave the factory. Lu Xindi touched the engine oil with his hand and suggested to change the engine oil and test again. The result is really up to the standard...

Many years ago, the company introduced a world-class product-Deutz diesel engine, and the research and development technology was fully in line with the international advanced technology.

Lu Xindi was the first to be transferred to the newly established production workshop by virtue of excellent diesel engine debugging technology and the reputation of "Diesel Engine Doctor".

Facing the new and complex equipment and technology, he plunged into the data pile, and his notes alone consisted of hundreds of thousands of words.

He overcame more than 100 decibels of rumbling noise from diesel engines. After three years, he compiled tens of thousands of test data after thousands of tests. He took the lead in establishing the "Deutz Diesel Engine Test Method" in the internal combustion engine industry at home and abroad, which enabled my country to have independent The diesel engine debugging technology with intellectual property has filled the domestic gap.

This achievement is not only fully applicable to the internal combustion engine industry, but also widely used in the military and shipbuilding industries, and has a positive effect on energy conservation and emission reduction in China and the world.

Relying on the ability of independent innovation, Lu Xindi turned "made by me" into "created by me", and foreign experts were deeply shocked.

"Why are workers not qualified to appraise senior engineers?"

"I regard innovation as a part of life." At the end of the discussion, there was no sound in the meeting room of FAW Jiefang Dalian Diesel Engine Co., Ltd. Lu Xindi's lips trembled and tears filled his eyes.

What Lao Lu didn't expect was that after submitting the materials, he received a notice from the company that "your materials are not true" and refused to declare for him.

"Under the circumstance that all the conditions are met, it is only because the project I am currently undertaking is written in my materials, and the company believes that the unfinished project should not be written."

It's not just the selection of outstanding scientific and technological talents. As early as two years ago, when the country introduced a policy to allow workers to participate in the evaluation of senior professional titles, Lao Lu was so excited that he stayed up for several nights, but what happened after that poured cold water on him.

In August 2019, Dalian City issued a notice to conduct professional and technical qualification review within the city.

According to the notice of the "2019 Dalian Professional Technical Qualification Evaluation Guide", anyone who "won the third prize of the National Invention Award, Natural Science Award, Science and Technology Progress Award, Spark Award or above...or won the provincial or ministerial science and technology progress award, Spark Award The main finisher of the second prize or above and the equivalent award project" can declare the senior qualifications exceptionally.

According to the "Implementation Opinions on Realizing the Career Development of High-skilled Talents and Engineering Technical Talents in the Field of Engineering Technology (Trial)" issued by the Department of Human Resources and Social Security of Liaoning Province, all "Chinese Skills Award winners enjoy the special government of the State Council" Subsidized highly skilled talents...can be declared as senior engineers in an exceptional manner."

Clearly stipulate that the Chinese Skills Award, National Technical Experts and other honors, as the leader of the national skill master studio and other high-skilled leaders recognized by the government, can apply for professional and technical title review.

According to the above three documents, Lao Lu meets the qualification requirements for the special declaration as a senior engineer.

When Lao Lu asked the relevant department of the company for instructions and asked the company to stamp the application materials, the relevant person in charge replied: “The company’s engineering and technical personnel has not yet had a senior engineer. . Workers are not qualified for evaluation.” For this reason, Lao Lu couldn't figure it out.

He feels that the country has introduced such a good policy, which allows capable skilled workers to be rated as high-level titles, and brings hope and light to the majority of skilled workers. Why do companies not implement national policies well?

Although he can't figure it out, he still works as hard as ever. He feels that after all, he is a worker in a large state-owned enterprise and needs to be conscious.

The reporter's survey found that it is not just Lu Xindi who is in trouble. The technicians in some first-line manufacturing companies are generally low-paid, work intensive, and have weak research motivation.

Some interviewees told reporters that the country has many good policies, but they do not work in enterprises, and some documents are not implemented at all.

Especially in the Northeast, which has more than tens of millions of industrial workers, if the development channel of workers is blocked due to enterprise reasons, not only the recognition and loyalty of employees to the enterprise will be greatly reduced, but the regional economic development and social stability will also be affected to a certain extent.

In recent years, as a representative of the National People's Congress, Lu Xindi has been working hard to improve the treatment of skilled workers.

Beginning in 2018, he has submitted 20 suggestions, nearly half of which are suggestions on improving the development channels and treatment of skilled workers.

"Even if a city grants me 6 million in talent funding support, I never thought about leaving." Lu Xindi said that being able to participate in the senior professional title allows front-line workers to experience a sense of spiritual gain. To lead the demonstration role, let young people see hope, and work hard to learn technology, they can also be rated as senior titles."

Lu Xindi said that the revitalization of the Northeast requires the retention of talents, and the gradual increase in the treatment of skilled workers is the key to attracting and retaining talents.

Although the wages of employees are mainly determined by the employer through the market mechanism, government departments can still take measures and issue policies to encourage enterprises to increase the income level of skilled talents and establish systems such as talents and skills job allowances and special job allowances.

The reporter followed the matter for two years and found that his failure to participate in the evaluation of a senior engineer made Lu Xindi very aggrieved, but he did not work passively because of this, but instead became more frustrated and courageous.

In 2020, due to the declaration conditions exceeding the time limit, Lu Xindi missed the opportunity.

But in the same year, he once again won the second prize of the China Machinery Industry Science and Technology Award, and once again obtained the qualifications to participate as a senior engineer. "I don't know if the unit can stamp me this time." (Reporter Yu Li, Bai Yongquan)