Close to the Al-Haram Al-Ibrahimi Mosque, and between the alleys of the old town in the city of Khalil Al-Rahman in the south of the West Bank, the smell of "Al-Qadrah Al Khalili", which is cooking rice, meat and garlic in a large pot made of iron and copper, from inside a Palestinian house, which has recently turned into a kitchen NS 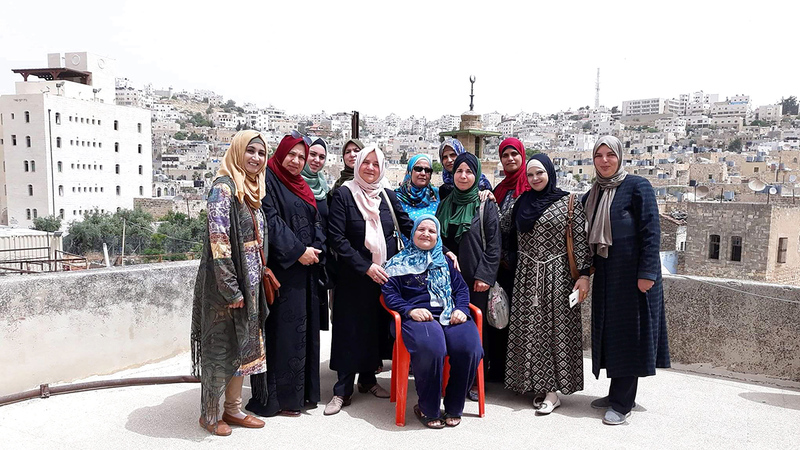 Close to the Al-Haram Al-Ibrahimi Mosque, and between the alleys of the old town in the city of Khalil Al-Rahman in the south of the West Bank, the smell of "Al-Qadrah Al Khalili", which is cooking rice, meat and garlic in a large pot made of iron and copper, from inside a Palestinian house, which has recently turned into a kitchen Feminist, specializes in cooking Palestinian food of all kinds, especially traditional and traditional ones.

The women work as a beehive inside their home restaurant, to cook all the popular home foods that are sold to Hebron families at nominal prices, to support their steadfastness, and to reinforce the principles of social solidarity, due to the deterioration of the living conditions of the residents and poor of Hebron, especially during the holy month of Ramadan.

Close to the Ibrahimi Mosque in the center of the city, Zulekha Al-Muhtaseb (52 years old) lives with her mother in a house surrounded by five outposts, and she and her mother have suffered from violations of the occupation over the past years, since 11 years ago the street in which she lives and a number of families were closed, paying the price for their existence. On the territory of the old town.

A restaurant in a house

"Emirates Today" met the owner of the home kitchen, Zulekha Al Muhtaseb (55 years old), while preparing a menu, which she received via mobile phone and social media, from several Palestinian families in the old city of Hebron, while the women of the restaurant are located in the vicinity, to cook the required meals Before the Moroccan call to prayer on the fourth day of the blessed month of Ramadan.

The owner of the Khalili kitchen says: “I worked during the past years as a teacher, then a translator, and a tourist guide inside the city of Hebron, and because of the great admiration of tourists for Palestinian food, I took the initiative to open a restaurant that serves Khalili meals with its original, traditional flavor, and I did not find a better place than my home where I live since childhood. This is because it directly overlooks the Ibrahimi Mosque and the Old City, so it is a magnet for its visitors.

She added, "The restaurant also tells the story of the suffering of the residents of the Old City, as it is located on the outskirts of Al-Shuhada Street, which has been closed since 2000, and many times the occupation closes the area in which I live."

Al-Muhtaseb continues: “With the beginning of the restaurant’s opening, it was more appropriate for many women in the Old City to participate in establishing and operating a home kitchen, in order for the idea of ​​our project to succeed, and to provide the largest number of food, in addition to providing a permanent source of livelihood for them and their children, in light of the deteriorating conditions of their families. Living ».

The director of the "Khaliliya flavors" kitchen explains that the women working in the home restaurant have all enrolled in food processing courses, which gave them an added experience to their cooking experiences.

According to al-Muhtaseb, women gather in the restaurant daily to prepare popular foods, including the ability of meat and rice, Khaliliyah, al-Musakhan, and maqlouba, as well as pastries and appetizers, for visitors to the restaurant from Hebron, the cities of the West Bank and the occupied Palestinian interior, as well as foreign tourists, who come daily to eat popular meals, And enjoying the view of the Ibrahimi Mosque and the landmarks of the old city from within the home kitchen.

She points out that she receives daily requests from customers and families in the city of Hebron, to cook a variety of home meals, especially in banquets prepared for relatives and relatives, wedding occasions, and Ramadan banquets.

Among the foods that women make, "Khalili flavors," are cake sweets, especially with the approaching Eid al-Fitr.

Cakes of all kinds

The owner of the home kitchen, Zulekha Al-Mohtaseb, goes on to say: “We always produce all kinds of cakes made from dates (al-mishnun) or nuts, and ground sugar (maamoul), and with the holidays approaching, we produce about 150 kilograms of wheat semolina used in making cakes desserts.”

In addition to their work in the Khalili kitchen, the women produce various handicrafts, including the peasant dress and traditional embroideries, to be displayed in local and heritage exhibitions, where they find a remarkable turnout from pioneers and foreign tourists, and those interested in acquiring such products.