Under the patronage of His Highness Sheikh Mohammed bin Zayed Al Nahyan, Crown Prince of Abu Dhabi and Deputy Supreme Commander of the Armed Forces, the Sheikh Zayed Book Award announced the names of the winners of its 15th session, which is the largest session in the history of the award in terms of the number of nominations, as the award received 2,349 t 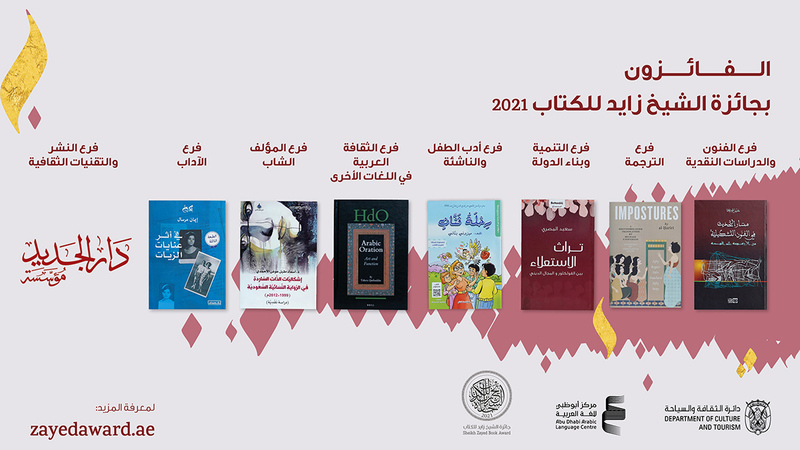 Under the patronage of His Highness Sheikh Mohammed bin Zayed Al Nahyan, Crown Prince of Abu Dhabi and Deputy Supreme Commander of the Armed Forces, the Sheikh Zayed Book Award announced the names of the winners of its 15th session, which is the largest session in the history of the award in terms of the number of nominations. 2020/2021, an increase of 23%, compared to the previous cycle. The list of prize winners, organized by the Abu Dhabi Center for Arabic Language, affiliated to the Department of Culture and Tourism - Abu Dhabi, included seven writers and researchers from Egypt, Tunisia, Saudi Arabia and the United States of America, in addition to a Lebanese publishing house.

In the Literature Branch, the Egyptian writer Iman Mersal won for the book “On the Impact of Inayat Al-Zayat”, published by Dar Al Kutub Khan in 2019, while the Tunisian writer Maysouni Bennani won in the Child Literature Branch, stemming from the story “An Artist’s Journey”, published by the House of Sociology for Publishing in 2020 The American translator Michael Cooperson won the translation branch for his book "Impostures", which is a translation of "Maqamat Hariri" from Arabic into English, and was published by the Arabic Literature Library of New York University - Abu Dhabi in 2020.

Saudi researcher Asma Muqbel Awad Al-Ahmadi won the Sheikh Zayed Book Prize for the Young Author branch, for a study entitled: “The Problems of the Narrated Self in the Saudi Feminist Novel - A Critical Study (1999-2012)”, published by the Arab Science Publishers in 2020, and also won Tunisian researcher Khalil Quwaia in the Arts and Critical Studies branch, on the book "The Path of Modernization in Fine Arts from Drawings to Painting", published by Muhammad Ali Publishing House in 2020, while the researcher Dr. Said Al-Masri from Egypt won the Development and State Building Branch Prize for the book "Heritage Supremacy between Folklore and the Religious Domain, "published by Battana Publishing and Distribution in 2019. American researcher Tahera Qutbuddin won the Arab Culture Branch in Other Languages ​​Prize for the book" Arab Rhetoric: Art and Function ", published by Brill Publishing in 2019.

The Lebanese Dar Al-Jadid won the Sheikh Zayed Book Award for the Publishing and Cultural Technologies Branch, in appreciation of its contribution to shedding light on forgotten and neglected topics in Arab publishing, and its prominent role in providing the Arab library with distinguished scientific books and linguistic and intellectual studies.

In the context, Chairman of the Department of Culture and Tourism - Abu Dhabi, Mohammed Khalifa Al Mubarak, said: “Since its inception in 2006, the Sheikh Zayed Book Award has succeeded in consolidating its position as a beacon of culture and literature, and it enjoys a prominent position at the international level thanks to its continuous support for creativity.

This inspiring award is a tribute to the memory of the founding father, the late Sheikh Zayed bin Sultan Al Nahyan, whose insightful vision in building the UAE was closely linked to culture, knowledge and the advancement of mankind.

For his part, the Secretary General of the Award, Dr. Ali bin Tamim, President of the Abu Dhabi Center for the Arabic Language, congratulated the winners and thanked all applicants for the award, and said: “Despite the challenges posed by the (Covid-) pandemic last year, the Sheikh Zayed Book Award has witnessed an exceptional year. In terms of the number of nominations and the quality of the work involved.

We are proud to contribute to the support of the thriving international publishing sector, given the award's position as one of the most prominent pioneering cultural awards in the Arab world, and we are pleased to see the cultural and intellectual diversity of the winners.

Perhaps what impressed the jury the most was the diversity of literary and research methods that characterized the participating works, and the topics raised by writers and researchers.

• Honoring “Dar Al Jadid” in recognition of its contribution in shedding light on forgotten and neglected topics in Arab publishing.