Chinanews.com, April 23. The creative program "Let's Go Online!" launched by the Art Program Center of China Central Radio and Television. The ninth issue of "Hua Cai Youth" was broadcast. After 67 days, 36 Hua Cai youths made their debut, one-on-one creative additions, and group theme creations. 140 stages were presented and finally embarked on the stage of the Hua Cai festival. . Site map 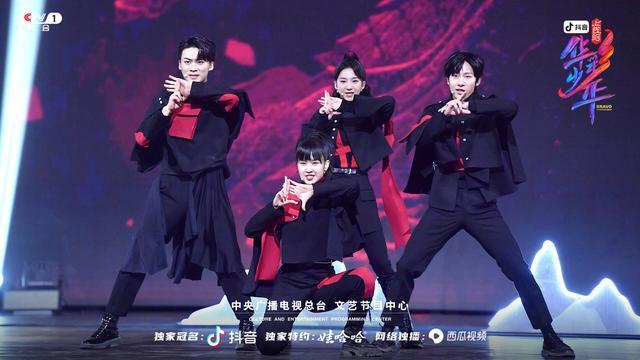 The ninth issue of "Hua Cai Youth" was broadcast. After 67 days, 36 Hua Cai youths made their debut, one-on-one creative additions, and group theme creations. 140 stages were presented and finally embarked on the stage of the Hua Cai festival. .

In this issue, the 16 teenagers will be divided into four groups, with the four themes of "huacai", "vigorous", "light up" and "future", which implies the theme of "our future lights up 2021".

Those who are not online will also cooperate with the online officials to bring a wonderful stage show together.

The four young incarnations of the Huacai group became knights and online official luthiers, leading the audience through time and space to the scene of the ancient "Let's Go Online" Huacai token competition.

The teenagers competed for the token. Zhang Leyao and Shen Bohuai took part in this "dance of competition", incorporating a secretly dark scene from the classic opera fragment "Sanchakou", paying tribute to the classics, and giving this competition a full of martial arts feelings.

In the end, the teenagers went from fighting individually to finally working together to get the token.

The Fenggu Group paid tribute to the good Chinese sons and daughters who guarded the frontier and defended the country with the frontier poem "Liangzhou Ci".

However, the unexpected situation did not affect the performance of the teenagers. Fang Yangfei and Bai Yuhao's double sword dance gave this performance a strong and iron spirit.

In response to the unexpected situation at the beginning of the performance, the online official Wang Junkai shared his performance experience with the teenagers. The online official Nigmaiti also joined and talked about the one-time solution to Wang Junkai’s performance microphone problem: "It was the live fans who saved it. He." He said with a smile: "You will also gain your own fans through your hard work. They will become your underpinning and support you to move forward."

The teenagers in the light-up group are ingenious and tell their stories from the perspective of a narrator.

As the Beijing rhyme drum beats, pop music, Beijing opera, and Kunqu opera are reflected on this stage. They are different in origin, but harmoniously blended.

They are each other's competitors, and they are the best partners and teammates. They gather together, sing while walking, and use the most sincere and simple way to light up the brilliance and light up the future.

The online official Dong Yi encouraged the teenagers: "As long as there is a dream in your heart, there will always be light ahead." The online official Ouyang Nana was also touched by this dream chasing story and shared with the teenagers her experience of pursuing music dreams, "If you watch When you have this kind of love and enthusiasm, continue to work hard, so you have to believe in yourself."

At the beginning of the performance of the future group, the audience was surprised by the futuristic and dreamlike dance beauty.

The four "mechanical boys" take the audience to the future and perform the mammoth crossing in a forest painted with lights. This song is adapted from Huo Zun's "Crossing!"

"Mammoth" calls on people to protect the ecological environment.

This stylish and futuristic song has been praised by the online officials. Ouyang Nana praised the acapella part of Acapella in the middle of the song. She studied at Berkeley Conservatory with Huang Zihong and met old friends on stage. , Recall the old things of cooperation together.

In addition to the 16 online teenagers, the teenagers in the non-online area also cooperated with the online officials in the show and brought wonderful performances. Tian Miaomiao and Feng Sheng, who were learning Peking Opera, finally dressed up in costumes, while Xu Yihang and Yang Chaoyang played respectively. For guitar and piano, he collaborated with the online official Dai Quan for a song "Jun is a Mountain".

At the end of the song, Wang Peiyu praised the two opera boys and found the familiar selves in the costumes. They were extremely confident in their gestures.

She sincerely thanked the show: "Thank you Huacai Juvenile for giving the two Peking Opera performers a chance to show off their kung fu." Ouyang Nana also brought a fresh performance show to the audience, a song "Girl" to explain her own progress. Dream determination.