'Tikitaka' Jang Hang-jun, "My life is always better than the face value… 500% or more profit from stock investment"

Kokomu Jang trio boasted a sense of entertainment. In SBS'Tikitaka' broadcast on the 18th, the chapter trio of'The Story of the Day Biting the Tail of the Tail' boarded as the second guest. 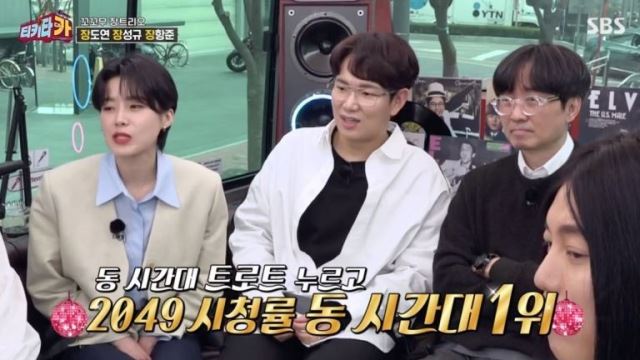 In SBS'Tikitaka' broadcast on the 18th, the chapter trio of'The Story of the Day Biting the Tail of the Tail' boarded as the second guest.

On this day's broadcast, the production crew said, "Kokkomu was selected as the most successful program of 2020 selected by the SBS president. The 2040 ratings also won trot broadcasts in the same time period."

In response, Eum Moon-seok and Tak Jae-hoon praised the Jean Trio, saying, "When three people talk, they act out the situation, and that increases the immersion. Because they are so good at acting, they make the story more excited." In addition, he added that revealing the unknown inside the story we know is the charm of Kokomu.

After hearing this, Hang-Jun Jang said, "If the production crew takes on the case, we will cover it for two months. And, if they do not give permission, they will be unable to broadcast the case. I have a sense of mission to convey," he said, and paid high attention to the production crew of'Kokomu'.

Tak Jae-hoon said, "Our'Tikitaka' production crew also has a lot of hardship. I have a lot of trouble because I have to take care of me, Gura, and Moonseok even have a wig."

And Jean Trio complained that Kokomu must be familiar with the script. So Doyeon Jang asked about the other MCs, saying, "The script is 35 chapters, and you need to be familiar with it, so studying is essential. So I must watch 7 times and rehearsal 2 times." Then Jang Hang-jun said, "I don't really work hard," and he listened to Jang Do-yeon and Jang Seong-gyu's pincups. Hang-joon Jang said, "No. I don't want to work hard, but I work hard. That's because I know how big their grievances are while working as a broadcast writer."

On this day, Do-yeon Jang surprised everyone by showing Louis Armstrong's vocal reproductions. In particular, Jang Hang-jun said, "It wasn't surprising that the life of a celebrity wasn't easy. It's amazing to have such a voice at this point of time."

Tak Jae-hoon admired, "Doyeon is shy about saying hello to someone. And he's a child with a lot of shyness that he doesn't even change KakaoTalk Psa. I don't know how to do this with such a personality," said Jang Doyeon, "I'm trying to make money." I gave an immediate answer and made me laugh.

And on this day, Hang-Jun Jang made a loud voice saying that there were a lot of publicity broadcasts for'Kok Komu. As a result, Kim Goo-ra asked if it was because she was busy doing housework at the same time. Then, Hang-Jun Jang drew attention by revealing that he participated in the Green Mothers Association, starting with the parental general meeting held at the children's school. Jang Hang-jun said "I like it and my wife doesn't care much differently than me. So naturally, I tend to attend child-related work.”

In addition, the first thing I do after waking up every morning is to search for my name on social media, but a post that witnessed myself in the Green Mothers' Association was posted on the SNS, which made me laugh by saying that I was surprised.

And Jang Hang-jun aroused envy by revealing that he made a huge return on investing in stocks. He said, "The yield is definitely over 500%," and "Strangely, what I had was just going up." In response, Gura Kim envied, saying, "It seems that there was ubiquity in the four weeks. The case where there is rehabilitation even though we do not make great efforts is called ubiquity. Then Jang Hang-jun said, "Life has always been better than the face value so far," and said, "And I like myself so much. I like talking wit. So I laughed at the entertainment that I came out of at home," and boasted of self-love.

Meanwhile, at the end of the broadcast, the chapter trio picked Eum Mun-seok, who showed the best reaction, as the MC that he would most like to invite as a story friend.