Exploring Precipice Archaeology: Take you to know such archaeologists (Figure)

Chinanews.com, Pingdingshan, April 10th, title: Exploring Precipice Archaeology: Let you get to know such archaeologists   Reporter Li Guigang Li Chaoqing   Have you seen archaeological excavations on cliffs? What was the "mansion" of ancient humans 30,000 years ago? What are the ups and downs behind the "post-80s" and "post-90s" archaeologists? The picture shows the aerial photography of th 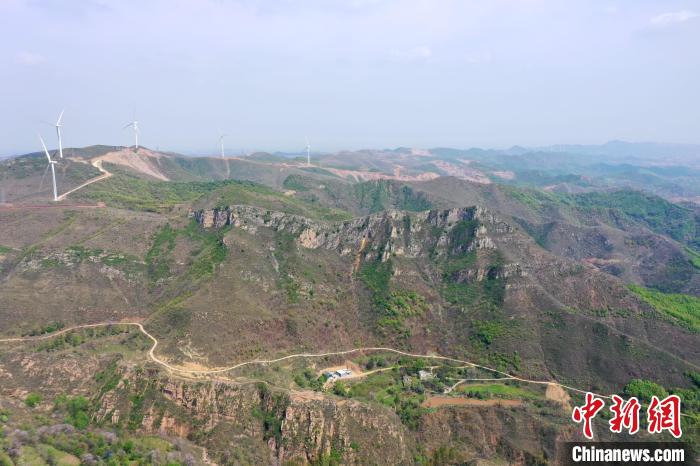 Have you seen archaeological excavations on cliffs?

What are the ups and downs behind the "post-80s" and "post-90s" archaeologists?

The picture shows the aerial photography of the Xianren Cave in the transition zone between the mountains of western Henan and the Huaihe Plain. Photographed by Li Chaoqing

On April 9th, the reporter followed the footsteps of cliff archeologists over mountains and ridges, rock climbing, and visited the Paleolithic relics of Xianrendong, Lushan County, Pingdingshan City, Henan Province. Together with archaeologists, they felt the hardships of cliff archeology and explored ancient times together. Human survival wisdom.

The picture shows the fairy cave on the cliff, photo by Li Chaoqing

The Paleolithic archaeological survey project in Lushan area, which is located in the transition zone between the mountains of western Henan and the Huaihe plain, started in 2019.

Archaeologists have discovered 46 caves here. Among them, the Xianrendong site that is under archeological excavation is located on a cliff. Archaeologists have found traces of ancient human life in the cave, unearthed animal fossils, human teeth, skull fragments and other relics. .

The picture shows the archaeologists starting to go up the mountain. Photo by Li Guigang

Xianren Cave is located on a steep wall of a mountain in Guanyinsi Township, Lushan County, with an elevation of 576 meters and a vertical height of 193 meters from the modern river ditch.

Looking up from the bottom of the mountain, the fairy cave is looming.

However, this section of the mountain road, which is less than 200 meters in a straight line, is covered with gravel, gravel, bushes, thorns, etc. It is difficult for ordinary people to climb on it without the help of tools.

It is such a mountain road. Archaeologists go up and down four times a day, and some branches were found to be "paved" during the climb.

"Initially last year, when we first discovered this cave, it was almost an hour before the mountain. Because there were basically no roads at that time." Zhao Qingpo, the head of the Lushan area paleolithic archaeological survey project of the Henan Provincial Institute of Cultural Relics and Archaeology, recalled. "Climbing is very difficult, you can only go up with the help of branches, rocks, and climbing tools."

Later, the archaeological team built a simple curved hiking trail and installed climbing chains on the cliffs next to Xianrendong.

"If it's fast now, it's basically half an hour to go up or down the mountain."

Although it is not easy to go up and down the mountain, the archaeologists enjoy it.

Gao Xu, a member of the archaeological team who was born in 1985, regards going up and down the mountain as a journey to develop a "slimming plan".

After nearly a year of exercise, he lost 10 pounds.

Not to be underestimated "post-80s" archaeologists: drones give keys

The picture shows the archaeological team using the climbing branches to figure out the "paved pulp".

Not only Gao Xu is an "80", Zhao Qingpo, who is in charge of the Paleolithic Archaeological Survey Project in Lushan, is also an "80".

The picture is taken by Li Chaoqing in the fairy cave

Not to mention that Zhao Qingpo is "80", but he is an expert in Paleolithic archaeology at the Henan Provincial Institute of Cultural Relics and Archaeology. He has participated in the archaeological excavation of the Xuchang people site that has attracted much attention from the public at home and abroad.

This time, he led an archaeological excavation for the first time.

Regardless of their youth, they are extremely demanding at work.

During the reporter's interview, the archaeological team found a carbon sample in the excavation level at a depth of 73 cm from the surface of the cave.

An archaeologist almost missed a carbon sample during the screening process.

Suddenly, Zhao Qingpo lowered his face and criticized his teammates: "How many times have you said that you have to be careful and meticulous, and want to deduct wages?"

In addition to being rigorous and responsible for his work and looking forward to working in the mountains, Zhao Qingpo rarely visits his wife and children in Qingdao.

He said, "We wake up at 6 o'clock every morning. After get off work, Mr. Zhao and I have to sort out and count the unearthed objects, write materials, upload photos, and work almost every day until the mountains are quiet at night."

For the "80s" and "post-90s" archaeologists, the archaeological work in the deep mountains is boring and tiring, but not happy.

The picture shows archaeologists looking for mobile phone signals at the entrance of the cave. Photo by Li Chaoqing

"In the beginning, not only the mountain roads were difficult, but the conditions were difficult. There was no internet on the mountain. The two temporary archaeologists ran away after working for a day." Lei Guojun said, but the habit is just fine.

At about 12:40 noon that day, the archaeologists went down to the station below the mountain, and the sweaty Lei Guojun sat down on the ground and ate noodles by the door.

At 2 o'clock in the afternoon, after a brief rest, more than 10 archaeologists started the archaeological work of the cliff again.

Climbing halfway up the mountain, Lei Guojun suddenly discovered that he could not enter the archaeological site without the key to the iron gate of the fairy cave.

The picture shows the scene of archaeologists going down the mountain.

So Lei Guojun called Zhao Qingpo at the foot of the mountain by video and asked him to send the key up with a drone.

On that day, the valley was windy.

After Zhao Qingpo took off the drone, he successfully delivered the key to Lei Guojun after several attempts.

"It saves me running down the mountain, which saves a lot of time." Lei Guojun said that drones are only part of their work innovation, and they also invented multifunctional camera aids.

The picture shows the post-90s generation Lei Guojun sitting on the ground and eating noodles. Photo by Li Guigang

On the 9th, the reporter followed the archaeological team to climb the rugged mountain road for nearly an hour before they could get a close look at the magical work of the fairy cave. Stepping into the cave, it suddenly became clear and unique.

This cave that lives by water can be described as the "mansion" of ancient humans. Looking down from the mountain, the cave is deep, steep and steep. It is not only surrounded by mountains and rivers, with large space, but also shelter from rain and wind, and protection from beasts. Easy to hunt and pick wild fruits.

The picture shows the relics unearthed in Xianrendong, courtesy of the archaeological team

"The cave is 9 meters long, 3 meters wide, and 3.9 meters high. The area inside the cave is about 30 square meters." Zhao Qingpo said, "Compared with the 40 caves found in the surrounding area, the Xianren Cave was considered a'mansion' in ancient times. Basically, about 10 people can live, five or six people should be no problem."

Then, why did the ancient humans choose to live in the fairy cave instead of other caves?

Why did you choose such an ideal living place?

The picture shows the archaeologists sifting through the soil relics.

Zhao Qingpo speculated that the ancient humans actually presupposed survival, which is more popularly speaking, to live, and instinctively chose caves that are safe, have a suitable environment and climate, and are close to water sources.

"There is a river below the entrance of this cave. This is very convenient for the ancients to fetch water and use it." Zhao Qingpo said, "In the Paleolithic age, ancient humans did not make water containers, so they would definitely choose a water container first. A place close to the water source."

In addition, Zhao Qingpo believes that the Xianren Cave is relatively high, with an altitude of 576 meters and a vertical height of nearly 200 meters. "This place was also an easy to defend and hard to attack place for the ancients, and it was easy to prevent wild animals from coming in and attacking humans."

Zhao Qingpo believes that the survival choice mentioned above can also be said to be a manifestation of ancient human wisdom.

The age of Xianren Cave and Tianyuan Cave remains the same

The Xianren Cave was first discovered on June 19, 2020, and entered the cave for the first time on July 25. Human fossils, animal fossils, stone tools, etc. were found in the cave.

In 2020, four exploration squares I, L, O, and S of Xianren Cave I will be unearthed, covering an area of ​​about 4 square meters.

The surface floating soil was sieved before excavation, and more than 10,000 animal bones were screened out, which were severely broken. The currently identifiable species include cattle, horses, sheep, bears, deer, pigs, large carnivores and some small rodent mammals, etc. , Most of the maximum length is less than 2 cm.

The excavation depth is 2.40 meters and is divided into 48 horizontal layers.

According to Zhao Qingpo, among them, animal fossils, human teeth, skull fragments, etc. were unearthed in the 1st to 9th level. In the 18th level, there is a layer of small gravel with a particle size of about 2 mm in the four prospecting areas. The roundness is good, and it is suspected that the cave has experienced weak dynamic water flow at this stage.

The time span of the Paleolithic Age started from about 3 million years ago and continued to about 10,000 years ago.

The picture shows more than 10,000 relics unearthed at the Xianrendong site. Photo by Li Chaoqing

"Xianrendong dating is in line with the Paleolithic time span." Zhao Qingpo said, the typical characteristics of the Paleolithic era are mainly humans using stone tools as labor tools and human fossils.

At the site of the archeological work team, Zhao Qingpo took out a horse tooth fossil and said, “A normal horse cannot enter the cave, so it is very likely that a person brought it in. Combine it with some of the animal limb bones just mentioned. The cut marks are relatively certain to be human behavior, proving that humans had already lived in this cave at that time."

The picture shows the archaeologists using drones to deliver the keys. Photo by Li Guigang

Measured by the carbon 14 method and the uranium series method, from the dating results that have been obtained so far, the age of Xianren Cave is comparable to that of the Tianyuan Cave site in Beijing.