In the Drôme and Ardèche, the negative temperatures last night caused significant damage to the fruits, ahead after a hot and sunny March 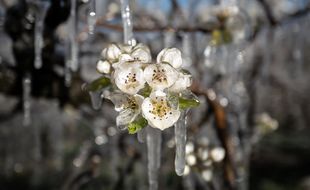 The frost caused significant damage in orchards in Drôme-Ardèche.

Arborists in the Rhône valley were unable to cope with the severe frosts that affected their orchards overnight from Wednesday to Thursday, with considerable losses as a result.

“At least 80% of our production is affected,” explains Daniel Betton, based in Mercurol-Veaunes (Drôme), which operates 55 hectares of apricot orchards.

“The fruits that had already come out have changed color.

Inside, the almond has turned from white to brownish.

He and his son unsuccessfully used heating candles in an attempt to combat the predicted cold.

“The temperature became negative from midnight and at the stroke of 7 am, we dropped to -4 degrees.

🥶🔥 In many areas, arborists have had a very difficult night.

Here, braziers to counter the frost of apricot trees in Loriol-sur-Drôme.

"We have vegetation advances of at least 15 days compared to other years, which means that the consequences look formidable since the apricots were already at the berry stage", indicates Bruno Darnaud, secretary of the chamber. of agriculture of Drôme, in charge of arboriculture.

“The arborists fought all night.

Those who irrigated to protect had the opposite effect, as the cold was dry, they ended up with up to 4 centimeters of frost on some trees, ”further describes Bruno Darnaud.

In neighboring Ardèche, "we have gone down to minus 7 degrees in some orchards and even areas that are normally non-freezing are concerned," announces Bernard Habauzit, responsible for the management of agricultural disasters at the Chamber of Agriculture.

One night trying to fight the frost

The means widely deployed by farmers were not enough to protect crops.

"We watered, we heated and nothing worked," says Stéphane Leyronas, whose kiwi shoots from the Aubenas basin broke under the weight of the ice accumulated after he had recourse to the aspersion.

"I also used a gas cannon and lit more than 700 heaters which did not even last through the night", the cold episode lasted so long.

"We selected the main slope and we burned bales of straw and piles of wood to try to save what could be saved," says Rémy Nodin, winemaker in Saint-Péray (Ardèche), that adrenaline keeps up after a sleepless night.

“The goal was to have a smokescreen so that when the sun comes up, it doesn't burn the vines because of the humidity”.

"The buds of the vine have withered, some vines that were well advanced 2-3 centimeters high have blackened", he notes however.

A veil of pollution

In the Rhône and the Loire, "all sectors are affected but it is still too early to measure the damage", comments Christophe Gratadour, arboriculture advisor to the chamber of agriculture.

"We are particularly concerned about the risk of sap stoppage on trees which have undergone significant temperature variations in a few days".

At the end of March, the thermometer had exceeded 25 degrees in several sectors of these two departments.

Thursday morning, the fires lit by the farmers generated a veil of pollution over the Rhône valley, leading the air quality monitoring body Atmo Auvergne Rhône-Alpes to trigger a "yellow vigilance" with regard to " significant particle levels ”.

Its director Marie-Blanche Personnaz underlined that the farmers were "completely within their rights" by lighting these fires, often blocks of paraffin, but also other combustible materials.

"But we should perhaps work on the problem and find other solutions when the phenomenon (of freezing) is massive," she noted.

Gironde: With -5 degrees recorded, a first wave of frost hits the Bordeaux vineyards