The Rennes animated film festival will have its second online edition and wants to offer an alternative program for young and old. 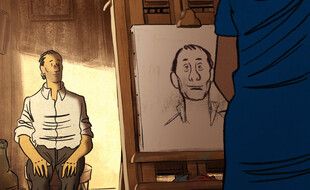 The film Josep was one of the great successes of French animation cinema in 2020. -

The films from here Mediterranean

It's a tug of war for some parents.

A questioning for others.

A categorical no for a minority.

And unlimited use for a few.

With schools closing, many children will see their time spent watching cartoons increase in the coming weeks, as their parents attempt to work from home while supervising schoolwork.

Should we be afraid of it?

No, but you have to frame it.

This is what the Rennes animated film festival is trying to do, which will have its second online edition from April 7 to 20.

Private cinema, the event decided to invest the Web by offering 150 films for young and old.

With a pronounced taste for the authentic, the funny and the sensitive.

You won't see a Ninjago, Paw Patrol, Pokemon, or Disney in the lineup.

“We must not demonize the platforms.

There will always be and we must integrate them.

But the role of a festival is to show that there is something other than the mainstream channels ”, explains Sabine Zipci, general delegate of the Association française du cinema d 'animation (AFCA), which coordinates the event.

Since its beginnings in 1983 and its move to Bruz (Ille-et-Vilaine) in 2010, the festival has continued to highlight French know-how in the field of animation and educate the public in its passion for cartoon.

“For children, it is often the first experience in the cinema.

We don't go there just to see a film, we go there to make a discovery, to visit a cultural place in a collective setting ”.

Sabine Zipci is the AFCA delegate, which coordinates the organization of the Rennes animation film festival.

If the dark rooms are closed, the “screenings” continue but have been moved to the living rooms of confined families.

“The screen is not to demonize or ban, but it must be framed.

The ideal is to live the experience with them, to give them the choice and to talk about it.

We can prepare the screening, evoke the story, take a break when everything is not understood, ”says Sabine Zipci, while recalling that she“ is not a doctor ”.

A few months ago, we interviewed Séverine Erhel, lecturer in cognitive psychology and ergonomics at the University of Rennes 2. Her comments were in the same direction.

“We focus on connection time but it all depends on the content.

It's more complex than saying “You let your kids too much in front of the screen”.

Some studies have shown that children who watched educational and quality programs saw their language level improve ”.

Animation cinema has understood this well and offers a very wide range of content, for young and old alike, from artisanal short films to feature films like

, directed by Aurel and which is drowning in trophies. , or

“Animation is not a genre but a set of technical processes.

It is even a cinematographic language, ”concludes Sabine Zipci.

A language that likes to mix the techniques of 2D, 3D, puppets or plasticine.

Proposed as a "classic" festival, the online version of the event will be partly paid but hopes to find its audience.

It remains to be seen whether young and old will want to put themselves in front of a screen that has become omnipresent.

Rennes Animation Film Festival, April 7 to 20 on the CinéCapsule site.

César 2021: The animated film "Josep", which is drowning in trophies, almost never saw the light of day

"Calamity": Why her dirty character makes Martha Jane Cannary a heroine of today