A draw 22 seconds from the end and victory, 4-3, in overtime. It took Färjestad to the quarter finals - Malmö can check in on holiday. - It's too damn, says Malmö's Emil Sylvegård to L C More. 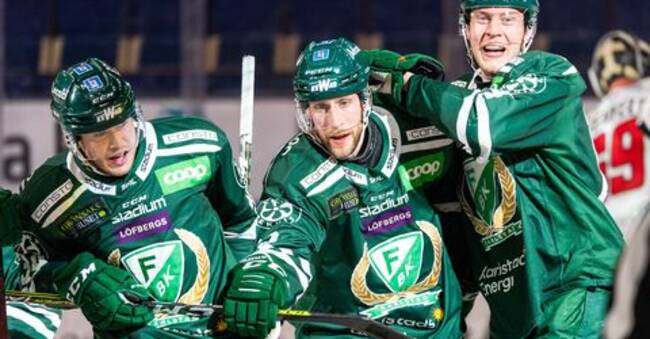 Big match winner for Färjestad against Malmö - in addition to Per Åslund who put 3-3 in the closing seconds, was the match hero Oskar Bäck who decided the meeting and took the Karlstad team to a quarter final.

I throw myself at the puck and it finds its way in, says Bäck to C More.

Malmö got off to a flying start

The demand for Malmö before the meeting with Färjestad was simple.

Skånelaget, who came ninth in the SHL, started the match at a rapid pace and Skånelaget had a 10-0 shot against goalkeeper Henrik Haukeland when Stefan Lassen found the net with a shot from blue - after only 5.46.

Färjestad did not get his first shot on goal until after eight minutes - and after some upswing, Daniel Viksten equalized to 2-2 after just over 13 minutes of play.

Then Malmö's goalkeeper Oscar Alsenfelt had also stopped a penalty from Michael Lindqvist a couple of minutes before.

In the third, the forward got revenge and gave the home team a lead before the third break.

- We let Malmö take command but we move up in the latter part of the second, that's how we want and must play.

It is not possible to just hunt, says Michael Lindqvist to C More.

In the third, Carl Persson equalized after a delicious performance when he poked in 3-3 next to the nearest post via the kitchen road and the turn was a fact a few minutes later when Matias Lassen struck again - with his third goal of the season.

4-3 and time ticked Malmö's path in the hunt for a third and decisive match.

In the final minutes, Färjestad took the goalkeeper out with the goalkeeper and hit the crossbar with 2.21 left but only 22 seconds before the period signal, Per Åslund pushed the equalizer to 4-4, his second for the evening.

Färjestad had a puck in the post in extra time but shortly afterwards Oskar Bäck scored the winning goal and now awaits the quarterfinals against either Rögle or Växjö after 2-0 in matches.

Somehow we are so close but it is very careless, says Malmö's team captain Emil Sylvegård to C More.