National railways welcome the peak of return passenger flow on April 5th. 14.25 million passengers are expected to be sent

Chinanews.com client, April 5, reporter learned from China National Railway Group Co., Ltd. (hereinafter referred to as "China Railway Group") that on April 4, the national railways sent 9.332 million passengers, and 497 passenger trains were added for transportation. Safe, stable and orderly. April 5 is the last day of the Ching Ming Festival. The national railways ushered in the peak of return 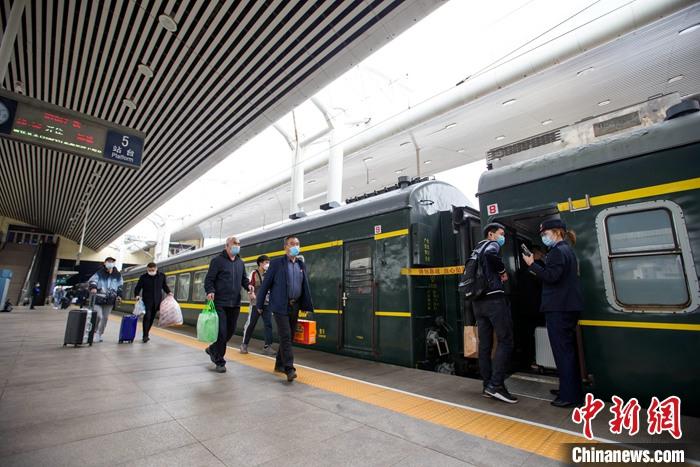 April 5 is the last day of the Ching Ming Festival. The national railways ushered in the peak of return passenger flow. It is estimated that 14.25 million passengers will be sent, and 1180 passenger trains are planned to be added.

In order to cope with the peak return passenger flow, local railway departments coordinated epidemic prevention and control and transportation organization, continued to increase transportation capacity, flexibly opened passenger trains, and introduced a number of convenient services for the people, striving to create a warm journey.

The Hohhot Group Corporation has launched the "Colorful Hada" service to provide appointment services for key travelers such as the elderly, the young, the sick, the disabled, and pregnant.

The Xi'an Bureau Group Corporation has expanded the capacity of the Xi'an-Chengdu high-speed rail in various ways, and an average of 7 minutes of trains between Xi'an and Chengdu has been realized, helping tourists along the route to return smoothly.

Shanghai Bureau Group Corporation organizes party members and volunteers to serve passengers at stations in popular tourist destinations such as North Huangshan, and guides travel in an orderly manner.

The Guangzhou Bureau Group Company dynamically analyzed the big data of standby ticket purchases, and added 16 trains on popular lines such as Xiamen-Shenzhen and Nanguang high-speed railways to accurately meet the travel needs of passengers.

The Chengdu Bureau Group Company added night EMU trains from Chongqing to Zunyi and Chengdu to Chongqing to facilitate the return journey of passengers.

The railway department reminds the majority of passengers that during the holidays, the passenger flow of stations and trains is large. Please take personal hygiene protection during the journey and cooperate with the railway department to implement epidemic prevention measures for stations and trains to jointly maintain a safe and healthy travel environment.

Specific train operation and service information can be inquired on the railway 12306 website (including mobile client).