The French nuclear tests in Algeria ... the forgotten tragedy

Nuclear tests conducted by France in the Algerian desert between 1960 and 1966 to enhance its nuclear capabilities, and thanks to which it was able to enter the club of nuclear states after the United States of America, the Soviet Union and Britain. 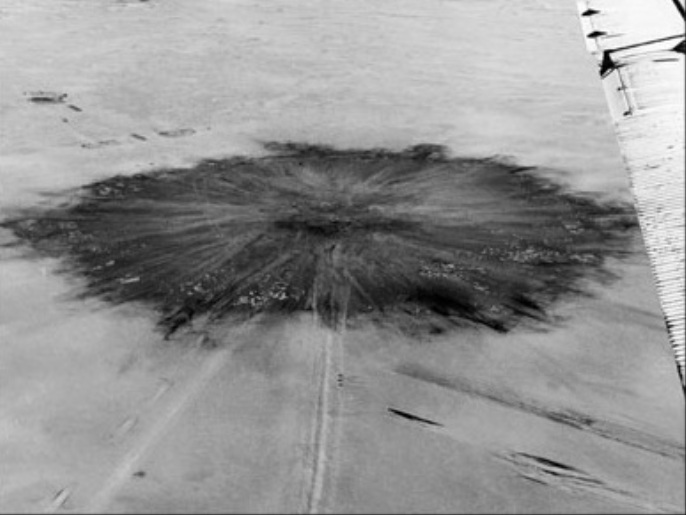 , and thanks to which it was able to enter the club of nuclear states after the United States of America, the Soviet Union and Britain.

France emerged victorious from World War II, but its dignity was undermined, and the specter of the Nazi occupation and the possibility of its replication at the hands of another foreign power became the biggest concern for political leaders.

The French Prime Minister at the time, Pierre Mendes, ordered France to start establishing a nuclear test center in early 1957, and the French islands in the Pacific and Atlantic oceans (such as La Reunion, Polynesia, and Passage) that would later host important stages of the French nuclear program were at the top of the candidate sites for the project.

However, logistical obstacles prevented experiments from being conducted in those distant islands, so thinking about the vast and sparsely populated Algerian Sahara began.

Reasons for the selection

As work began to explore opportunities for testing in the Pacific or the Atlantic, problems arose in the transportation of nuclear materials and sensitive equipment to test sites.

At that stage, aviation had not reached the level of sophistication to enable the transport of cargo to La Reunion, transit or Polynesia without the need for a technical stopover on foreign soil, which is totally unacceptable for security reasons.

In light of this, the choice fell on the relatively close Algerian Sahara, which is still part of France abroad at that day.

Thus, the choice fell on the "Reggan" region, which is located in the state of Bechar, about 1,500 km southwest of the capital, Algiers, and the construction of an experimental track was launched in November 1957.

the first French nuclear test in Algeria was called the "Blue Jerboa", and it took place on February 13, 1960 under the direct supervision of then-French President Charles de Gaulle, and the detonation on the surface was five times the intensity of the explosion caused by the Hiroshima bomb.

Historical accounts say that Israeli experts attended the experiments and may have participated in preparing them, even though the French official account denies this, and there are no documents confirming this.

After this first experiment, three other experiments were conducted in the following months, which were also called "Al-Yaraabi".

Despite the absolute success of the experiment, France was at that stage still behind the major powers such as the United States, the Soviet Union and Britain.

France was racing against time before the signing of the Treaty on the Limitation of Nuclear Tests, and Algeria's independence gestures threatened the continuation of the French nuclear program.

In light of these data, de Gaulle worked to accelerate the pace of the program, especially since 1961, when in November the first underground nuclear test was conducted in the Ain Akkar area south of Reggane.

Between that date and February 1966, 13 nuclear tests were carried out.

France admitted four experiments in the Reggan region in the state of Bechar and 13 in Ain Akkar in the Tamanrasset state in southern Algeria, but the researcher and professor of nuclear physics and chemistry at the University of Oran, Kazem Al-Aboudi (author of the book "Rabi` Reggan") reported that France had conducted 57 nuclear tests in Algeria, and that the zero Between one bombing and another, its distance was less than 150 km, which made the atmosphere saturated with nuclear radiation.

despite the independence of Algeria and repeated denunciations of experiments by the Algerian interim government, the Evian Accords - which were signed between Algeria and France after negotiations between 1960 and 1962 - included secret clauses that allow France to continue to exploit nuclear sites for periods ranging from five years (Reggan) to twenty years. (The missile base in Colomb-Bashar).

France continued its nuclear tests and research until mid-1966, after which it transferred the components of the nuclear program to the French islands in the Atlantic and the Pacific.

, the French nuclear tests damaged the environment and humans in southern Algeria, and birth defects appeared on a large scale in the Algerian Sahara regions that witnessed the tests.

But the French authorities played down the popular and even political reaction, by promoting the myth of the clean bomb by French intelligence that convinced even the French experts, technicians and soldiers who worked in the test sites.

The magazine "El Geish" (published by the Algerian Ministry of Defense) said in 2010 that 150 Algerians were used as test rats in the first bombing, as they were hung on pillars in the vicinity of the experiment to study the effect of radiation on humans.

According to the French researcher, specializing in nuclear testing, Brino Barrillo

In the context, the "Mujahideen Organization" (veterans) - in a statement issued on the occasion of the 52nd anniversary of the first French nuclear test in Algeria - estimated the number of victims of the French nuclear tests in the country at more than thirty thousand, and the organization called on France to compensate the victims and their families.

France did not take the initiative to clean the region from nuclear radiation, whose damages remain for thousands of years, according to Al-Aboudi, who told Al-Jazeera Net that "the French experiments in Algeria used uranium, whose traces remain 24,400 years, and plutonium, whose effects lasts 4.5 billion years, was used."

In the context, a confidential French report stated that Paris deliberately exposed its soldiers to the radiation of nuclear tests in Algeria to find out their effects on humans.

According to the report - which was obtained by the French News Agency from unnamed military officials and dates back to 1998 - France sent soldiers to sites where experiments are being conducted in the Algerian desert between 1960 and 1966 to study "the physical and psychological effects of the atomic weapon on humans."

In an experiment conducted in 1961, a force on foot, some in trucks, advanced to a distance of a few hundred meters from the center of the bombing, less than an hour after it happened.

The report said that the soldiers were given 45 minutes to dig combat posts in the radioactive desert soil, and they had nothing to protect them except military slippers, hats, gloves and simple face masks.

The report added that the army said at the time, "It appears from the results that the fighter is physically able to continue fighting even at a distance of 800 meters from point zero and outside the fallen area (the falling nuclear dust)."

The expansion of radiation

after the "blue jerboa" experiment, the French Ministry of Defense published a map that defines the area of ​​radioactive contamination in a narrow area of ​​the Algerian Sahara, and upon publishing the real maps - after they were removed from the Department of Defense Secrets - in 2013 it was found that the nuclear dust reached large parts of the Sahel region of Africa As far as West and Central Africa, radiation reached Senegal, Chad, Central Africa and Mauritania after four days of testing, while Mali arrived less than 24 hours after the bombing.

Despite this, the movement to denounce these experiences remained limited to the popular side and a number of interested associations, while the official position remained fluctuating between ignorance and indifference.

In the context of Algerian moves to prosecute France over its nuclear experiments, the Algerian League for the Defense of Human Rights (independent) wrote to the United Nations Human Rights Council, in order to bring the French authorities to trial in all international bodies and in the European Union.

According to what Hawari Kaddour was in charge of this file revealed - in statements to Anadolu Agency in mid-February 2017 - that the Algerian League wrote to the United Nations Human Rights Council to look into these crimes, and also asked Algerians in Europe to help them in finding lawyers in international law. To file a lawsuit before an office of the High Commissioner for Human Rights in the European Union, as well as in the local courts in Switzerland that have jurisdiction in pursuing crimes of an international character.