The story left by the late Sergeant Byeon Hee-soo... 'I want to know it', the reality of LGBTQ people

SBS'I want to know it' illuminates the reality facing sexual minorities. Discrimination suffered by former Sergeant Byeon Hee-soo, who was forcibly discharged from the military for having undergone sex change surgery while serving under the subtitle of ``To You-The story left by former Sergeant Byun Hee-soo,'' which will be broadcast on the 3rd. Learn about and hate. 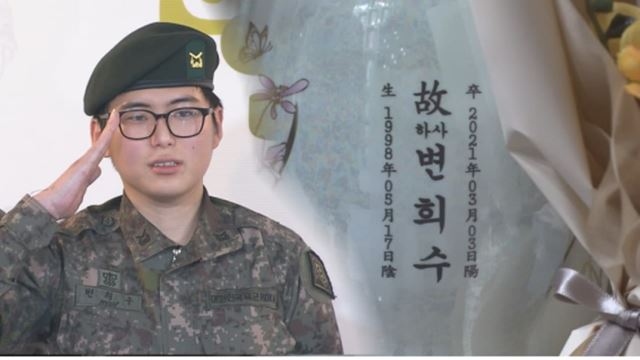 Sergeant Byun Hee-soo, who had undergone sex change surgery for the first time in the history of the Korean military, was found dead on the 3rd of last month.

It happened more than a year after being forced out of the military.

In February of last year, former Sergeant Byun Hee-soo filed a personnel petition at the Army headquarters to re-evaluate the military's decision after being dismissed.

Opinions were raised that ``it is an individual's selfish greed to continue to serve as a female military service after undergoing surgery at will,'' and, ``Even if you return to the female military, other women or soldiers may be uncomfortable, so you should respect the military's decision.''

Conversely, those who favored reinstatement supported Sergeant Byeon, saying,'All LGBTQ people should be able to carry out their duties and missions in an environment that is not discriminated against.'

Most people know that a transgender named Byun Hee-soo suddenly appeared and scattered the military.

The production crew of'I want to know' met colleagues and old friends who had lived in the military with Sergeant Byun in a difficult way after a search.

They told a story about Byun, which is contrary to what has been known to the public.

Sergeant Byun Hee-soo filed an administrative suit to cancel the disposition of the forced discharge, but at the age of 24, he was unable to endure the frustration of being abandoned by the military, the disgusting gaze he received after coming out, and the uncertain future after the forced discharge. Left.

The person who gave up their dreams or gave up their lives in the face of discrimination and hatred was not just the story of Byun Hee-soo.

In fact, according to a 2017 survey, transgender people's suicidal thoughts were up to 19 times higher than the general population, and suicide attempts were more than 10 times higher.

The crew of'I want to know' wanted to know the real reason why it was harder for them to live than dying, and after a long persuasion, they met 20 sexual minorities who had been brave enough to hear their voices without going through anything.

Sergeant Byun Hee-soo, who was forcibly dismissed from the military for undergoing sex change surgery during his service, will deeply examine the discrimination and hatred that Sergeant Byun Hee-soo suffered, and will focus on the reality of sexual minorities with various gender identities and sexual orientations. Is aired at 11:10 pm on the 3rd.