China News Service, April 2nd. The first Taiwan-network interactive national style youth creative program "Let's go live!" The sixth issue of Huacai Youth was broadcast, and Zhou Shen's opening song "Painted Silk" surprised the audience.   In this issue, the first group co-creation was over, and 18 teenagers successfully went online. In addition, the teenagers who had not been successfully onli 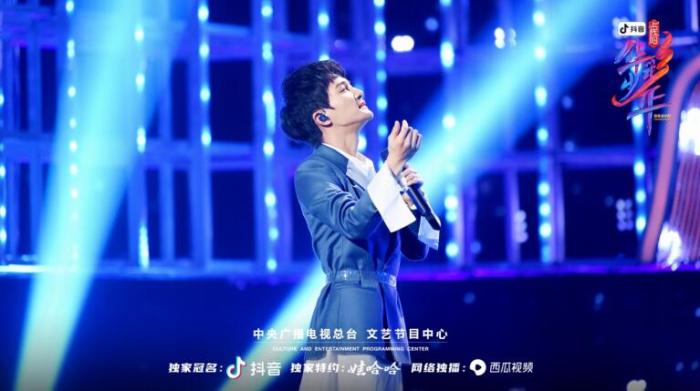 In this issue, the first group co-creation was over, and 18 teenagers successfully went online.

In addition, the teenagers who had not been successfully online before also received the "Guofeng Youth Growth Plan Training Course" in the program, and returned to the stage with a new attitude, fighting for the last two online places in the additional test session.

In the sixth inaugural stage "Starting at Seven o'clock", the youngsters of the "Happy Family" team went deep into the "Weather Forecast" studio to visit and feel the reality. The host Yang Dan taught and experienced on-site personally, from the appearance From the posture to the creative direction, it inspires the creative inspiration of the teenagers.

The four teenagers play four young wanderers who are struggling outside, showing the warm and sincere emotions between the wanderers and their families in the form of a musical.

When the two familiar melodies of "News Network" and "Weather Forecast" sounded, the teenagers said their hearts and bounds with their hometown and relatives, and the live line officers and teenagers were all moved with it.

Huang Zitao recalled the past with his father and burst into tears on the stage. Through the works, the teenagers also pondered and reflected more deeply on the relationship between themselves and their families.

Behind the blooming of "Hua Cai", hard work and constant frustration are indispensable. For example, the four teenagers in the sixth issue of "The Heroes" group tried to sing and dance for the first time. Give full play to the courage of the man's pride and fearlessness.

But in the end, the lack of experience did not achieve considerable results.

The teenagers shed tears on the stage, but stubbornly wiped away their tears, saying, "We will get better and better, and we will definitely improve more and more, so that every time everyone sees us, it is a new breakthrough."

In the additional test session of the off-line teenagers, the teenagers showed off their unique skills and brought wonderful performances to the audience.

Ye Qingqing's classical dance "Elegance, Rong and Elegant Rhyme" shows the beauty of "Slim Lady"; Yuan Shuai combined with a fan "Free Crane" interprets all the free and easy ambitions; Fang Jing combines dance with drums and performs a handsome interpretation of " Magnolia Blossoms; Zhong Ying made great progress after the guidance of Teacher Lan Tianyang, and sang a song "Lighthouse" with affection; Sanna sang "The Flame of Heart"; Huang Zihongfan sang "Heart", arousing the collective of the teenagers on the scene Practicing the voice; Bai Yuhao's "Wukong" showed the stubbornness of Monkey King in the early stage and the unruly image in the later stage, and was praised by the online officials.

Image courtesy of the program group

In the sixth phase, the "Growth Plan Training Class" is launched, and the program invites professional teachers in vocal music and dance to give professional tutoring to the teenagers one-on-one.

For the youngsters who are not online, the program team invited the popular vocal instructor Lan Tianyang to guide each teenager's situation, including emotions, sound range and other details, and the dance class invited the "Dance Queen" Chinese Dancers Association Mr. Shan Chong, the vice chairman, provided training on stage interaction, eye contact and other professional knowledge with a sense of space.

It is reported that "Let's go online!

"Hua Cai Boys" will be broadcast on the CCTV-1 integrated channel and other Friday prime time, CCTV-3 variety channel on Saturday, CCTV-11 Xiqu channel on Sunday.