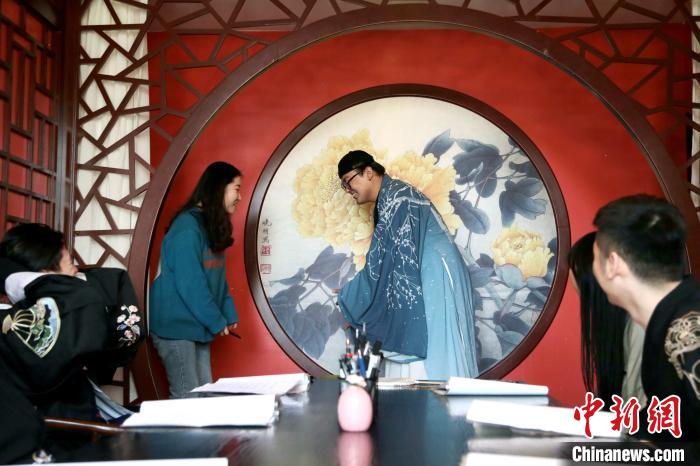 "Allowing players to enjoy the fun of the game while savoring the various forms of life is the charm of'Script Killing'." Liu Minghao, who runs the "Script Killing" store in Xi'an, said frankly.

Script Killing, as an offline party social game that integrates role-playing and logical reasoning, has recently been favored by young people.

In a few hours of game time, players sometimes acted as "the great man" and sometimes incarnate as the "monster detective". The "love and hatred" between different characters is the main reason that "script killing" continues to attract players. .

The picture shows the "Script Kill" player in Xi'an.

After several years of hard work, he has opened two offline stores of "Script Killing" in Xi'an.

It is Liu Minghao's daily job to "jump" in different scripts every day to introduce the story background to the players and guide the progress of the game.

In recent years, the "script-killing" market has developed rapidly. Relying on the large number of college students and other young consumer groups, there are now hundreds of "script-killing" offline stores in Xi'an.

In their free time, playing a game of "script killing" with three or five friends has become the norm for offline social networking among local young people.

The picture shows Liu Minghao, a practitioner of "Script Killing" in Xi'an, reading the script.

Public data shows that in 2020, there will be more than 3,100 new companies engaged in "scenario killing" in China, an increase of 63% year-on-year, and the industry is developing rapidly.

Wang Yinghua, who works for an IT company in Xi'an, is a standard "head-down family". He said that long-term "soaking" on the Internet is not beneficial to physical and mental health, and "script killing" is a "unplugged" game method. For it, it is not only a relaxation of the body and mind, but also can meet the needs of social interaction.

In a shop in the south of Xi'an, Liu Minghao and several players put on ancient costumes, and amidst the melodious guqin sound, they began to explore an unsolved case hundreds of years ago.

Liu Minghao said that it is difficult for the player to be immersed in the "script killing" by relying on the text script alone, and it also requires scene construction and the guidance of the host.

Each script, the host has to "exhaust", through multiple exercises and changes to make it more vivid.

"When there are novice players to play, I will be responsible for leading them into the play. For example, the script they choose is a happy theme, I will create a happy atmosphere, and then lead the players to advance the story, better To help players immerse themselves in their roles, to experience different stories and different lives." As a host of "Script Kill", Xi'an "post-90s" Qiqi told reporters.

Wang Xiaoyong, an expert from the Shaanxi Academy of Social Sciences, believes that modern urban life is fast-paced and stressful in the workplace, and the emergence of game methods such as board game bars, escape rooms, and "script killing" have allowed young people to release pressure and shift focus while entertaining , To a certain extent, to achieve psychological relief, at the same time, it also provides a fresh social experience for young people.

"In order to give players a better gaming experience, I often read the script until two or three in the morning, although tired, but tired and happy." Qiqi said with a smile.