5 data support mothers of the Emirates

Today, the UAE celebrates “International Mother’s Day”, which falls on March 21st every year, in honor of the role of mothers in society, a role that combines caring for the family and raising a generation capable of taking responsibility for the nation, and continuing the achievements and achievements of fathers and grandparents. Country 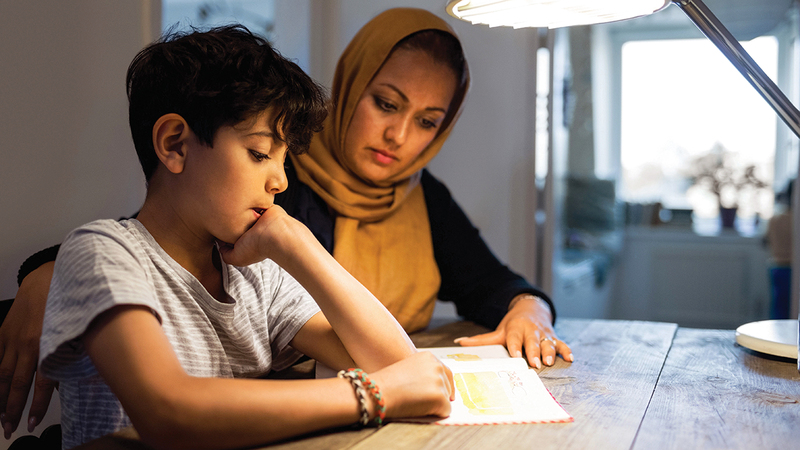 5 data support mothers of the Emirates

The UAE provides the appropriate environment for the mother to play her role in caring for her family.

Today, the UAE celebrates “International Mother’s Day”, which falls on March 21 of each year, in honor of the role of mothers in society, a role that combines caring for the family and raising a generation capable of bearing the responsibility of the homeland, and continuing the achievements and achievements of fathers and grandparents.

Therefore, the state is keen to take care of the mother and her child, so that women in the Emirates have rights and constituents that guarantee them to play their role as mothers and an active element in society, an approach founded by the late Sheikh Zayed bin Sultan Al Nahyan, may God rest his soul, and expressed in many sayings that he praised With regard to the mother and her role in society, including: “Mothers and children are the basis of society. If the mother and child are correct, the rest of the community will be reconciled.”

Her Highness Sheikha Fatima bint Mubarak, President of the General Women's Union, Chair of the Supreme Council for Motherhood and Childhood, and Supreme Chairwoman of the Family Development Foundation "Mother of the Nation", presented a unique model for a mother who realizes the importance of this role, and is proud to undertake it alongside the great efforts made by Her Highness, with the support of From Sheikh Zayed, during the march of community development and women's empowerment, which makes her a role model and a role model for all girls and mothers in society.

The UAE has been keen to provide an appropriate environment for the mother to play her role in caring for her family and children, and to provide support that provides her with safety, stability and a sense of justice, as well as preserves her dignity and facilitates her mission, and has made great efforts in the field of motherhood and childhood care, health care and creating an advanced social, cultural and educational system for all Society members, especially women and children, and it is difficult to quantify the rights and privileges the state provided for motherhood and childhood, but in this context, we pause here before five data that contributed to the support and care of the mother.

The UAE established the Supreme Council for Motherhood and Childhood in 2003, with the aim of improving the level of care, care and follow-up for motherhood and childhood affairs and providing support for this in all fields, especially educational, cultural, health, social, psychological and educational, achieving the safety and security of the child and the mother, and following up and evaluating development and development plans to achieve the desired well-being, while encouraging studies and research Disseminating the comprehensive cultures of childhood and motherhood.

The UAE launched the National Strategy for Motherhood and Childhood and the strategic plan to promote the rights and development of children with disabilities 2017-2021, with the aim of helping the mother and her children to move towards progress, obtaining rights and exercising them in various fields of life, unifying and coordinating various efforts in the country to protect childhood and care for children with disabilities and provide all capabilities. And the means to take care of them and preserve their rights, in addition to empowering these groups in society to be an active element in the future, just like other groups.

The UAE has provided legislation that guarantees women to work and continue their work during the period and after childbirth, and has also achieved equality in work and wages, indicating the state’s belief in the effectiveness of the role of women in informing society.

Among the most prominent of these legislations is childbirth permits in the country that are regulated by Article (53) of Federal Law No. (11) of 2008. According to this article, permanent female employees in the UAE federal government are granted maternity leave with a total salary for a period of three months. Four months from the date of her return to work leaving the workplace for two hours a day to breastfeed her newborn, and these hours are counted from the paid working hours.

The law also stipulated that the employee who has a live birth shall be granted a paid paternity leave for a period of three working days during the first month of the birth of his child, on the condition that the birth takes place within the country.

Among the legislations that help women achieve a balance between caring for work and at the same time caring for her newborn and being assured of his presence in a secured environment, Cabinet Resolution No. (19) for the year 2006, which stipulates that ministries and other government institutions, which employ more than 50 employees Establishing nurseries in its headquarters for the children of female employees.

This decision aims to increase the productivity of working women, limit resignations, support the motherhood role, and family stability in the country.

The field of health care for mothers and children has been the focus of the state from the beginning, and it has worked to develop an organization that keeps pace with the latest scientific findings in this field, beginning with medical examination for those who are about to get married, then providing periodic follow-up to the pregnant woman, to ensure her safety, the safety of the fetus and its normal development, and provide services Childbirth, breastfeeding awareness, in addition to the national program for early detection of breast tumors, the early detection program for cervical tumors, the osteoporosis screening program, and others.

Celebrating Mother’s Day comes this year and the Corona pandemic continues to cast its shadow over the world, and on the way to celebrate this event, which is dear to everyone’s hearts, as many families have dispensed with the rituals of celebration and gathering around mothers, especially the elderly, out of fear for them and in implementation of precautionary measures. These gatherings met with digital encounters through the means of communication and video calls, which also led to a decline in the demand for buying traditional gifts, and other gifts appeared suitable for the current situation, such as sets that include disinfectants, gloves and masks of different shapes and designs, especially masks that bear the name of the mother or a design that expresses Its place is in the hearts of its children.

• It is difficult to quantify the benefits provided by the state for motherhood and childhood.

• The field of maternal and child health care is at the forefront of the country's attention from the start.