Guide: This is how the voting goes in the Melodifestivalen final

Jury groups, viewer votes and what really happens if two entries get the same number of points? SVT Nyheter's Melodifestival reporters Helin Pakdemir and Andreas Söderlund guide how the voting goes in the Melodifestivalen final. 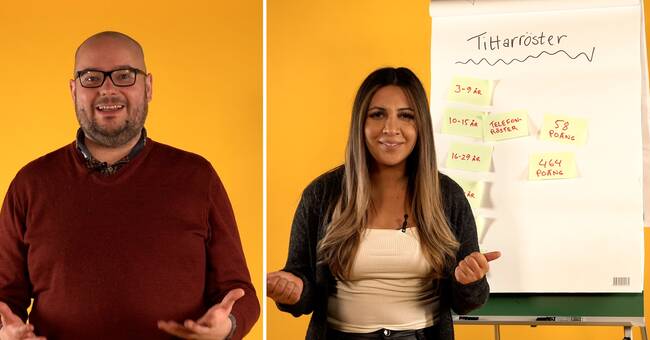 How are the points distributed?

A total of 928 points will be awarded to the artists during the final.

The international jury groups and the viewers hand out 464 points each.

However, it is not the total number of votes that decides.

The international jury is divided into eight groups based on countries.

What is perhaps less well known is that the viewers' votes are also converted into points and divided into eight different groups.

How are viewers' votes converted into points?

The viewer votes are divided into seven different groups based on the age of the app voters plus a group that consists of all telephone voices.

The contribution that those who are 3-9 years old give more votes for thus gets 12 points from that viewing group.

The contribution that receives the second most votes from that group receives 10 points and so on.

And so there it continues in group after group until a total of all points have been awarded.

In the program, however, we do not get this reported.

There we only get to see the total amount of points that viewers give to contribution after contribution.

Who sits on the international jury?

The countries that have jury groups this year are: Albania, Great Britain, Cyprus, France, Iceland, Israel, the Netherlands and Switzerland.

Even earlier this week, it looked like a jury group from Belarus would be involved, but after criticism of the Melodifestival production, that jury group was replaced by a jury from Great Britain.

How are the points presented in the program?

During Saturday's final, we will see the jury groups' points awarded by jury group after jury group.

Points 1-7 appear automatically on the TV screen and points 8, 10 and 12 are read out by a representative of the jury.

After that, the viewers get to vote for about five more minutes before it is time to present what the viewers think.

The viewer votes are awarded in lump sums with the total amount of points to each of the artists.

Finally, the viewer score is given to the contribution that received the most points by the jury groups.

All to make the points distribution as exciting as possible on the TV couch.

What happens if two artists get the same number of points?

Should two artists receive exactly the same number of points, it is the contribution that has received the most votes from the viewers that wins.

It is unlikely that the viewers' votes would be exactly evenly distributed.

Last year, there was only one point difference between Dotter and The Mamas.

But in terms of viewership, it was just as exciting.

The Mamas received a total of 120,750 viewer votes more than Dotter.