The number nine temperature calendar tells you what are the characteristics of this winter, will it still be cold after nine?

The news from China Weather Network is over, and the cold is all over. Yesterday (March 11) was the last day of "Nine to Nine". Looking back on this winter’s "Number of Nine", except for the temperature of 2939 below normal, the rest is generally warmer, and this year is colder and warmer. Early. China Weather.com has launched the "Number Nine" temperature calendar. Let's take a look at the feat 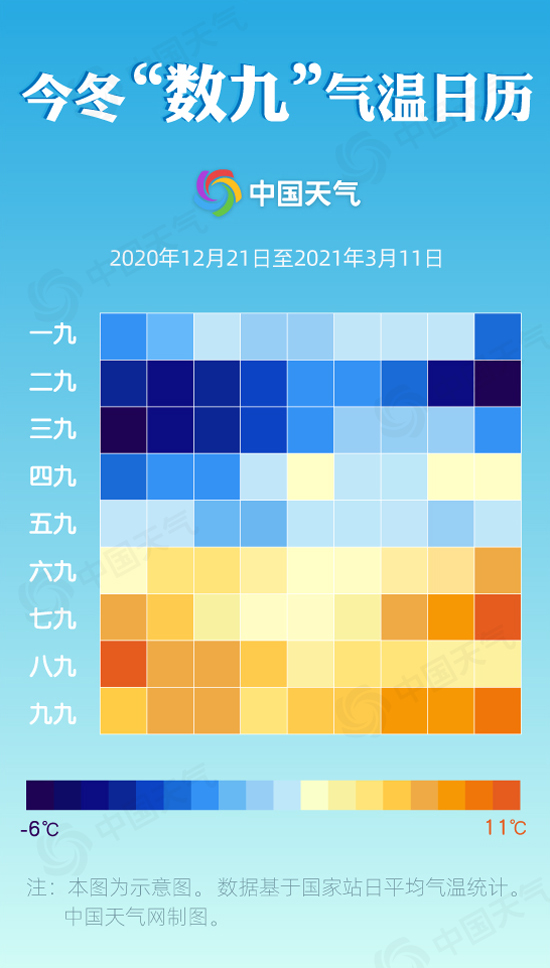 The news from China Weather Network is over, and the cold is all over.

Yesterday (March 11) was the last day of "Nine to Nine". Looking back on this winter’s "Number of Nine", except for the temperature of 2939 below normal, the rest is generally warmer, and this year is colder and warmer. Early.

China Weather.com has launched the "Number Nine" temperature calendar. Let's take a look at the features of Number Nine this winter.

This winter, extreme cold and warm events are frequent

In the nineteenth of this winter, extreme cold and warm events have occurred frequently, and temperature fluctuations have also been significant. Except for the temperature in 2939, which is lower than normal, the rest are generally warmer.

According to analysis by Hu Xiao, chief meteorological analyst of China Weather, the coldest is usually at 3,949, but at the end of 19th and 29th this year, the second and 9th are colder than the usual 3,949, and then the 4th and 9th began to warm up earlier. , And continue to be warmer.

On the day of the winter solstice, clear temperatures rose mainly in most areas of the country, and the temperature was slightly higher than normal in the same period of the year.

Twenty-nine is colder than the perennial three-nine-forty-nine.

The temperature in Sanjiu is slightly lower overall.

During the March 9th period, the national average temperature was -5.4°C, which was 0.2°C lower than usual.

Three days after 1989, it was warm to a record-breaking time.

In the last three days of July 9th, the temperature was extremely abnormal, and about a quarter of the stations set or tied the highest temperature record in February.

Eighty-nine is the fifth warmest in history.

In terms of spatial distribution, Heilongjiang is colder, and other provinces, regions, and cities are basically warmer. Tibet is the warmest in the local area, Qinghai is the second warmest in the same period, and Zhejiang and Shanghai are the third warmest.

From the perspective of time distribution, the beginning of 1989 was unusually warm. After that, the cold air was active, and the temperature fluctuated and dropped and tended to be normal.

The temperature fluctuates greatly in 1999.

During the nine-nines period, the north was mostly warmer on average, but the temperature fluctuated frequently, with fluctuating cold and warm temperatures. In the south, the temperature was slightly lower in Guizhou, Guangxi, Hunan, and Jiangxi due to more rain.

After the count of nine, the cold air frequently disrupted the pace of spring in the country

After the count of nine, my country's cold air still frequently caused temperature fluctuations, and the spring process was slow.

Especially in the south, due to the overcast and rainy endurance, the temperature in some areas may be slightly lower, such as parts of Sichuan and Guizhou, which had already entered the spring, but due to the frequent cooling of the cold air, they were "beaten back" to the winter.

At the same time, most parts of northern my country are still in winter.

March is the largest month of spring. Nanling to southern North China enters spring in March all the year round.

Judging from the situation this year, the temperature in February was abnormally high, and many areas of Huanghuai, Jianghuai and Jiangnan entered spring earlier.

At present, the pace of spring has reached the middle and lower reaches of the Yangtze River, and the summer has taken the lead in Hainan, and has quietly penetrated into the Yuanjiang Valley of Yunnan and southern Taiwan.

Looking forward to mid-to-late March, the weather in most parts of my country will start to warm up, but the temperature fluctuations are still large, and the possibility of a cold spring is not ruled out.

However, "Nine End Peach Blossoms", the spring flowers are in front of us, let us look forward to the arrival of spring together.