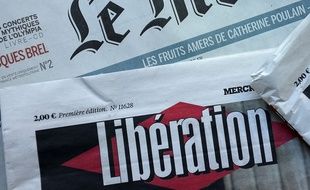 The newspaper "Liberation" published a letter from a rapist on Monday, March 8, 2021. -

decided to publish this Monday on a double page a letter entitled “I violated.

We violate ”, preceded by an article titled“ Why “Libé” publishes the letter of a rapist ”.

In this letter, Samuel, a 20-year-old student, admits having raped his ex-girlfriend, Alma, the student behind a wave of free speech at Sciences-Po Bordeaux.

The daily has chosen to devote part of its front page to this subject, on the occasion of International Women's Rights Day.

An editorial choice that has been strongly criticized on social networks by feminists.

The daily presents this letter as "a strong and disturbing text" which puts forward a "reflection which aims to challenge us" and "to get us out of our comfort zone", and salutes "the intellectual force, the ardor of this text. ".

“The author describes with precision the personal, cultural and social determinants which participated in the commission of his act.

He does not justify himself, does not self-flag, does not discard, he explains.

And to explain is not to excuse ”, details

about its editorial choice.

"Giving a voice to a rapist to explain rape in all its" complexity "is SHAME!

», Indignant on Twitter the feminist association and activist Dare feminism.

"If the rapists feel the need to testify, they can do so at the police station"

, describing the rapist's choice to address his letter to a newspaper as "pure manipulative crap".

"It will work on a lot of men who were just waiting for this kind of cloth," she continues.

The author does not "describe the determinisms with precision", he manipulates us.

He relieves himself by saying that basically everyone is a bit of a rapist, a bit of guilt.

that it is his relationship with his girlfriend that created the conditions for the rape, he says - oh well, malignantly - that she is also responsible for it.

And you validated that, published that.

"He uses the fact of having been raped himself, of being socialized as a man, of having had a passionate relationship to free himself from guilt," she still analyzes.

"Why does he choose to publish a letter in your newspaper rather than go and surrender to the police?"

This choice does not question you?

: “Think about your responsibility to publish a text of such misogyny.

"If the rapists feel the need to testify, they can do so at the police station", abounds a user.

"Everything is contempt, indecency and violence"

"This newspaper has a serious problem", abounds Caroline de Hass, quoting the thread of Valerie Rey-Robert.

And to add: "Everything is contempt, indecency and violence in these

", denouncing the use of the expression "comfort zone" to speak of rape.

An editorial choice "incomprehensible and disgusting" for the designer Pénélope Bagieu.

"You choose March 8 to give voice to a rapist?"

In addition with an extremely dubious iconography?

», Takes offense to the newsletter and feminist magazine

Women who do stuff

“This idea that my attacker has the right to tell our story and my violence disgusts me.

I feel dirty because of you,

Alma was made aware of the publication of this text, while she is "today hospitalized for depression", and indicates in the columns of

she "will file a complaint when she is ready".

“Alma is from Bordeaux.

I don't know if she reads us, but I would like her to know that we believe her and that we are in solidarity with her, ”concludes Pauline Comrade.

Apple addresses the little girls to be born on March 8: "Be proud of what you are, because by being, you change the world"

Students, caregivers, cashiers ... The heroines and victims of the health crisis in the spotlight of the feminist mobilization on March 8