Fazza Diving Championship ... an Emirati engineer who innovates and a champion returns

The contract for the finalists of the 15th edition of the Fazza Championship for free diving "Al-Hiyari", organized by the Hamdan Bin Mohammed Center for the Revival of Heritage at the Hamdan Sports Complex in Dubai, was completed after the qualifying rounds took place the day before yesterday, amid the remarkable participation of various nationalities, especially citizens, as well as a hero 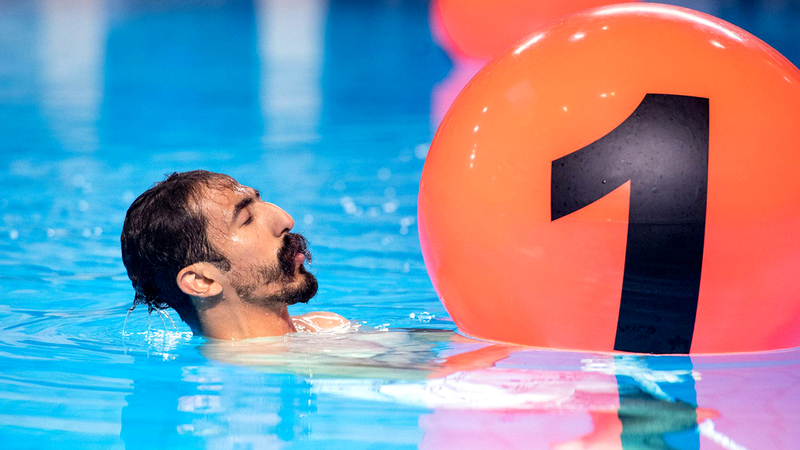 Fazza Diving Championship ... an Emirati engineer who innovates and a champion returns

The contract for the finalists of the 15th edition of the Fazza Championship for free diving "Al-Hiyari", organized by the Hamdan Bin Mohammed Center for the Revival of Heritage at the Hamdan Sports Complex in Dubai, was completed after the qualifying rounds took place the day before yesterday, amid the remarkable participation of various nationalities, especially citizens, as well as Champion of a number of previous editions, Serbian Branko Petrovic.

The qualifiers witnessed the registration of time numbers that reflected the keenness of divers to continue training despite the circumstances of the Coronavirus pandemic, while international stars who were keen to come to Dubai despite the travel restrictions imposed by most countries were remarkable, given the importance and reputation of the Emirati heritage championship, which has firmly established itself. On all levels.

Today, the finals are organized for the open category and the Gulf category, and in the junior category, in which the age of participation was raised from 13 years, in line with the instructions to preserve the health and safety of everyone, as the top 10 figures in the qualifiers of each category qualified to the finals.

Among the participants was the young citizen Abdullah Al-Hussam, who works as a civil engineer, loves diving, and who had previously implemented an unprecedented idea that entered the national records records, when the flagpole of the state was installed underwater during the celebrations of the National Day in 2013.

Al-Hussam said: “I participate for the second time in this championship, and despite the Corona pandemic, those who love diving find the ability and time to continue their training and strive to excel in this heritage sport that we are proud of, as it is linked to our heritage and customs for hundreds of years.”

He added, “I work as a civil engineer, but I love the sea and diving, and I am proud to be the first to implement the first self-propelled flagpole in the underwater world, which is a number registered in the Emirates Encyclopedia of National Standard Achievements, as I combined my engineering experience with my attachment to the sport of diving, and since then Diving became a passion for me, and I became attached to it more ».

For his part, the Serbian champion Branco Petrovic returns to the arena with great ambitions this season, after 10 years of participating in the Fazza Championships for free diving (Al-Hiyari), winning the title several times, and registering new numbers in the tournament, and despite losing the title in past years, only He is still aspiring to reclaim the title.

Branko Petrovic said: “I am now residing in the UAE, despite the challenges posed by the Corona pandemic, but I was keen on training in the past period, and I aspire to win the championship title this year.”

The championship succeeded in attracting the rising generation through the influx of many young divers, including Khaled Omar (15 years old) and Muhammad Karam (13 years old), who participate for the third time in the championship competitions, and strive every year to provide the best performance, and try to be in the top 10 list .

The two youngsters considered that their love for swimming attracted them to experience free diving out of love to learn about this heritage sport, and to try to learn its skills in the long term, expressing their thanks to the organizing committee for the establishment of this type of tournament.

The competitions are witnessing Gulf participation, specifically from the Sultanate of Oman, as there are Abdullah Ali and Adel Khamis, who generally love the sea with its various types of water sports, with their free diving experience, as they strive to achieve the best possible result on the personal level in the first place before contemplating the competition, especially since this sport It gives the individual the opportunity to challenge a different and exciting self, combining skill and patience.

The chairman of the organizing committee of the tournament, Hamad Al-Rahumi, described the wide participation from various countries of the world and from the countries of the Gulf Cooperation Council, in addition to the local participation, as a very positive thing in the current circumstances, in addition to the good numbers that have been achieved, with expectations that these times will rise in the finals .

He said: “We have implemented all precautionary measures, from isolating the participants, separating their resting places before and after doing the dive, while confirming that everyone will have swabs to detect the Corona virus, and we expect more competition in the finals, taking into account that the preparations went out of habit, But desire and will have made us offer them the best capabilities for the success of their experience ».

International stars were keen to come to Dubai despite travel restrictions in several countries to participate in the championship.

- The tournament has succeeded tremendously in attracting the younger generation through the influx of many young divers.