"Knights of Palestine" ... 130 girls challenge the siege of their wheelchairs

Energetically and actively, young Wissam Al-Dalu, 25, puts on her wheelchair, which is a haven for the movement she lost since childhood, while she was in the Saad Sayel gym in the west of Gaza City, to start her daily career in practicing basketball, after completing a training session that lasted two hours 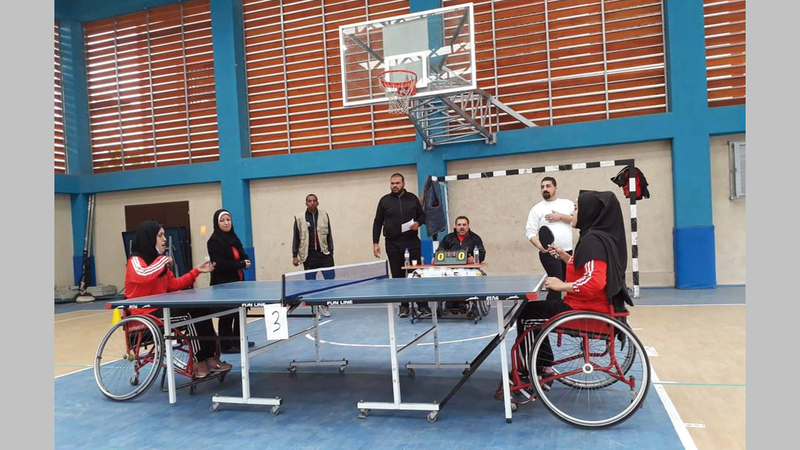 A club in Gaza for women of determination

"Knights of Palestine" ... 130 girls challenge the siege of their wheelchairs

Energetically and actively, the young woman, Wissam Al-Dalu, 25, puts on her wheelchair, which is a haven for the movement that she lost since childhood, while she was in the Saad Sayel gym in western Gaza City, to start her daily career in practicing basketball.

After completing a training session that lasted for two continuous hours, the young woman Wissam took a rest, accompanying her friend Mayser Al-Dabba, to start the training of the volleyball team from the top of their wheelchair, in the same place, along with their colleagues who share the same disability and the same will.

The two young women, Maysar and Wissam, participate in the ranks of the Palestinian Knights Club for Women of People of Determination in the Gaza Strip, in which the number of participants is 130 women and girls. They defeated the siege of their wheelchairs and rose up in the face of harsh societal theories, to achieve their ambitions and prove the worthiness of their will.

Sawsan Al-Khalili, who suffers from a slight mobility disability and short stature, was the first perseverance of the initiative in the idea of ​​establishing the Palestine Knights Club for Women of People of Determination, which unified their will and gathered their ambitions, within one unified sporting body, to overcome their multiple disabilities between amputations as a result of Israeli wars, and accidents They were afflicted with childhood, or a handicap that stuck with them from birth.

"Emirates Today" met the president of the Palestine Jockey Club, Sawsan al-Khalili, in the Saad Sayel gym, at a time when members of the women's team began their daily training. She says, "The Palestine Knights Club is the first at the level of the governorates of the homeland, devoted to sports for women with disabilities. The idea of ​​establishing it came from the premise that sport is a guaranteed right for all, and women with disabilities in the Gaza Strip have the right to play their favorite sport and realize all their dreams.

She added that the implementation of the idea of ​​the Palestine Jockey Club took place after the support and encouragement of a group of women of determination, in order to show the capabilities of their talents to the whole world, and to advocate for their rights in sports and social terms in all fields and aspects.

The long journey, extending since 2015, has been a guarantor of mastering the Palestinian riders in various sports fields, and forming a group of different teams within one body, which enabled them to participate in sports competitions on the local Palestinian level, and to win many honorable titles and championships.

The author of the idea of ​​the women's club explains that the origin of the goal of establishing the club is to integrate girls of determination socially and psychologically, and to advocate for their rights in athletic, artistic, professional and cultural terms, adding, “We organize a range of sports activities and tournaments suitable for young women of determination, in addition to specialized sports services. For them, to overcome all social problems that obstruct their creativity, and to eliminate all forms of discrimination in society.

The president of the Palestine Knights Club says, “We got a group of local championships, the last of which was the Cup, which is the highest tournament, and we won the Wheelchair Basketball Cup in 2018, and in 2019 we got the Rachel Corrie Basketball Championship, and the team also got the first places in the tournaments. Women stand, sit, as well as top ranks in the cross-country marathon.

Breaking the barrier of disability

The Palestine Knights Club has made great achievements at the local level, but due to the nature of its formation in the besieged sector, it faces difficult challenges, like the rest of the Palestinian society, according to Al Khalili.

"Our team has great, boundless young ambitions, but at the same time its capabilities are few, due to the conditions of the blockade, and we need multi-domain advocacy to advance the sport of people of determination and the women of the Palestine Knights Club," Al-Khalili said.

Al-Khalili and the Palestinian women with special needs aspire to represent the State of Palestine in the world, through their participation in international competitions.

long journey since 2015 has been a guarantor of mastering the riders of Palestine in various sports fields.