Under the orange light of the Intercontinental Hotel, barely a kilometer from Genoa's headquarters, from side to side of the table, glide the future of the Royal House, the ... 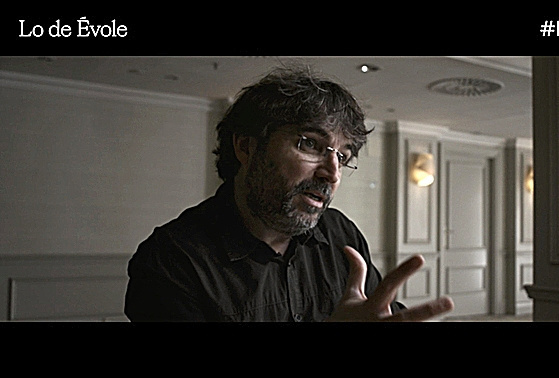 Under the orange light of the

, barely a kilometer from Genoa's headquarters, from side to side of the table, glide the future of the Royal House, the state of the Spanish center-right, the management of March 11 ... On the right, José María Aznar answers.

On the left, Jordi Évole asks.

The debut of the former Prime Minister in

, 25 years after arriving in Moncloa.

The first program of the new season of

The story of the first times.

He has been chasing Aznar since the beginning.

Because he is a key character in our recent history due to his influence before and after being president.

It is a shadow that is still very present in Spanish politics.

And why at this time?

Because we remember that March 3 will be 25 years since you won an election and that made you especially excited.

Does the current context of the center-right not influence?

The current situation is not bad, but I would be lying if I said that we do the interview for that.

It began to negotiate in September and we did not imagine that we were going to find this moment, it has been pure chance.

He had never sat in La Sexta.

In an in-depth interview it is his first time.

As he told me, he gave me the interview because perseverance must be rewarded.

That is part of the rectitude that dominates Aznar's behavior.

It begins to be difficult to see politicians sit down with journalists with little affinity.

They lavish little in general and tend to go to related media.

The problem is that the media are increasingly related to a type of ideology, more linear, and that is not good.

Is the problem with the media or with the politicians who address their audience?

The mix would be much better, it would enrich us more, but this moment of absolute polarization does not admit shades or grays.

Qualifying an opinion is not commercial, we prefer a radical and positioned opinion.

The other day a colleague said that now we want the press to reaffirm us.

It is not something very new and it is going to get more, the media and the people are increasingly more

It is very marked on which side is each gathering, each newspaper or each radio.

although I know that many people are going to say why we took him out.

Well, precisely because it can give a point of view that we do not hear much in

Is your program also ideologically marked?

We cannot give up an editorial line, but that cannot cut you off with certain guests or certain topics.

That Aznar is with us is great because he goes to a program that is not related to him and lets him talk.

I begin the interview by telling him that we voted for different parties, we are from different teams and we like different potatoes, but his presence is a great joy.

It is difficult for me to interview someone I appreciate because an interview to have some interest must have uncomfortable questions and with a friend you cut yourself.

With Pau Donés it was not bad for him.

That interview had little to do with finding a headline or looking for information that they may be hiding from you, it is a self-help interview so that we can stay with a series of lessons.

And that of Messi?

You cannot ask Messi for the responsibility that you ask of a politician or a great businessman.

Although you can squeeze him in something, he is a guy who plays soccer and I was interested in reaching the person behind the best in history.

And that is why he was asked about his behavior with the Treasury, but beyond that ...

He insists a lot that it would have been a failure to end up badly with Aznar.

Did you fear it?

It would have been the most predictable, but it didn't motivate me at all.

There were tense parts, but the important thing was that he explained himself and be able to ask him without breaking the rope and say I get up and go.

Is Esperanza Aguirre's then a failure?

His uprising is almost comical, it is not the anger of an interviewee saying go to hell or that question is intolerable.

(...) We have had several characters who have left the program and, although they were television moments, we have not told them because I was not interested in that point of tension and aggressiveness. Who? If I did not broadcast them, why am I going to say now.

What was the tense point with Aznar?

The informative management of 11-M because there are many moments that are questioned if your Government told us the whole truth.

Did you stop so that it would not break?

You don't need a doggy interview to get answers.

It does not coincide then that the lack of aggressive questions is to whitewash the guests.

We are very wrong about whitening, we have sanctified the controversy and the culture of zasca that it seems that if there is not, there is no chicha.

In a calm conversation we can also get the attention of the spectators, it does not take permanent tension to attract them.

We have fallen into the trap that if there is no tension, they do not pay attention to you.

For a while my show had that aggressive stamp, but now I don't want that.

You can't be twitching all day.

Would that stage change?

No, everything is an evolution and specific moments.

As programs we lived a very angry stage like 15-M and we were as pissed off as the people who occupy the seats.

When you were facing certain political leaders, you were going with one more point of rage, the situation was that, but now I want to uncheck myself.

Was it easier to express that anger with a center-right government like that of Rajoy?

We started in the Zapatero government and there was the most rabid moment of the program.

Continuing with anger, what is the right point at which tension breaks out in this country?

The current tension is more unsustainable in the media than in society.

There is less tension in the street than in the social gatherings.

, they don't really hurt each other, it's a role.

We have given ourselves a series of institutions to which we owe respect and we must take care of, but we must also improve them even though there are people who understand that as a delegitimization .

Who is responsible for that process?

Those who have used it wrong, especially from within.

It is much more anti-system who has been corrupted within an institution than who is from outside.

Do you consider certain parties more anti-system than the social movements from which they are born?

A party in general, no, but members without a doubt.

They all have individuals whose behavior has delegitimized the institutions.

Now that all the living presidents have sat down, what interview do you keep?

because we gave the example that two people who think very differently can dialogue politely.

If our rulers had opted more for this option, we would not have reached the point we do.

That is the argument that is considered equidistant.

What are we going to do to it?

Is Spain a full democracy?

(...) We like the head of full democracy better than saying that things can be improved.

Is the same thing happening with the protests in the case of Pablo Hasél?

It is very good to mobilize for freedom of expression because no one should be taken to jail for a few letters, but at the same time we turn people who are not into symbols.

This is how 'Libertad' will be, the series and film by Enrique Urbizu that will premiere in Movistar and in theaters on March 26

Special Valentine's Day Ayuso and Almeida, golden singles: "Dating someone of another ideology? It depends on dogmatism";