"Humanity's Journey" starts in Dubai with 17,000 square feet of art

"The Journey of Humanity" is the title of the giant art painting that was unveiled at the Atlantis Hotel Dubai yesterday, completed by Sasha Jefri, and with an area of ​​17,000 square feet, it won the title of the largest canvas art in the world in the Guinness Book of World Records. Party 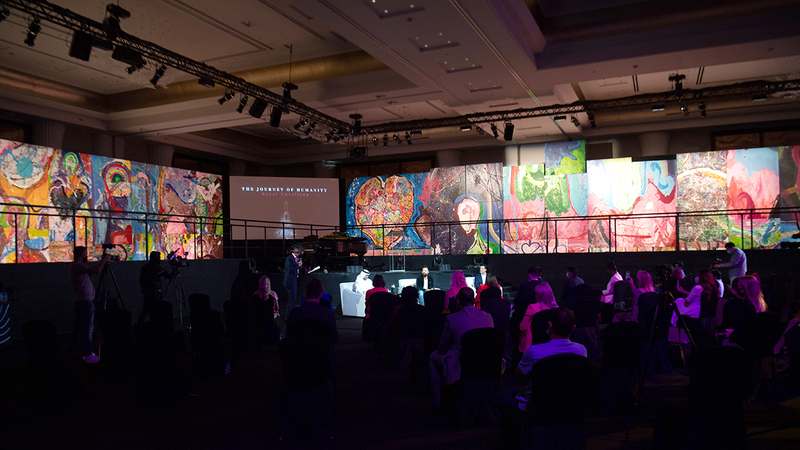 "Humanity's Journey" starts in Dubai with 17,000 square feet of art

"The Journey of Humanity" is the title of the giant art painting that was unveiled at the Atlantis Hotel Dubai yesterday, completed by Sasha Jefri, with an area of ​​17,000 square feet, which won the title of the largest painting on canvas in the world in the Guinness Book of World Records.

The unveiling ceremony of the painting was held in the presence of Sheikh Nahyan bin Mubarak Al Nahyan, Minister of Tolerance and Coexistence, and CEO of Dubai Cares, Dr. Tariq Muhammad Al Gurg, in an area specially equipped to collect parts and details of the artwork that amounted to 70 pieces of art that will be put up for sale at auction charitable.

The Dubai-based British artist, Sasha Jefri, who is considered one of the symbols of humanitarian work, spent 28 continuous weeks working in the hall of the Atlantis Resort, The Palm, from March to September 2020, during the closure period imposed by the Corona pandemic, an average of 20 hours of work The daily.

The British artist worked on the inspiration of the painting from drawings submitted to the initiative, by children from all over the world, as they presented their drawings, pictures, posters and designs, all of which were inspiring to Jeffery, as his painting dealt with many topics, including isolation and communication.

The "Humanitarian Journey" painting has reached more than 2.5 billion people around the world, and is part of the "Inspiring Humanitarian" Jafri initiative, which was launched under the patronage of Sheikh Nahyan bin Mubarak Al Nahyan, Minister of Tolerance and Coexistence, in partnership with "Dubai Cares" And Atlantis The Palm.

Jefri said to Emirates Today: “I did not plan to work. I started with it without thinking about the final result. I took inspiration from children from more than 140 countries around the world. I did not expect to continue working with the same momentum and level of inspiration throughout that period. The topic grows and grows, and the plan was not to create the largest painting in the world.

He added, "All that I was striving to achieve from work was to invent some change in the world and demonstrate love and humanity through art, but it turned into a beautiful and interesting work."

The journey that Jeffrey took at work was full of challenges, and he indicated that he had been working 20 hours for eight months, and his work was on the ground, which affected his health, so he suffered disc pain in the back, as well as ankle sprains, noting that his work bears many challenges each A day, every three hours he suffers from fatigue, and getting out of bed in the morning is one of the most difficult stages.

And about dividing the work into 70 paintings, Jeffrey said: “Cutting them was a very difficult and emotional matter, as it is like destroying a beautiful work, but in reality, with cutting, it became a process of transforming into something beautiful as well, and that took about seven days, so cutting it is a process that requires trust in the universe. And what it offers us of beautiful things, it is practical means that it is not possible to return to the original form at all, and that its assembly as a puzzle is not an available thing.

And he considered that cutting it is considered a lesson in art, for here the painting is transformed into a painting in another spirit, and therefore giving the work the right attention and true feelings enables the artist to transform it into a work of greatness.

Jafri said that presenting humanity is very important, as it raises humanity, and this is important, because art is primarily human, indicating that presenting this work under "Corona" was a clear message that the future, in the next stage, is not technology but humanity.

Dr. Tariq Al-Gurg confirmed to Emirates Today that the idea began in January 2020, that is, before the beginning of the stone, pointing out that the completion of the work went through many difficult stages, including those related to stone, but there was an insistence on the part of everyone to accomplish it and reach « UNICEF, explaining that most of the challenges that return to the stage are the stone and the circumstances of "Corona", and knowing the timing by which the pandemic will end, so there was fear about announcing the project, as the biggest concern was that the project did not take the echo it deserved.

He pointed out that the proceeds from the auction will return to education, stressing that education is not only a school and a book, as everything that helps the child to study is included in education, including sports, music and art, and for this they work to attract students to learning by supporting all kinds of arts and linking them to education.

The CEO and General Manager of Atlantis The Palm, Take Kelly, said during the press conference held yesterday morning on this occasion: “Reuniting parts of this wonderful artwork in the same place that witnessed its implementation is a very special and influential moment for us all, it was proud. We have the British artist's solutions as our guest, and Jeffrey will remain a friend of the hotel. We will not bid him farewell after finishing work. ”

The "Covid-19" pandemic has caused one of the largest crises in the history of the education sector, which has cast a shadow over the process of children's learning and development at an unprecedented level, as the closure of schools in order to limit the spread of the virus has led to an increase in reliance on online learning.

Nevertheless, according to the International Telecommunication Union (ITU), 360 million young people do not have access to the Internet.

The Journey of Humanity aims to collect more than 110 million dirhams (30 million US dollars) during live auctions that will be held during the next year, so that Dubai Cares will allocate the funds that will be collected by it to the initiative's partners, UNICEF and UNESCO. And "Global Gift" and "Dubai Cares", to support its humanitarian initiatives that address challenges related to children's access to communication and learning opportunities, in addition to health care and health facilities.

One week of continuous work.

A piece of art for sale at a charity auction.

One billion people viewed the board.

An hour of daily work.