Weekend in Cerdanya, the idyllic region of the Pyrenees

In the idyllic Pyrenean region of Cerdaña, the Masella and La Molina resorts form an inescapable tandem for ski enthusiasts. Although not only from the tables lives this corner 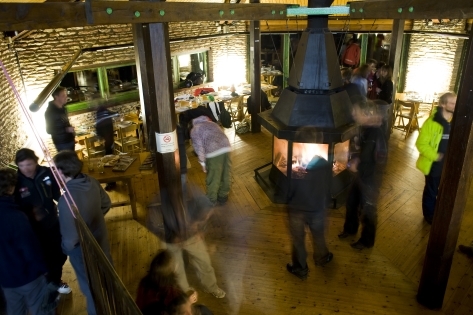 In the idyllic Pyrenean region of Cerdaña, the Masella and La Molina resorts form an inescapable tandem for ski enthusiasts.

Although this corner of Girona lives not only from the tables.

What's more, with the ascent of the last lift of the day the adventure starts.

At that time, around 5 in the afternoon, when the quiet begins to take over La Molina, the

Even to ascend at these hours almost at night it is not necessary to be an expert, as long as you accompany an experienced guide.

To begin with, the most important thing is not to miss that last cable car that reaches 2,300 meters.

The goal is to reach the

that rises majestically over the historic region watered by the Segre River.

But it is not just for the love of art or, in this case, the mountains.

Or for the love of sports, that too.

This ascent has a reward: a dinner around the great chimney of

, open all year round on this emblematic peak of the Eastern Pyrenees.

The interior of the refuge in La Molina.

During the excursion, the guide shows how to move forward safely, without sinking and getting traction both up and down.

With the sunset, the blanket of snow changes color while listening, like any soundtrack,

the crunching of snowshoes

Upon reaching the Eagle's Nest, the round of alpine panoramic views begins: Cerdaña, Bergadá, Ripollés ... half of Catalonia is in sight.

"We are in the highest guarded refuge in the Pyrenees", explain those responsible for the station.

For dinner, a recommendation: the local version of

... without fear of gorging yourself because you still have to do more exercise to descend to the base of La Molina, already with the light from the headlights.

Alternatively, you can stay overnight in the refuge and ski down the next day.

And there is always the option of taking the day excursion, with which you can get on and off in the gondola that the station opened last season.

The ski lift is also used as one of the steps between La Molina and Masella.

In total, 145 kilometers of wide slopes and good visibility to satisfy all levels.

With each turn, the skier discovers a new image of Cerdanya.

Of course, to get a complete idea of ​​this valley, one of the widest in Europe, the best thing is to fly over it in a hot air balloon.

It is already a classic in these parts because the beauty of the landscape is stunning.

The only downside is that you have to get up early.

Blame the wind for it.

The sail waits at the Alp airfield.

The Camins de Vent rider, Xavi Aguilera, is the cicerone.

can see massifs such as Pedraforca and, again, La Tosa ... At the mercy of the wind, the balloon travels for about an hour and a half passing through placid meadows where animals graze and seeing villages of tale, from Meranges to

, the capital of the region.

Further on is Llívia, crossing the border twice.

Since the seventeenth century it has been a Spanish enclave on French territory.

But do not blame this on the wind, but on the Treaty of the Pyrenees that painted the current borders.

By AVE to Gerona or Barcelona and from there by car (2h).

At the Hotel Solineu, La Molina.

Alpine and functional in Alp, about 200 meters from the La Molina ski lifts.

Dinner, sleep and breakfast, from 44 euros.

On the website of the La Molina station and in the Tourism of Costa Brava-Pirineu de Girona: www.pirineugirona.org