China News Service, Xi'an, February 10 (Reporter Mei Yilong) The ancient architecture embodies the wisdom and aesthetics of the ancients, deposits the mark of history, and exudes unique charm. As a result, it also "infected" You Song, a young man from Xi'an. In the past few years, he traveled to ancient buildings in Shaanxi, Shanxi, Gansu and other places to conduct research. Now, this has becom 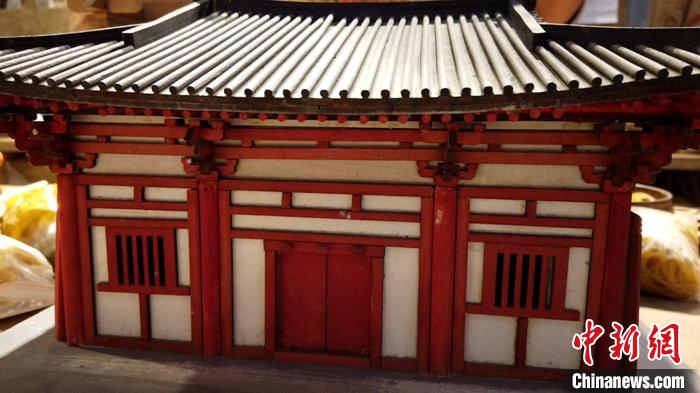 As a result, it also "infected" You Song, a young man from Xi'an. In the past few years, he traveled to ancient buildings in Shaanxi, Shanxi, Gansu and other places to conduct research.

Now, this has become a part of his life and work.

37-year-old You Song was originally a professional tourism practitioner with his own travel agency and stable income, but he was not satisfied with it.

Because he liked to study the craftsmanship of carpenters since he was a child, coupled with his interest in ancient architecture, in 2019, You Song "transformed" and set up a studio, began to study ancient buildings and their craftsmanship, and used carpenter skills to restore their structures.

During the research process, You Song also opened a "Lecture Hall" to share the results with everyone.

The picture shows the ancient building model made by You Song.

The majestically standing ancient buildings have been made and reduced in proportion to become a handicraft within reach.

However, the production process is relatively complicated, and the whole process adopts the mortise and tenon structure through the steps of composition, cutting, and polishing. The construction period is different according to the complexity of the building structure.

Up to now, You Song has produced more than a hundred models of ancient buildings in the Tang, Song, and Qing dynasties.

At the same time, You Song is also working hard on wooden cultural and creative products, boldly innovating and making some novel toys to attract the attention of young people, and by letting young people participate in the production of wooden handicrafts, they expand their knowledge of ancient architectural craftsmanship.

The reporter saw in You Song's studio that ancient architectural models were placed on the table, and the details were marked with structural names.

The indoor walls are covered with wooden toys, each of which is playable.

You Song, who is making toys on the side, seems particularly attentive, which also reflects his excellence in his works.

"According to market demand and continuous exploration, we have made some small dolls that can walk back and forth on the slope without power, and restored ancient Chinese siege devices, Zhuge Lianbow, wooden cow horse, and some toy guns powered by rubber bands. "You Song said that making these works can arouse the interest of children, feel the joy of handicrafts during the production process, extend the sense of experience, and better convey the spirit of traditional Chinese craftsmen.

The epidemic "disrupted" the pace of life of many people, and Yusong is no exception. You Song said that there are now fewer opportunities to go out to study on the ground, but it does not mean that you will continue to conduct ancient architectural research through the Internet and other methods, and use the "cloud" to tell the public about ancient architectural craftsmanship, so that more People feel the charm of ancient buildings. (Finish)