What cosmetics did ancient Chinese men use? Archaeologists have a great discovery...

The love of beauty is not only common in everyone, but also in ancient times.   An archaeological study recently completed by a team of Chinese scientists-a comprehensive analysis of the residue in a miniature copper pot unearthed from a tomb of a male nobleman in the Spring and Autumn Period in Shaanxi, and found that the residue was made of tallow as a matrix mixed with calcium carbonate mono 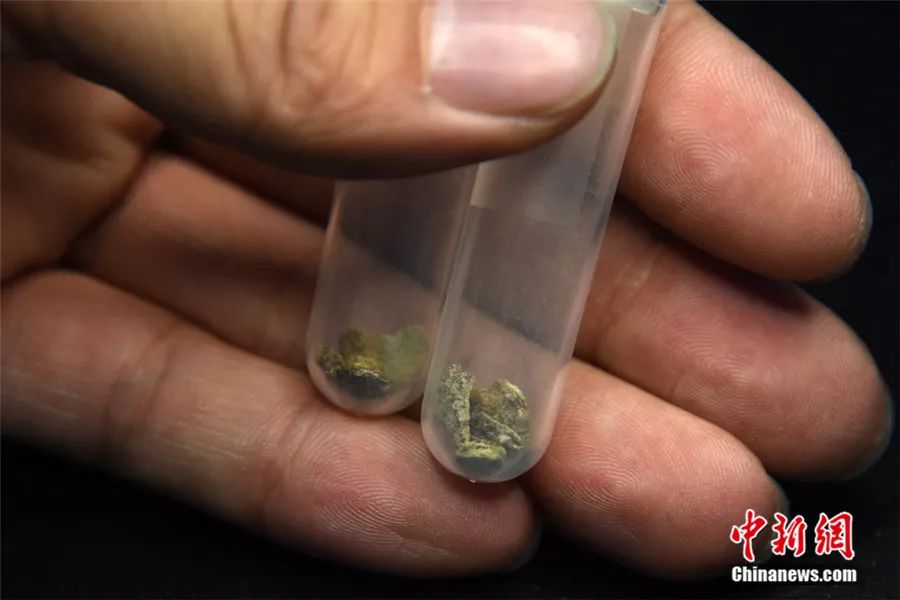 The love of beauty is not only common in everyone, but also in ancient times.

An archaeological study recently completed by a team of Chinese scientists-a comprehensive analysis of the residue in a miniature copper pot unearthed from a tomb of a male nobleman in the Spring and Autumn Period in Shaanxi, and found that the residue was made of tallow as a matrix mixed with calcium carbonate monohydrate particles. Whitening cosmetics.

This is not only the earliest men's cosmetics in China so far, but also the earliest known facial cream in China, bringing the history of making facial creams by Chinese ancestors more than 1,000 years earlier.

Archaeological discovery of the earliest research samples of male cosmetics in China so far.

In 2017, a miniature copper pot was unearthed from a male nobleman's tomb at the Chunqiu Ruiguo site in Liujiawa, Chengcheng County, Weinan City, Shaanxi Province. The remains of about 6 grams of remains in the pot are quite eye-catching.

Professor Yang Yimin’s research group from the Department of Archaeology and Anthropology, University of Chinese Academy of Sciences (National University of Science and Technology), recently worked with Shaanxi Provincial Institute of Archaeology Researcher Jianrong Zhong, Associate Researcher Sun Zhanwei, Institute of Vertebrate Paleontology and Paleoanthropology, Chinese Academy of Sciences, Peking University, The German Max Planck Society Institute of Human History Science and others have cooperated to use a series of modern advanced technology to complete a comprehensive analysis of the residues in the miniature copper tanks. The research results papers were recently published online in the international professional journal Archaeometry.

Professor Yang Yimin was interviewed and introduced the significance of the archaeological discovery of China's earliest male cosmetics and the follow-up research plan.

According to the first author of the paper and Dr. Han Bin from National University of Science and Technology, the residue contains organic and inorganic components.

The results of infrared spectroscopy, X-ray diffraction, and electron microscopy-energy spectrum analysis show that the inorganic component is mainly calcium carbonate monohydrate; the oxygen isotope analysis of carbonate shows that it comes from a freshwater environment; infrared spectroscopy and GC/MS analysis show that the organic component is animal Fats, fatty acid monomer carbon isotope analysis proves that the fats are derived from ruminant body fat.

This ruminant feeds a large amount of carbon 4 (C4) food (may be by-products such as millet and millet straw), which leads to a positive shift of single carbon isotope. Combined with animal feeding strategies, it is speculated that it is likely to be a captive cattle, that is, its fat is Tallow.

The results of the study show that the residue in the miniature copper tank is made of ruminant body fat (tallow) mixed with monohydrate calcium carbonate particles. It is a whitening cosmetic and the earliest male cosmetics found in China.

He pointed out that the archaeological work of the Liujiawa site has always adhered to multidisciplinary research, integrating scientific and technological archaeology more closely into field archaeology, and using scientific and technological means to excavate and extract the rich information contained in archaeological materials in order to restore and understand more historical features. The unearthed results of the analysis of the residues in the miniature copper tanks are a successful case.

Similar to the distribution of miniature copper pots at the Liujiawa site in the Spring and Autumn Period.

The history of making pasta in China is more than 1,000 years ahead of schedule

Han Bin said that calcium carbonate monohydrate used in cosmetics production unearthed at the Liujiawa site is a relatively rare mineral, which is more common in the special stalactites in lake deposits and cave deposits-moon milk stone.

In terms of making cosmetics, lake deposits have more impurities, while cave deposits are easy to obtain pure products. Therefore, the calcium carbonate monohydrate in the formula should be obtained when the primitive Taoists or alchemists collected stalactites in caves before Qin Dynasty.

This has also become the earliest evidence of the use of cave minerals in cosmetics during the pre-Qin period.

He said that although animal fat is used as a substrate to produce ointments and cosmetics in Pre-Qin documents such as "Han Feizi", "Book of Songs", and "Shan Hai Jing", although the description is simple, there is no archaeological verification before.

The first ancient document known to China to record the method of making face fat is the "Qi Min Yao Shu" during the Northern and Southern Dynasties, which clearly stated that "bovine marrow is used. If there is less bovine marrow, use tallow and it. If there is no marrow, you can also use empty fat." The combination of fat method.

GC-MS analysis and monomer isotope analysis results of the organic components of the residue in the miniature copper tank.

The discovery of a facial cream based on beef fat at the Liujiawa site indicates that the ancestors of Eastern Zhou Dynasty in China had already made and used facial cream based on fat, which was more than 1,000 years earlier than the record in Qi Min Yao Shu. Thus, the history of pasta making by Chinese ancestors was advanced by more than 1,000 years.

It is understood that beauty cosmetics based on oils are found all over the world.

For example, a box of Roman cosmetics from the 2nd century AD was unearthed in London, England, whose formula is ruminant fat + tin dioxide + starch.

The Liujiawa miniature copper pot has a diameter of 5.5 cm, a short diameter of 4.3 cm, a height of 5.9 cm, and a height of 7.5 cm. Several similar miniature bronzes were unearthed in the tombs of the nobles in the Spring and Autumn Period in Shaanxi, Shanxi, Henan, and Shandong. container.

Professor Li Ling from the Chinese Department of Peking University had previously discussed the use of such miniature bronze containers, and speculated that they were cosmetic containers.

Professor Yang Yimin, the corresponding author of the paper, said that the latest research conducted by the collaborative team through the scientific and technological analysis of Liujiawa miniature copper cans not only confirmed the relevant speculations, but also gained further understanding of the ingredients contained in the cosmetics:

First, the research found that the raw materials of the facial cream from the Liujiawa site were carefully prepared and processed. In the same period, the widespread distribution of miniature copper containers also reflected that the production of cosmetics had become an industrialized handicraft system at that time.

The use of cave minerals in cosmetics shows that the alchemists of the early Taoist school and the noble class may have a close connection at that time.

Electron microscope observation, infrared spectrum and X-ray diffraction spectrum of the residue in the miniature copper can.

Yang Yimin pointed out that in the history of China, it is known that there are more records of male makeup on the aristocratic class such as Cao Zhi and He Yan, the beautiful men of the Three Kingdoms period.

The latest research confirms that as early as the early spring and autumn, the social fashion of men's makeup existed in China. In addition to the beauty effect of men's whitening cosmetics, it was also related to the social environment of the great change at that time.

At the same time, the ancestors of Liujiawa used beef tallow in the production of beauty, facial cream and other handicrafts, which provided an important reference for the rise of the ancient Chinese cosmetics industry and the application of oils in the handicraft industry.

Yang Yimin said that the use of cosmetics has left a strong mark in the development history of human civilization. There are ancient cosmetics relics found all over the world. In several ancient civilizations, such as ancient Egypt and ancient Greece, the application of cosmetics has rich ancient records and records. The physical remains of archaeology.

Western scholars use modern technology to conduct in-depth analysis and research on the remains of ancient cosmetics in Egypt, Greece, and Rome. Through the production methods and ethnic analysis of the use of cosmetics, they understand the unique aesthetic tastes of the ancients, special religious rituals, animal and plant resources, and mineral resources. Utilization and development of handicraft technology.

In comparison, China, which has a splendid and glorious civilization for five thousand years, has now developed into a large country in the production and use of cosmetics, and is the second largest consumer market for cosmetics in the world. However, it currently lags far behind the West in the research of ancient cosmetics. The archaeological unearthed material and cultural remains of the pre-Qin period are inconsistent.

"The rise of the cosmetics industry is inseparable from the production of cosmetics and the widespread appearance of cosmetic containers." Yang Yimin said that he hopes that the academic community will use the cosmetics research results at the Liujiawa site as an opportunity to further pay attention to and strengthen the research on the remains of relevant container residues unearthed from archaeological sites. The analysis will fill more gaps in the research on the origin and early development of the cosmetics industry in ancient China.

He revealed that in a tomb of high-level noble women in Shanxi during the Spring and Autumn Period, several miniature copper boxes were also unearthed recently. "The technical analysis of the residues in them will further enrich our knowledge of the use of cosmetics in the pre-Qin period."