Emirati photographer Salem Sarhan (27 years old) won the award of the "Moments" contest launched by "National Geographic Abu Dhabi", under the slogan "Moments 2020, a year we lived differently." National Geographic announced the winning photo in the competition during a virtual event in the presence of a member of the jury 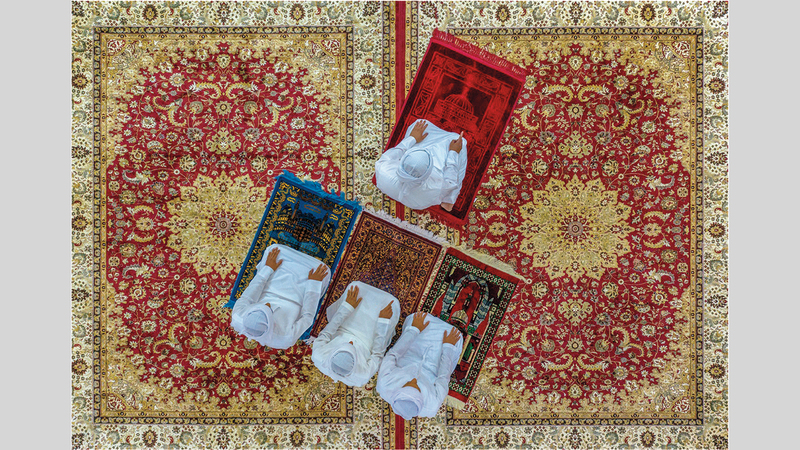 Prayers at home documented after mosques were closed due to Corona

Emirati photographer Salem Sarhan (27 years) was awarded the "Moments" competition, launched by National Geographic Abu Dhabi, under the slogan "Moments 2020 is a year we lived differently."

"National Geographic" announced the winning photo in the competition during a virtual event, in the presence of the member of the jury, the two-time Pulitzer Prize-winning National Geographic photographer, Muhammad Muhaisen, and the head of corporate communication and public relations at Almarai Company, Abdullah Nasser Al-Otaibi.

The winning image embodies his family members performing the ritual prayer at home after the mosques were closed due to the pandemic, and it shows the reverence of the worshipers, and Salem and his brothers used to go to the mosque to perform the ritual prayer, and upon hearing the muezzin saying, “Pray in your homes,” Salem was inspired by the idea of ​​this picture.

Muhammad Muhaisen said: “I was drawn to this moment when his family picked up their prayers at their home due to the closure of mosques due to the pandemic.

It is a scene that shows how our lives have changed this year. ”

Salem obtained photographic equipment worth $ 10,000, as well as publishing his photo in the Arab National Geographic magazine.

And in second place, the photographer Ahmed Al-Azzam (29 years), from Jordan, came with his picture in which he captured the Jordanian calligrapher Muhammad Hindi, who has been practicing this profession since the fifties, and he is working completely alone and enjoying his profession, after the outbreak of the epidemic caused his workshop to be closed temporarily.

And in third place came the Palestinian Samar Abu Al-Auf, 36, who took the picture of the barber Sameh cutting the hair of relatives and neighbors in the middle of the street, while fully abiding by the precautionary measures.

The "Moments" competition was launched in its current version under the slogan "Moments of 2020, a year we lived differently", to document the exceptional circumstances and events witnessed by 2020 that led to the imposition of many life restrictions and challenges, which began to be gradually lifted after months of isolation.

"Moments 2020" provided the opportunity for photographers to tell their stories that document this period from their perspective and lenses, as each photo narrated a unique story from the heart of reality in the Arab world.