So far so close - A feminist walk in Paris: in search of women

History can be read on the street names, walls and monuments of our cities. This is what makes memory and heritage, what we discover while traveling. But in Paris, as elsewhere, it is clear ... 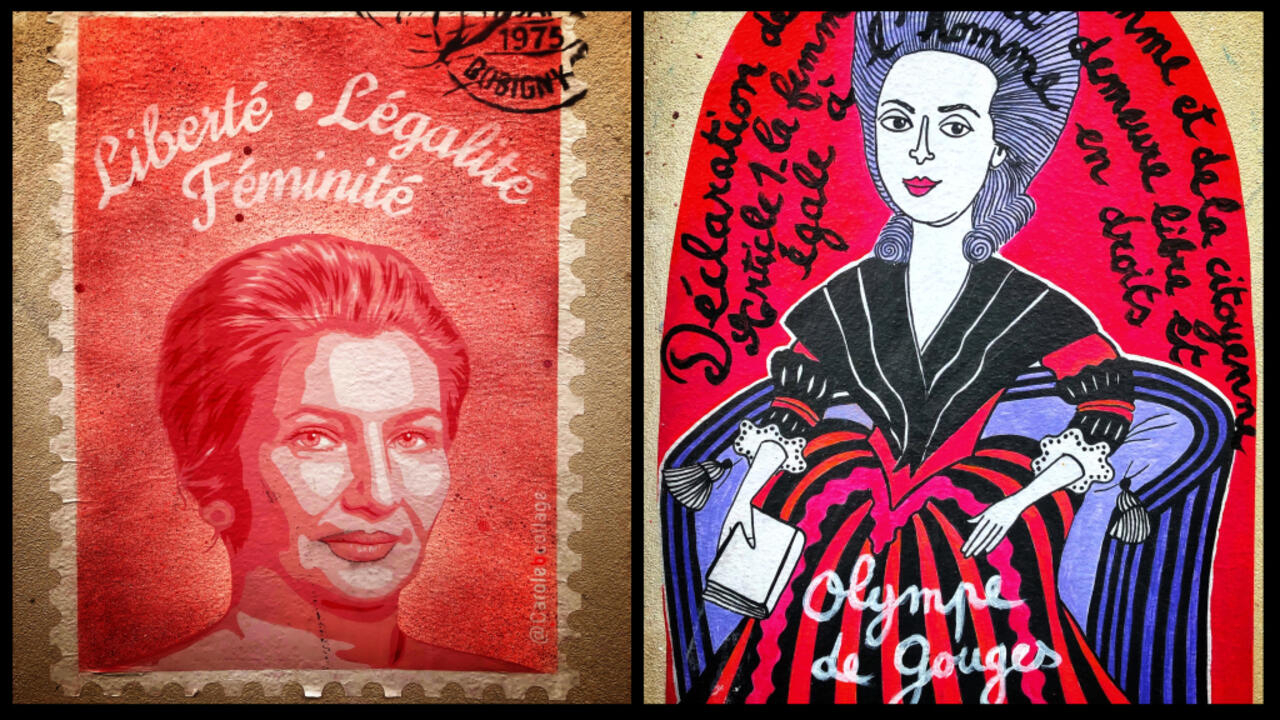 Feminist walk in Paris: in search of women

Collages on the walls of Paris of the politician Simone Veil and the feminist pioneer Olympe de Gouges, by the street artists Carole B and Me-Paris.

History can be read on the street names, walls and monuments of our cities.

This is what makes memory and heritage, what we discover while traveling.

Now in Paris, as elsewhere, it is clear that women are still largely absent from this open-air story.

It was while traveling that Charlotte Soulary, thirty-something adventurer and former spokesperson for the French association “Dare feminism”, made this observation.

Once back in Paris, she decided in 2018 to create a collaborative platform and a self-published

” which revisits Paris by putting women at the center.

Among them, we find Marie Laurencin, great little-known painter of the first part of the XXth century, Olympe de Gouges feminist pioneer of the French Revolution, Simone de Beauvoir author of the "Second sex", Marguerite Durand and Hubertine Auclert, two great French suffragettes who campaigned for the right to vote, finally won in a hard fight in France in 1944, or even Louise Michel, founding figure of the Paris Commune and feminist activist teacher.

To follow in the footsteps of these women, famous or anonymous, who made the capital, is often a game of treasure.

But at the end of the day, there is the promise of discovering inspiring, often unrecognized destinies.

Along the way, we also renew our gaze, by re-reading the history of France through that of feminist struggles that we teach little.

Finally, we question this so-called “invisibilization” phenomenon, which for a long time consisted of marginalizing or silencing in the public space, the experiences of women, their words or their contribution ...

If the mechanisms of invisibilization are complex, nestled between the collective unconscious, the self-censorship of women themselves and the evidence that history has especially allowed great men to emerge, the figures speak volumes.

In France, 2% of streets are named after women.

In Paris, we reach more than 10% after a recent effort by the municipality and under the impetus of militant feminist collectives.

The Panthéon only recently welcomed great women: Marie Curie in 1995, Germaine Tillion and Geneviève de Gaulle-Anthonioz in 2015 and Simone Veil in 2018. Before that, it was only as a wife that a woman there had been admitted.

Finally, out of 110 stations, the Paris metro has only 4 or even 6 that bear the name of a woman.

In eastern Paris, between Père Lachaise cemetery and Place de la République, follow us with Charlotte Soulary, for a feminist walk that gives momentum and makes travel rhyme with commitment.

feminism is not just a demand for justice, sometimes angry, nor such or such scandalous demonstration;

it is also the promise, or at least the hope, of a different world which could be better.

Special musical playlist Feminist walk in Paris: find HERE or LA the music of the show and other feminist songs

, a collaborative platform that places women at the heart of travel.

The paper guide to Paris, self-published, is for sale online on this site.

Hurry, there are few left in stock!

Guided tours are also offered from time to time.

the Violette and Co bookstore

, one of the very few feminist and LGBT (Lesbian, gay, bi and transsexual) bookstores in Paris or even France.

Located at 102 rue de Charonne, Paris 11th, this unmissable address was opened in 2004 by Catherine Florian and Christine Lemoine.

It is a landmark that also hosts exhibitions, writing workshops and residences.

located in the 13th arrondissement of Paris.

This place, the first official library of feminist documentation, concentrates invaluable archives of feminism in France, including more than 60,000 documents bequeathed by Marguerite Durand (1864-1936) founder of the feminist newspaper La Fronde and militant suffragette.

, a recent initiative carried by the association “Humans for Wome”, a lending library for works exclusively focused on questions of feminism, gender and the liberation of women's speech.

It is located in the Bastille district in Paris (see the site for timetables, operation and address).

Neither seen nor known.

Pantheon, history, memory: where are the women?

This choral work seeks to restore women to their place in history, through the story of the fate of 80 women who have worked in the sciences, the arts or even politics.

the interactive map of Parisian heritage

initiated by students from the Louvre school, which lists the female creations of Paris.

, launched by the City of Paris in 2018 to pay tribute to famous, forgotten or little-known women.

Cover of "The travel guide" which puts women at the center of the discovery of Paris.

Martine Storti "For a universal feminism" and Audrey Célestine "Lives of combat: black and free women"