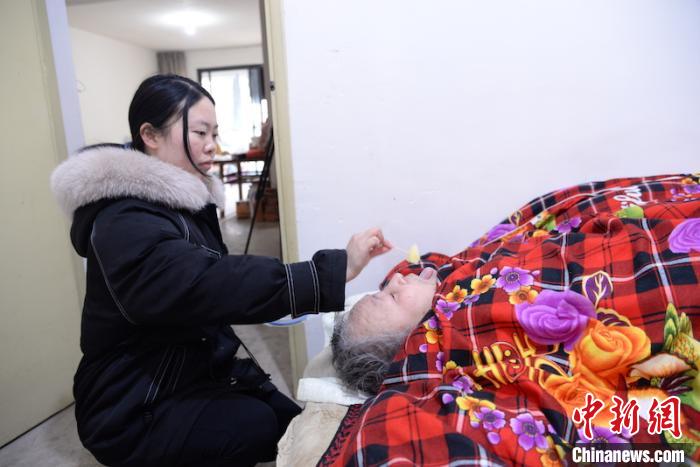 I have always lived with my father, great-grandmother, grandma, and little grandfather who cannot take care of themselves.

Her story is touching and admirable, and she has won honors such as "The Good Man in Sichuan" and has become a good example of filial piety and love for the elderly in everyone's eyes.

The four generations of Xiao Yan's family were in the same class, and they were supposed to be full of laughter, but they were full of misfortune due to illness and divorce.

"Nine months after I was born, my parents separated, and then my father went out to work. I lived with my great-grandmother, grandmother and grandfather. They brought me up." Xiao Yan said.

It is reported that Xiao Yan's great-grandmother was 96 years old before her death. She had limited mobility and was in poor health. She usually used an oxygen inhaler and took medicine every day; Xiao Yan's grandmother was 75 years old and was born with a disability and could not walk normally and could not take care of herself; The little grandfather is 70 years old this year. He is also born with a disability and cannot walk normally. He has never started a family and has been living with Xiao Yan's family. Now he cannot get out of bed.

Xiao Yan takes care of the elderly at home.

For a long time, in order to take good care of the elderly in the family, Xiao Yan and his father jointly assumed the obligation of filial piety and love for the elderly, but in July 2018, his father was diagnosed with advanced gastric cancer at the Second People's Hospital of Jintang County, which made it unfortunate. Families worsen the situation.

After the operation, the 45-year-old father's entire stomach, lower esophagus, and left liver were removed. He was unable to eat normally and could only rely on nutrient solutions to maintain his life.

In the most difficult time, after Xiao Yan went to the hospital every morning to take his father to inject the nutrient solution, she immediately went back to cook for the three elderly people at home, and then returned to the hospital to take care of her father. She had to go back and forth between home and the hospital four times a day.

Before that, Xiao Yan was a women's clothing shopping guide at Huaikou Store in Yishang Street. After his father became seriously ill, all the pressure and burden in the family could only be borne by Xiao Yan.

In order to take good care of her father and three elderly people, Xiao Yan resolutely quit her job and rushed to the hospital and family all day long.

In fact, this is the third time Xiao Yan has resigned, every time because of taking care of the elderly.

Xiao Yan said that after graduating from high school in 2016, she started working. “In the beginning, she worked in a shoe factory, and then she worked as a manicure and clothing shopping guide.” When her father was still alive, she worked outside to earn money. Three elderly people in the family Often sick, Xiao Yan resigned twice and returned home to take care of her.

"Sometimes I feel a little sorry for myself. I am only in my twenties. I have never seen the outside world. I stay at home all day. Compared with my friends, I feel very uncomfortable. But the situation of the elderly at home, I can't walk away at all." Xiao Yan said, looking at the two elderly people at home.

After the death of his father and great-grandmother, the family became more deserted. Xiao Yan, who was in his early 20s, even had no one to tell.

"Sometimes, in the dead of night, crying alone for a while, I have never cried in front of them, because now I am the pillar of the family, I cried, and their hearts are even more uncomfortable." Xiao Yan said.

As there is no work, the whole family can only rely on the remaining two elderly people to make a living with a monthly pension of more than 3,000 yuan.

Xiao Yan said: "Although the family is very tight, they cannot treat the two elderly people badly in terms of diet. The meat, vegetables, and fruits have not been cut off at home, and they can eat whatever they want."

Today, it is comforting that Xiao Yan has found the other half of her life.

"My husband was introduced by a relative. He is very good to me and the two elderly people who are paralyzed in bed at home. He will take care of them with me after get off work." Xiao Yan said: "I now put more energy on the two. I feel sorry for him, but he understands me very well.” Looking at the grandma and grandpa lying on the bed, Xiao Yan said firmly: “They raised me. Great, I also want to endorse them in retirement!" (End)