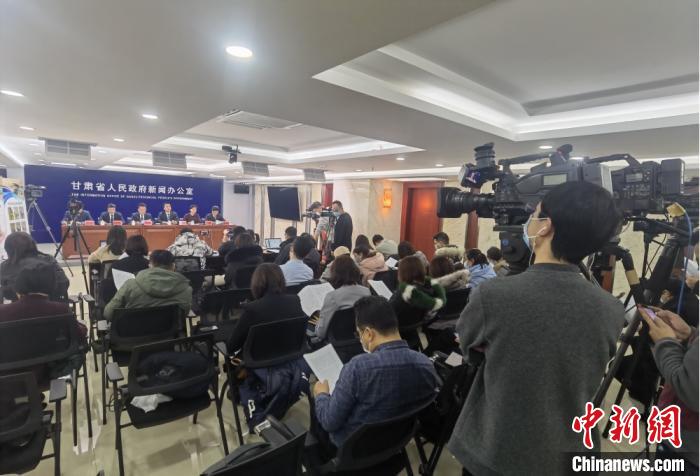 Guo Chunwang, deputy secretary-general of the Gansu Provincial Government, said that at present, the management of Yangguan Forest Farm is relatively extensive and there are weak links in daily work.

Dunhuang is mainly desert landform, its historical and cultural status is extremely important, and its ecological environment is extremely fragile.

Established in 1963, Yangguan Forest Farm is 70 kilometers away from the downtown area of ​​Dunhuang. It is connected to the Kumtag Desert in the northwest. It used to be almost barren. After several generations of Dunhuang people moved sand dunes, flat fields, and planted trees, it was deserted in the past. Become an oasis.

On January 26, Gansu officials notified Lanzhou of the "Investigation of the Destroyed Protection Forest in Yangguan Forest Farm in Dunhuang".

The picture shows the scene of the briefing.

Guo Chunwang said that the investigation team found that in 2007, Yangguan Forestry Farm leased 5,000 mu of forest land to three companies for operation.

The examination and approval procedures of forest land leased by forest farms are not standardized enough, and the contract text is not complete, especially after the lease management has not kept up, resulting in ineffective forest land renovation and tending during the lease period.

Guo Chunwang mentioned that Dunhuang Feitian Company, in particular, has affected the agricultural production and ecological irrigation water of the Yangguan Forest Farm located downstream in order to develop the fish breeding industry, and violated the relevant regulations of nature reserves and cultural relics protection and management, which is illegal and illegal construction.

In recent years, Gansu Province and Dunhuang City have organized working groups to investigate and guide problem rectification and conflict resolution work. However, Feitian’s demands were too high, resulting in the inability to completely resolve the conflict and the problem has not yet been rectified.

The picture shows the current distribution of land types in Yangguan Forest Farm in Dunhuang City in 2009 and 2020.

On-site exhibition board of the briefing

"The investigation team did not find any cutting of shaved heads or cutting down trees to plant grapes during the investigation." Tian Baohua, deputy director of the Gansu Forestry and Grassland Bureau, said that the next step will be to recover the illegal use of Dunhuang Wine Industry Co., Ltd. according to law. 567 acres of vineyards and jujube orchards are replanted as forest trees in time.

Tian Baohua said that the lost forest land will be collected and returned to the forest in time, the renovation and cultivation of forest trees will be standardized, and the management and utilization of water resources will be strengthened. Starting this year, the budget investment for the Yangguan Forest Farm will be increased year by year, and funds and projects will be obtained. , Support the construction and development of Yangguan Forest Farm through multiple channels; determine the tree tending plan before the start of afforestation this spring, reasonably determine the ratio of arbor irrigation, improve the forest management and protection system, strengthen the implementation of management and protection responsibilities, and ensure that the forest farm can maximize ecological benefits. (Finish)