Personalities demand that the age of consent be set at 15

Since Thursday, figures from the small and the big screen have taken a stand against a bill passed in the Senate 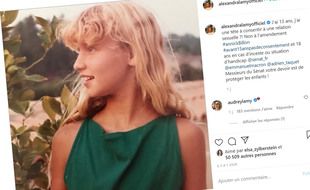 Alexandra Lamy is one of the personalities to have taken a position, in January 2021, for the minimum age of consent to be set at 15 years and not at 13 years.

On Thursday, the Senate unanimously adopted, at first reading, a bill to create a new sex crime to protect minors under 13.

The centrist Annick Billon, author of this bill explained that it is a question of posing in the law "a new prohibition: that of any sexual relationship with a minor of 13 years", without questioning the question of consent.

The offense would be constituted in the event of sexual penetration, of whatever nature, when the perpetrator knew or could not ignore the age of the victim.

In the process, several personalities were moved by this vote and took a stand for the minimum age of consent to be set at 15 years.

A claim made in messages on social networks accompanied by the hashtag # avant15anspasdeconsetement or # avant15anscestNON.

Do I have a head to consent to sex?

What's more, with a middle finger?

No to the @AnnickBillon amendment.

Consent threshold at 15 and 18 in the event of incest or disability. # Avant15anspasdeconsentement @EmmanuelMacron @AdrienTaquet pic.twitter.com/pmgMpmPmJ5

Do I have a head to consent to sex?

What's more, with a middle finger?

", Thus tweeted the actress Andréa Bescond to express her opposition to the amendment of Annick Billon.

“Threshold of consent at 15 and 18 in the event of incest or a situation of disability,” she added.

Andréa Bescond, victim of a pedophile, is the author of the play

, inspired by what she experienced as a child, which she brought to the big screen in 2018.

Alexandra Lamy, Marie Fugain, Mademoiselle Agnès, Laurence Boccolini or Xavier de Moulins, among others, also posted on Twitter or Instagram similar messages in comments to photos showing them at 13 or 14 years old.

And I was raped by David Hamilton.

Could I have consented?

Prohibiting and punishing sexual acts between adults and minors of 13 years old, what can that change?

With the hashtag #MeTooInceste, the victims' words are released on Twitter