Hamdan bin Mohammed: Our historical assets are a trust that we do not neglect to preserve

His Highness Sheikh Hamdan bin Mohammed bin Rashid Al Maktoum, Crown Prince of Dubai and Chairman of the Executive Council, affirmed that: “Al Fahidi Fort is one of the historical structures that enjoys a special place among the historical origins of Dubai, given the important stages of its development over more than 200 years, and its transformation. To model cities stick 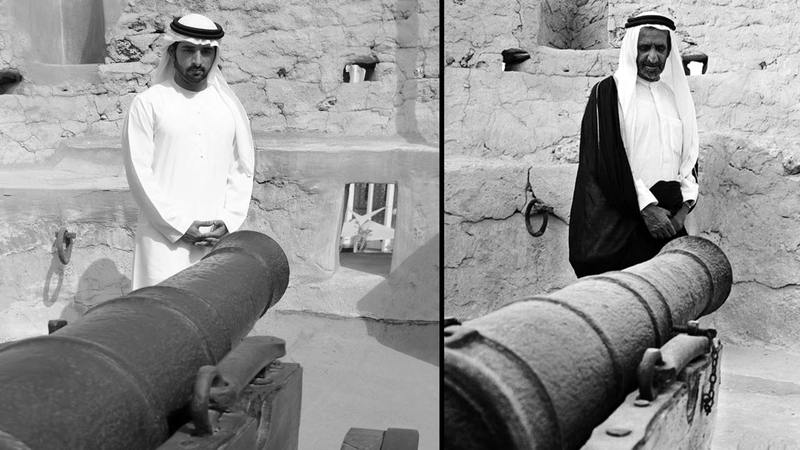 The rehabilitation project of Al Fahidi Fort was launched

Hamdan bin Mohammed: Our historical assets are a trust that we do not neglect to preserve

Hamdan bin Mohammed in front of one of the cannons of Al Fahidi Fort in the same place where his grandfather Rashid bin Saeed stood, who took the fort with special care.

His Highness Sheikh Hamdan bin Mohammed bin Rashid Al Maktoum, Crown Prince of Dubai and Chairman of the Executive Council, affirmed that: “Al Fahidi Fort is one of the historical structures that enjoys a special place among the historical origins of Dubai, given the important stages of its development over more than 200 years, and its transformation. To a model for modern cities keen to preserve their heritage and cultural heritage, and pursuant to the directives of His Highness Sheikh Mohammed bin Rashid Al Maktoum, Vice President and Prime Minister of the UAE and Ruler of Dubai, in the matter of preserving heritage buildings, and because of the great historical and cultural value of the building, we launched a rehabilitation project This edifice, to continue its role as a center of civilization radiation and an essential component of the cultural scene in Dubai. Our historical origins are a trust that we do not hesitate to preserve and preserve as an inspiring value for future generations.

This came on the occasion of the announcement of His Highness the Crown Prince of Dubai about the launch of the rehabilitation project of the historic Al Fahidi Fort, which hosts the Dubai Museum, the first museum of its kind to be established in the Emirate of Dubai, following in the footsteps of the late Sheikh Rashid bin Saeed Al Maktoum, may God rest his soul. In making Al Fahidi Fort a beacon of culture, and based on the national and historical responsibility in preserving Dubai's civilizational and cultural heritage.

A witness to our heritage

Her Highness Sheikha Latifa bint Mohammed bin Rashid Al Maktoum, Head of the Culture and Arts Authority in Dubai, Dubai Culture, said: “The Al Fahidi Fort stands as a testament to our rich heritage, and it is a prominent historical beacon that reflects our cultural identity and authentic values, and today this historical landmark acquires great importance, as it is One of the most famous cultural destinations in Dubai, this cultural edifice is a prominent stop on the map of local and international cultural tourism, as it is a destination for visitors from inside the country and for tourists from outside it, and the goal behind the renovation and restoration operations is to enhance the unique cultural experience of this historical landmark, and to provide it With an advanced system, in line with the future aspirations adopted by Dubai, and in an effort to raise the level of local cultural experiences, in a way that reflects positively on the status of our authentic heritage and the sustainability of our ancient Emirati traditions.

Since its inception until today, Al Fahidi Fort has witnessed a remarkable development throughout its long history, and the step of rehabilitating it is currently part of the mission of "Dubai Culture" in preserving and celebrating the local culture and the Emirati heritage, and its commitment to ensuring the protection of cultural heritage and the preservation of cultural and heritage assets in the best way. .

The museum will return in a wonderful new look, thus contributing to providing a rich and immersive cultural experience for its visitors, citizens, residents and tourists, keeping the relationship between them and museums intact, and enhancing the value of exploring history and its importance in launching into the future.

This cultural edifice is a milestone in the history of the Emirate of Dubai, as it is more than two centuries old, and it was built in 1787, on the southern side of the Dubai Creek, to be the seat of the ruler of the emirate, and this fort was restored during the reign of the late Sheikh Rashid bin Saeed Al Maktoum. May God rest his soul.

In 1971, the year of the founding of the federation, Al Fahidi Fort was inaugurated under the name "Dubai Museum" to be an official museum displaying the history of the emirate and important features of its original heritage.

- «This cultural edifice constitutes a prominent station on the map of local and international cultural tourism.

The development and expansion of this historical landmark continued, and the year 1995 witnessed the opening of the second section of the museum located under the castle, which embraces exhibits and collectibles that simulate life in the past before the discovery of oil, in addition to the antiquities discovered at Dubai's archaeological sites.

As a testament to the heritage and originality of Al Fahidi Fort, the Dubai Museum welcomed nearly 1.5 million visitors in 2019, and data indicates that, from 1975 to the end of 2019, the museum attracted about 17 million visitors from various groups of society.

The rehabilitation project of Al Fahidi Fort comes as part of the second phase of the project to develop and revitalize the Dubai Historic District, a joint project between the Culture and Arts Authority in Dubai, the Dubai Municipality and the Dubai Department of Tourism and Commerce Marketing, which aims to preserve and preserve historical monuments for future generations to enhance their belonging to their identity. Patriotism.

As part of the implementation plan of the rehabilitation project, Al Fahidi Fort will be closed temporarily, in preparation for the start of the works in the museum, and this step comes in view of the importance of the Dubai Museum, a testament to a long past that established a prosperous present in the emirate, as it is a platform that forms a link between community members and their past And their rich heritage and history.