An OpinionWay poll for Unesco's week of sound reveals that variety, pop and rock are good for the ears and heads of the French this year of crisis 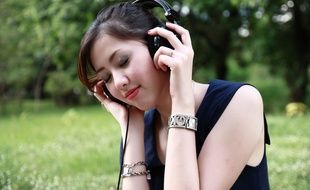 Illustration of a young woman listening to music on headphones.

On the occasion of its 18th edition, from January 18 to 31, Unesco's week of sound has commissioned the OpinionWay polling institute to find out how the French are going through the health crisis thanks to the sounds that make them feel good and those that they avoid.

Carried out on January 5 and 6, the poll reveals that for a large majority of French people (82%), music helps them keep morale.

Three in ten are even totally convinced of it.

French variety, pop and rock in the ears

For 78% of French people, music allows them to escape to forget the confinements, and for 75%, it reminds them of memories of a more carefree time.

What about the French playlists?

If no genre brings together the majority of French people, the French variety tops the list of musics that are good for morale, at 47% ahead of pop (31%) and rock (29%).

"It is urgent to become aware of the sociological but also economic, medical and societal issues which are played out today in our society through sound and in which music is one of the intergenerational stakeholders", commented Christian Hugonnet, President founder of the association La Semaine du Son.

Les Enfoirés 2021: Behind the scenes of the shooting of a concert ... without an audience

Vitaa and Slimane, Ninho, Maes ... The ranking of the biggest sellers of albums in 2020