Strike for the fourth consecutive day at L'Equipe, a first

L'Equipe will not appear on newsstands for the fourth consecutive day, a first in the history of the newspaper. Employees are protesting against a social plan which provides for the elimination of around fifty jobs. &amp; Nbsp; 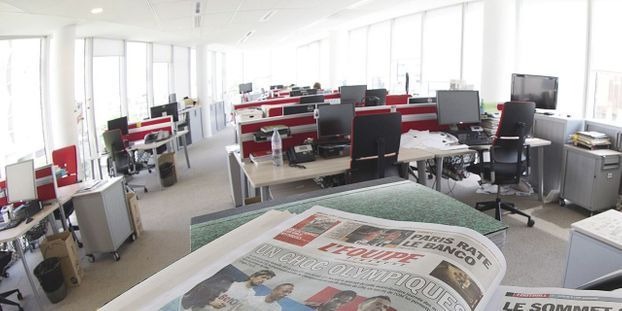 L'Equipe will not appear on newsstands for the fourth consecutive day, a first in the history of the newspaper.

Employees are protesting against a social plan which provides for the elimination of around fifty jobs.

Sports fans have to do without their favorite everyday life.

is not available on newsstands for the fourth consecutive day, due to a strike movement.

Employees are protesting against a social plan providing for the abolition of fifty jobs.

The strike, followed by 80% of the incumbents (excluding hierarchical superiors) since Friday, according to Francis Magois (SNJ), was renewed on Monday by the inter-union SNJ - SNJ-CGT - UFICT-CGT - SGLCE-CGT at the end of '' a general meeting by videoconference.

At the heart of the conflict, the employment safeguard plan unveiled in the fall by the management: it provides for the elimination of 47 journalist positions and eight administrative posts within SAS L'Equipe (the daily, the magazine,

, which is to become a monthly), which employs 350 people.

This plan must be accompanied by the creation of 12 positions intended to increase the number of paying digital subscribers, which brings the total of deleted positions, among journalists, to 35, according to the management, who declined to comment. .

At least five additional positions disappear with the end of the Sport and Style supplement, underline the unions.

Management notes that this change is independent of the reorganization planned for the SAS.

The unions demand the "withdrawal" of the PES, "or so" less job cuts and better starting conditions, "in any case the opening of negotiations", explained to AFP Stéphane Antoine (SNJ-CGT) , fearing forced departures.

"The signal sent is very bad" in the run-up to the 2024 Paris Games or the Rugby World Cup, also scheduled for France in 2023, explains a journalist from the Team who wished to remain anonymous.

The unions also regret the lack of reaction from management to their movement: the meeting to which they are invited on Tuesday afternoon to discuss the conditions of departure was "planned for a long time", according to Francis Magois (SNJ).

This meeting will be followed by a new general assembly to decide on the follow-up to the movement.

The PSE aims to achieve savings of 5 million euros, the group being faced with financial difficulties due to the health crisis and the decline in sales at the number of its flagship newspaper.