After being selected as the "Cultural Capital of East Asia", Shaoxing combed the cultural context to show the background of Jiangnan overseas

China News Service, Shaoxing, January 5 (Li Dian and Xie Panpan) The rain pierced Meiwu and the wind was on Liuqiao Bridge. Throughout the ages, the misty and rain Shaoxing described by literati and inkmen has become a typical representative of Jiangnan culture. Today, across the years, Zhejiang Shaoxing has been successfully selected as the "Cultural Capital of East Asia" in 2021.   As an impo 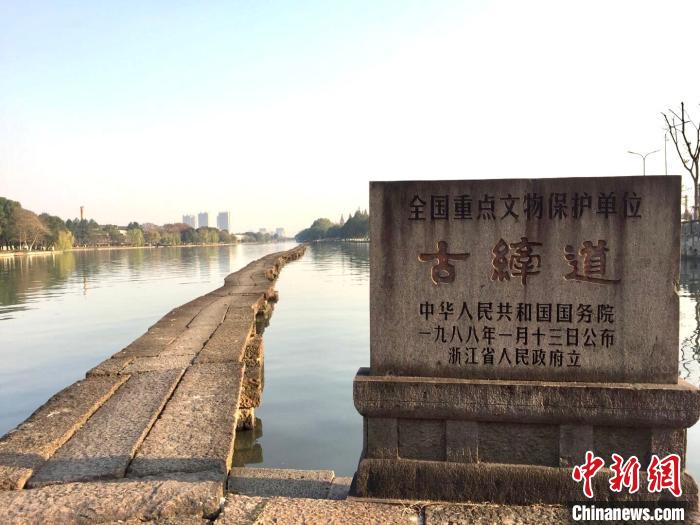 Throughout the ages, the misty and rain Shaoxing described by literati and inkmen has become a typical representative of Jiangnan culture.

Today, across the years, Zhejiang Shaoxing has been successfully selected as the "Cultural Capital of East Asia" in 2021.

As an important brand in the cultural field of China, Japan and South Korea, the "Cultural Capital of East Asia" aims to promote regional cultural cooperation and urban cultural construction in East Asia through various cultural activities.

Since its launch in 2013, 21 cities in 7 groups of the three countries have been elected as "Cultural Capitals of East Asia".

On December 20, 2020, the Ministry of Culture and Tourism issued an announcement that the "East Asian Capital of Culture" in 2021 will be selected by the three countries in Shaoxing and Dunhuang in China, Kitakyushu in Japan, and Suncheon in South Korea.

Shaoxing, by what kind of charm was elected the "Cultural Capital of East Asia"?

After being selected successfully, what development opportunities will this thousand-year-old city usher in?

Context stretches for thousands of years to write urban temperament

Since ancient times, there have been many celebrities in Jianhu and Taiwan, which gave birth to the book sage Wang Xizhi, the patriotic poet Lu You, the philosopher Wang Yangming, the Xinxi scholar Qiu Jin, and the national backbone Lu Xun.

In history, Shaoxing had 27 scholars and 2238 scholars in civil and military affairs; now, among the academicians of the "two academies", there are 77 Shaoxing scholars.

What follows immediately is a cultural story that thrives on people.

Walking in Shaoxing, known as the "museum without walls", the relics of Shun and Yu, the ancient site of Yue Kingdom, the hometown of Shusheng, the Tomb of Dayu, and the ancient canals, ancient bridges, ancient fiber roads and other historical relics show the city's profound Cultural heritage.

Lingshan and beautiful waters have shaped Shaoxing's unique cultural temperament, and the Jiangnan background of Chinese culture written has an important influence on East Asia.

"Shaoxing's celadon, rice wine, tea, Kuaiji bronze mirrors and other products were shipped overseas through the Maritime Silk Road, which also brought Chinese culture to East Asia." According to Ren Guiquan, deputy curator of Shaoxing Museum of Literature and History, and expert on the protection and utilization of Shaoxing ancient city, Many place names in Japan have imprinted the place names of Vietnam, which is one of the evidences that Shaoxing has influenced East Asia.

In addition, the Sanlunzong founded by Master Ji Zang of Jiaxiang Temple in Shaoxing was passed down to Korea and Japan by Hui Guan, a famous monk in Korea, and Hui Guan was revered as the first ancestor of the Sanlunzong in Japan. The Japanese Kukai and Yuanzhen once came to Shaoxing to seek Dharma and practice. , Brought a large number of Buddhist scriptures back to Japan, and returned to the country to establish a sect; a large number of Japanese monks and overseas students brought many calligraphy inscriptions such as Wang Xizhi, Wang Xianzhi and his son back to Japan...

Reclining the spirit show in the south, combing the cultural context

In August 2019, Ma Weiguang, Secretary of the Shaoxing Municipal Party Committee, participated in the final review of the candidate cities for the "Cultural Capital of East Asia" by the Ministry of Culture and Tourism and said: "We will organize various activities with high standards and attract social forces to participate in order to promote East Asian cultural exchanges and cooperation. Make Shaoxing contributions.” In April 2020, Shaoxing Municipal Party Committee and Mayor Sheng Yuechun delivered the "Government Work Report" at the Fifth Session of the Eighth People's Congress of Shaoxing City, clearly proposing to strive for the "Cultural Capital of East Asia."

Relying on its strong cultural heritage and natural resources, Shaoxing has carefully planned the application for the "Cultural Capital of East Asia" around its own cultural resource endowment, the construction of public cultural services, the living inheritance of intangible cultural heritage, and the integration of culture and tourism.

In the top-level design, Shaoxing formulated and implemented the three-year plan for the establishment of the "East Asian Cultural Capital".

While advancing a number of major cultural tourism projects such as the Yellow Wine Town, Xuwei Art Museum, and the East Zhejiang Canal Museum, the site is based on the theme of "a thousand years of cultural heritage, seeking dreams in Shaoxing", using local characteristic elements such as calligraphy, rice wine, and Yangming culture Come systematically and comprehensively show the world the unique style of Shaoxing, an oriental water city and a historical city.

On the other hand, the place has increased its cultural protection and inheritance.

Take its intangible cultural heritage work as an example.

While guarding the cultural "rare wine", the local area has also increased its efforts to spread it to the outside world, so that the "wine fragrance" can spread far and wide at home and abroad.

In recent years, with the development of public sacrifices to the Mausoleum of Dayu, Lanting Calligraphy Festival, Yangming Xinxue Conference, and "Master Dialogue", Shaoxing has become a highland of Chinese learning, a holy place for Xinxue, and a place of calligraphy pilgrimage recognized by East Asian countries.

Speaking of this, He Junjie, deputy director of the Propaganda Department of Shaoxing Municipal Party Committee and director of the Municipal Bureau of Culture, Radio, Film and Tourism, said frankly that this kind of influence and exchange has made Shaoxing a place that more and more East Asian tourists desire.

As an important city on the Maritime Silk Road, Shaoxing has a long history of cultural exchanges with East Asian countries such as Japan and South Korea.

At the same time, Shaoxing has very close economic and trade exchanges with Japan and South Korea.

Shaoxing enterprises and Japanese and Korean enterprises have built many major cooperation projects.

Today, leveraging on the "Cultural Capital of East Asia", Shaoxing will continue to polish the "golden sign" of exchanges with East Asian countries such as Japan and South Korea.

"The development of Shaoxing's cultural exchanges with Japan, South Korea and other countries can promote cultural tolerance, learn from each other, and maintain the diversity of East Asian culture." He Junjie said.

The establishment of the "City of East Asian Culture" in Shaoxing, a thousand-year-old city, has also inspired many overseas Chinese at home and abroad.

Xia Lianggen, president of the Shaoxing Association of Japan, participated in the 2014 first "Cultural Capital of East Asia" event held in Yokohama, Japan.

"Shaoxing has a deep connection with Japan. Lu Xun's novel "Hometown" was selected as a middle school textbook in Japan. Shaoxing rice wine is loved by many Japanese people. The Japanese really like the atmosphere of Shaoxing Jiangnan water village with pink walls and black tiles." He looked forward to. Shaoxing, selected as the "Cultural Capital of East Asia", can attract more Japanese people to Shaoxing for sightseeing and drive related enterprises to invest in Shaoxing.

"It is hoped that through the cultural platform of the'Cultural Capital of East Asia', in the near future, Tokyo will have a restaurant that can taste various Shaoxing rice wine and Shaoxing delicacies, and become a base for the spread of Shaoxing culture."

"The reputation of the'Cultural City of East Asia' will better attract the attention of Japan, South Korea and other countries to Shaoxing, and it will be an important platform for the world to better understand the ancient city of Shaoxing, and it will open up a wave of cultural studies on Shaoxing in East Asian countries." New Zealand Shaoxing Hall During the interview, the curator Zeng Xian said that this ancient city, known as the country of wine, water, bridge, calligraphy, and opera, will welcome more friends from the world.

But being selected is just the beginning.

In He Junjie's view, the "Cultural Capital of East Asia" is not just a title, but a process of development and improvement of urban cultural functions under higher requirements.

"Building the'East Asian Cultural Capital' is not an easy task. There are a number of specific and quantitative assessment indicators for urban cultural traditions, related hardware facilities, public cultural service systems, intangible cultural heritage protection and inheritance, etc., and are dynamic with the development of the times Change.” He bluntly said that for Shaoxing, this just provides a specific direction for urban cultural construction. While getting closer to the construction standards of the "Cultural Capital of East Asia", the cultural function of the city itself has also been continuously improved.

The Canal Cultural Belt, the Cultural Belt of the Road of Tang Poetry in Eastern Zhejiang... the cultural symbols have been beaded into chains to help Shaoxing grow into the "Cultural Capital of East Asia", which will show the charm of Chinese culture in foreign exchanges.

Business 2022-02-22T07:24:51.291Z
County Observation: How did the thousand-year-old ancient city transform into a "hundred billion new city"?
Sports 2022-05-07T01:00:51.063Z
Hangzhou Asian Games officially announced the postponement of the sports event
News/Politics 2022-03-14T13:09:31.183Z
East-West Question丨Lu Zaixian: The establishment of diplomatic relations between South Korea and China has entered the "year of establishment", how can the relationship between the two countries be improved and upgraded?
ADS
Life/Entertain 2022-05-15T12:48:36.882Z
The exhibition of bronze ware unearthed in Baoji debuted in Hangzhou, Zhejiang, and other cultural relics
Life/Entertain 2022-03-19T15:12:30.703Z
[East and West Questions] Wang Qi: Why is the unique copper galloping horse a cultural symbol of East-West communication? -Chinanews.com video
News/Politics 2022-04-19T11:47:52.973Z
East-West Question丨Xiong Zhaoming: Why was the "Roman Glass Bowl" unearthed from the Han Tomb in Guangxi?
Life/Entertain 2022-02-27T05:20:29.629Z
Nyingchi, Tibet selects "Peach Blossom Fairy" to promote local tourism culture
News/Politics 2022-04-15T12:21:59.100Z
East-West Question | Han Jianye: When did the early human cultural exchange break through the barrier of thousands of miles?
News/Politics 2022-04-09T12:19:44.198Z
Dongxi Question | Zeng Xiaomin: How does Chinese opera bridge the cultural gap and show the "real China"?