"Black Face Doctor" Yi Fan's Road to Rebirth: Strive to return to the operating table as soon as possible

Face to Face丨The Rebirth of "Black Face Doctor" Yi Fan: Strive to return to the operating table as soon as possible   The past 2020 has been a year of gratitude and hope for Yi Fan, a cardiovascular surgeon at Wuhan Central Hospital and his family.   This year, many people walked side by side with them for a period of dangerous time. Difficult rescue "The worst result at the time might be that 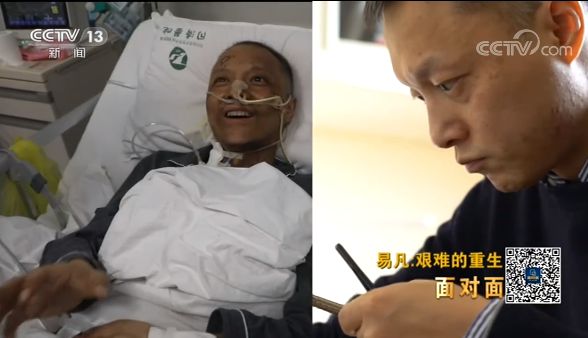 Face to Face丨The Rebirth of "Black Face Doctor" Yi Fan: Strive to return to the operating table as soon as possible

The past 2020 has been a year of gratitude and hope for Yi Fan, a cardiovascular surgeon at Wuhan Central Hospital and his family.

This year, many people walked side by side with them for a period of dangerous time.

Yi Fan is a cardiovascular surgeon in Wuhan Central Hospital.

On January 22, 2020, during the operation on the patient, Yi Fan suffered from physical discomfort. After CT and blood routine examinations, he was diagnosed with new coronary pneumonia and changed from a doctor to a patient.

Yi Fan was first admitted to Wuhan Central Hospital and then transferred to Wuhan Pulmonary Hospital.

As his condition continued to worsen, the medical staff intubated him for rescue, got on a ventilator, and used the ECMO life support system.

I didn’t expect it to be so heavy at first, but then I became scared when I was intubated. All the intubation doctors and colleagues who persuaded me to intubate told me with tears in their eyes. The worst result at the time might be that I could not wake .

Before the intubation, Yi Fan tried to call his wife Sun Yingjie. He wanted to explain something to his wife, but that day, his wife's mobile phone was locked in the house and Yi Fan did not explain anything.

After the intubation treatment started, Yi Fan's condition continued to deteriorate and he fell into a severe coma.

On March 3, Zhan Qingyuan, head of the critical illness treatment team of the National Aid Hubei Anti-epidemic Medical Team of the China-Japan Friendship Hospital, led the team to take over the emergency rescue mission of Yi Fan.

As an expert in respiratory and critical care medicine at the China-Japan Friendship Hospital, Zhan Qingyuan led a team to take over a critically ill area in the Sino-French New City campus of Wuhan Tongji Hospital.

When he took over Yi Fan, he had been stationed in Wuhan for 32 days.

I may not be able to save it. If any machine on the road has a problem, it will be fatal if the machine does not turn or the pipe falls off.

If he doesn't pick it up, I can understand it. If you pick up a severe patient, your death rate will go up if you get it in your hands. It's definitely not good for you.

We are colleagues. He was unfortunately infected at work. I want to save him in public, private and reasonable.

I told my colleague at the time that we all went to the river to swim together. He fell into the river and was flooded and was about to drown. I can swim myself and even bring a swimming ring. Can you say I can’t save him?

I must save him.

On the third day of transfer, under the guidance of Wang Chen, an academician of the Chinese Academy of Engineering, the medical team performed a tracheotomy for Yi Fan.

If the trachea is not cut open, I have to use a lot of sedatives with the tube in my mouth, and I can't wake up all the time, and I can't cough up sputum.

The sedatives can be stopped after the trachea is cut, and I have reflexes, which is helpful for the recovery of the disease.

Yi Fan and his wife, Sun Yingjie, have a daughter. After the outbreak, her daughter was sent to her grandma's home.

After Yi Fan was admitted to the hospital, only Sun Yingjie remained in the family, waiting for news from the hospital alone.

The leaders of the hospital call me almost every day, and many friends tell me that we are always by your side, where you need it.

Including turning on his mobile phone, I saw a patient he treated and sent him a text message, saying, "I saw the news on the Internet that I knew you were infected. I was uncomfortable. The news said that you need plasma. I don't know if my blood is available. I'll use it for you." At that moment, I felt that being a doctor was not in vain. Even if he gave his life, it was worth it.

On March 7, the fourth day of transfer, Yi Fan woke up from a 35-day coma.

The doctor, friends and Sun Yingjie finally waited for this day.

Before I woke up, I didn't know anything, my head was full of hallucinations.

After getting a little clearer, I asked them to show me my infusion sheet. After reading it, I was shocked. The top antibiotics were used, which proved that my infection was serious.

I don’t usually use such heavy antibiotics. It’s really not easy for me to survive.

Before he woke up, his doctor in charge contacted me and said that you can record some videos at home, or find some sounds and photos he likes, so that he will not be alone when he wakes up.

I called my daughter that night, and I said my dad might be waking up soon. What do you say to dad?

The daughter made a handbook for patients with COVID-19. It contains what dad might want to say when he wakes up, and what dad needs.

We probably got it into the early morning that day, and the next morning I took this booklet to the hospital and asked my colleagues to pass it in.

"The most important thing now is the family"

On March 15, Yi Fan's condition improved significantly, and the medical team removed the ECMO life support system for him.

On May 6, Yi Fan, who fought against the new crown virus for 99 days, finally walked out of the hospital.

I went over to pick him up, and the moment they handed Yi Fan into my hands, I was a little confused.

They said you were going over soon, and your husband was here, but I was at a loss at that moment.

It was my most dull day in the past month or two, and this happiness surprised me a bit.

When asked what is particularly important when escaping from Guimen Pass, Yi Fan's answer is family.

In the past, I owed them a lot, so I had to slowly replenish them. After I came back, I would basically stay at home. I stayed at home 24 hours a day and watched them busy with their homework. But now that there are fewer posts, I can avoid criticizing her as much as possible.

Yi Fan and Sun Yingjie met and fell in love during the 2003 SARS epidemic.

June 28 is the wedding anniversary of the two. On this day of this year, Yi Fan, who is still recovering, gave his wife and daughter a special commemoration.

He is actually a person who doesn't know much about romance. He was still in the process of recovering that day, and he forced our family of three into the restaurant.

When I entered, I saw that the red stone was in the shape of a heart. I was so touched at the time that tears could not help but flow out.

When the three of us raised the wine glasses that day, although there were pure water in them, at that moment I felt that this kind of celebration of this kind of ritual was really long-lost.

I did complain before that he devoted too little time to this home.

But when he was in a coma these days, when he couldn't communicate with me, I learned that as a doctor, his efforts have been recognized a lot.

In the future, Yifan can help more patients, which is what I want most now.

I feel that if you love someone, you have to support what he loves. When he works hard to bring health and peace to the patient, I think everything is worth it.

All I can do is

he guards the patient, and I guard him

Rebirth from the beginning

After rebirth, Yi Fan means that many things have to be learned from scratch.

The challenge began when he took down ECMO and removed all pipelines.

On the day I took down ECMO, do you know why Director Zhan used cotton swabs to feed me water?

Because I lost the ability to swallow, then I started to learn from drinking water and taking medicine.

More than a month has passed, and my food is only slightly better.

To be honest, I was a little discouraged at that time, and I couldn't even reach these basic functions. How can I recover?

But the people around me are helping me, what to eat every day, how much to eat, how much to take from the nasogastric tube, and how much to take by mouth, all are well calculated for me, repeatedly to stimulate you, let you remember these instincts, Get restored.

This is a must for cardiology surgery. Although my hands are still a bit trembling, I am struggling to recover in half a year.

The hands that used to be very flexible are now shaking.

Watching him practice, I was a little sad at first, but when I saw him improve day by day, I was grateful.

Such a process carries the power of tens of thousands of people. This is a hope that he will help more patients in the future.