Creative: Singing poetry reinforces the presence of our beautiful language

Emirati and Arab creators emphasized that singing Arabic poetry brings the singularity closer to the recipients, and the presence of beautiful poems reinforces the consciousness of societies and people's lives, pointing to the poet’s role in enhancing the taste of generations with all his poems and aesthetics. This came during the event of the dialogue / poetic meeting. 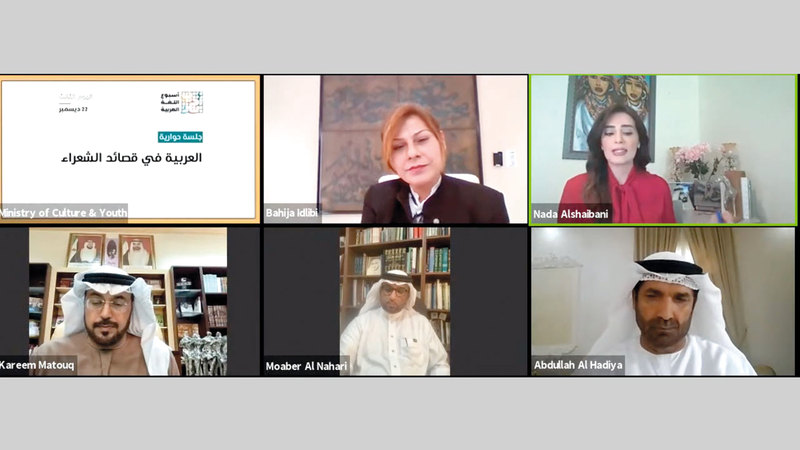 “Culture” hosts a dialogue meeting within the “Al Arabiya” week

Creative: Singing poetry reinforces the presence of our beautiful language

Participants in the event, which was titled: «The Arabic Poems of Poets».

Emirati and Arab creators emphasized that singing Arabic poetry brings the singularity closer to the recipients, and reinforces the presence of beautiful poems in the consciousness of societies and people's lives, pointing to the poet's role in enhancing the taste of generations with all his poems and aesthetics.

This came during the dialogue / poetry event that was organized within the activities of the Arabic Language Week, and in conjunction with the Ministry of Culture and Youth launching the report on the state of the Arabic language.

The meeting included a musical presence by Faraj Abyad in performing the maqam “Belong to others, oh my beloved,” and his singing a poem by Emirati poet Amal Al-Sahlawi entitled “With all the oddities of life, test me.”

The meeting also witnessed the participants' dialogue about the Arabic language and its position in Arab life and conscience, how to choose titles for poems as thresholds for the text, the extent to which the poetic text conforms to its place and time in particular, and the poetic inspiration that the Arabic language stimulates with its aesthetics, rhetoric and statement, and the importance of singing the eloquent poetic vocabulary to be rooted in the conscience of generations and memory People.

Abdullah Al-Hediya praised the role of the Ministry of Culture and Youth, and the importance of organizing the activities of the Arabic language and its vision in preserving them, considering that “poetry is present on all occasions, and it is the father of all expressive styles. The Arab is not detached from poetry wherever and whenever it is, and it is not weaned from poetry that remains an obsession that drives generations ».

As for Karim Maatouk, he believed that the poem is the primary influence in existence and conscience when it is present on various occasions in our daily life, and that the poet has a destiny and role in the immortality of the vocabulary and the firmness of meaning.

For her part, Bahija Idlibi asserted that "poetry is an experiment in language, and it is he who explores it ... and poetry will remain, and we, as Arabs, are children of our poetry."

While Al-Nahari crossing considered that "the Arabs are still in their eternal historical relationship of love for poetry and language through it, with some unfortunately feeling helpless to express in their mother tongue."

On the poems' titles and how poets choose them, Karim Maatouk said that the poet is keen to make the title a key to the poem and a threshold for immersion in its meanings.

While Bahija Idlibi saw that she does not read the title because the title is the text itself, and she chooses the title with the beauty of the meaning first, and selects for her texts the titles that attract the poet himself first as an emotional function.

Regarding the recipient of poetry, Al-Nahari crossing said that the mission of the poem is to address the ordinary recipient, not only the elite, so the poet must go down to the level of the recipient in order to raise the status of the Arabic language, stressing the importance of the poets ’dealings with modern technologies and social media.

The duty of every Arab

An intervention by Abdullah al-Hidiyah centered around the fact that the Arabic language derives its sanctity from the sanctity of the Holy Qur’an and the exhilaration of spirit and faith in our Islamic faith, adding that it is the duty of every Arab person to pay attention to the advancement of the language of the Dhad, especially the poets, praising the poems that were sung from the eyes of Arab poetry, which immortalized poetry with singing On the tongues of people: «Poets and poetry complain of lack of care and attention, but if we remained on these tragedies, we would not have reached anything. Rather, we all need to consider the poem as our special project that immortalizes us.

Bahija Idlibi emphasized that singing Arabic poetry brings the poetic term closer to the recipients and reinforces its presence in the consciousness of societies and people's lives.

Al-Nahari crossing described music as the finest expression in the creative ladder, with poetry spreading and the poet famous.

On the other hand, Karim Maatouk pointed out that singing should reduce poetry and deal with weak poetry and its strength is not suitable for singing, and the evidence is that Al-Mutanabbi’s poetry is not sung, pointing out that lyric poetry is a specialized field in which those who master their tools and vocabulary dive into.

The event included the participating poets reciting a set of their texts and poems. The meeting was initiated by the poet Karim Matouk with his two poems "A Short Biography" and "Iraq".

Bahija Idlibi recited poems, “She Said to Her Mirror,” “Being,” and “Fayd al-Noon.”

Al-Nahari read the poems, “The Ahadiths of the Poem,” “The Seven Hims,” and “A Vision Philosophy by the Ink.”

As for Abdullah al-Hediya, he recited the poem “The Strings of Delights” and “The Talisman of Dhad”.

• “We need to consider the poem our special project that immortalizes us.”

• “Poetry is an experiment in language ... and we, as Arabs, are sons of our poetry.”

• “Music is the finest form of expression, and poetry and its owner are spread through it.”